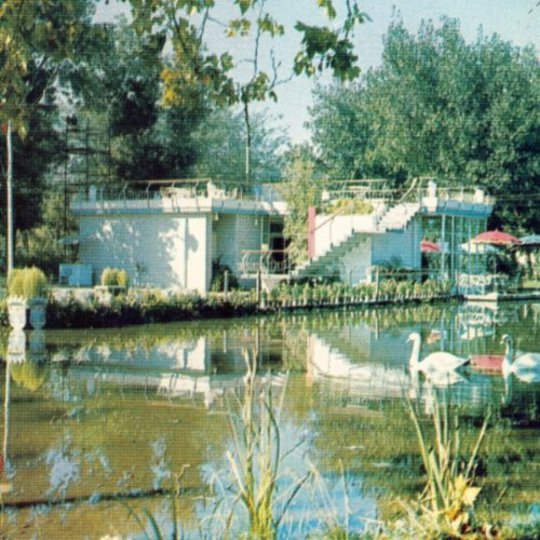 Regardless of its Wire-assisted etymology and the basic ideas underpinning its use, ‘hypnagogic pop’ as a term has become so widely used – and misused – that its usefulness as a signifier for a certain musical aesthetic has diminished to a fragment of its initial potency. That view, of course, depends largely on whether you subscribed to it in the first place, though in the case of The Skaters and Matthew Mondanile’s music as Ducktails, the idea carried a certain blurry charm. Alongside records like James Ferraro’s mercurial and beautiful Last American Hero, with its Judge Judy and Best Buy fetishising/satirizing (the line is so thin) artwork, Mondanile’s earlier material achieved a peculiar, dreamlike transcendence through memories of the mundane and the ordinary. The problem arose when, with so many other musicians, the same basic sound palette resulted in empty and weightless nostalgia trips.

So it’s perhaps unsurprising that Arcade Dynamics, Mondanile’s first since the oversaturated bliss that was Landscapes (which came out on the scarily consistent Olde English Spelling Bee label), takes several strides away from the sound he’d come to help define. It’s certainly hard not to wonder whether it’s at least partially intentional. Everything’s come into sharper focus, as though a Polaroid lens has shifted slightly, and he avoids the deep shades of his earlier work in favour of lighter sepia tones. Openers ‘In The Swing’ and ‘Hamilton Road’ explore breezy summertime pop, the kind that’s so lightweight you can almost imagine it suddenly disappearing in a particularly strong gust of wind. If that sounds harsh, it’s not intended to be. It’s rather that compared to the overdriven sensory blast of Landscapes’ ‘Landrunner’, this new mode is soporific, more akin to a half-asleep daydream than a full-on spiral into the REM sleep vortex.

Mondanile’s still preoccupied with the passing of time and its symbols – the treehouse, rippling tides, passive references to childhood – that could easily keep him anchored to previous reference points. And indeed, there was always more to hypnagogia than murky debts to the Seventies and Eighties and simplistic dreamlike wonder. But the crucial difference, throughout Arcade Dynamics, is that it’s able to stand clear of the wider context Ducktails has always ended up placed within. The Noah Lennox-featuring ‘Killin’ The Vibe’ is ample evidence of that – in a post-Animal Collective indie world, it requires little explanation – it’s simply a sweet, tantalisingly short pop song. Just as with the rest of Arcade Dynamics it’s little more than a vignette, a couple of minutes long, fading out almost too soon before leading into the next brief reverie. As an entity it’s perhaps best seen as the siesta to Landscapes’ nocturnal astral tryst – lighter and less intensely psychedelic, but immensely enjoyable nonetheless.