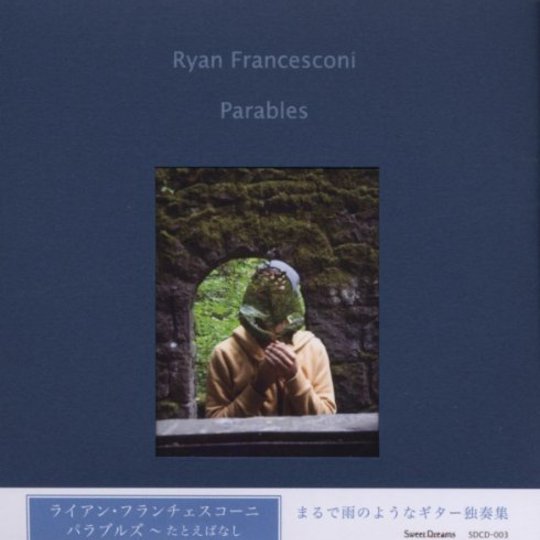 Parables. This is not the preaching’s of the man in a white gown with an abundance of facial hair, informing us and his disciples and followers of earthly stories with spiritual truths about good Samaritans, unforgiving servants and lost sheep.

Instead what we have here is the latest effort from composer, guitarist and Balkan musician Ryan Francesconi. A man whose name may sound like he’s just walked off of the set of The Sopranos, kitted out in a double breasted suit with a cigar the size of a Toblerone hanging out of his mouth, but this is in fact a misconception of a man who has produced a short album, or long EP, whichever you prefer, of him and his classical guitar.

There is no denying this man can play the guitar well, as I’m sure he hits every single note possible up and down the fret board in most tracks, within the space of three minutes, making melodies which at times sound like the soundtrack to a time where people said noble steed instead of horse and tavern instead of pub. If I’m to get philosophical there’s a mysticism about his music which captures you, and the complex rhythms influenced by music of South-Eastern Europe shine throughout the album (or long EP).

I only had one hang up about Parables and that’s that I don’t particularly like too much of one thing. I’m not a greedy person. I’ve never liked over indulging myself; by the end of Parables I was slightly exhausted with Francesconi’s guitar playing. Although each track is masterfully composed in its own right, it still didn’t detract my thoughts from longing for a bit of diversity, not the dance act, but something other than Francesconi picking at six guitar strings whilst hammering down and pulling off his quick little fingers on various played notes. All I wanted were some vocals, or a bass guitar, or drums, or synths, or bongos, or saxophones, or cellos, or whatever, the two old blokes from Los del Rio would have done, just something other than Francesconi and his classical guitar.

Unfortunately nothing else followed.

As a result I can only commend this album on successfully annoying me. For those of you into your alternative music consisting of bands, dance music, techno beats, iniquitous synth sounds from electronic music, or even Baltimore strip club ghetto tech, I can’t imagine Parables is the one for you, but rather for someone who either a) teaches classical guitar playing or b) someone who can actually truly appreciate the complexities behind Francesconi’s guitar playing, rather than someone like myself wishing for the singers of the ‘Hey Macarena’ to come in and spice up the record.