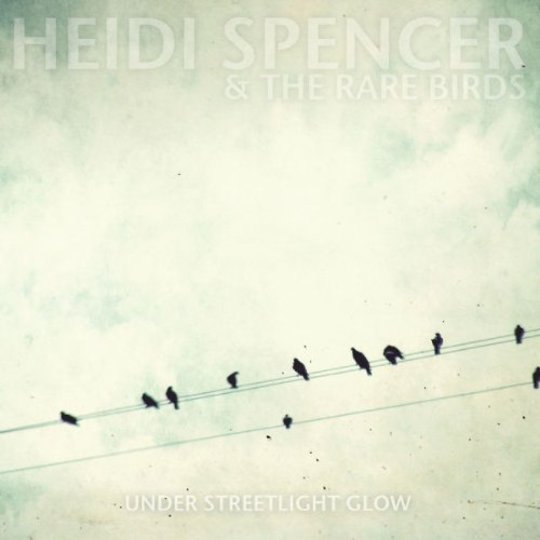 These days, it appears that you can’t stroll through any major musical city without entreating on the sweet, smoky tones of some jazz-inflected chanteuse. It has become one of the most defining musical trends of the last decade or so: late night tales of heartbreak and cigarettes metaphorically cutting patterns in the thick evening air. In the case of Amy Winehouse of course, this means literally cutting and scrawling patterns with bottles and cigarettes on anything or quite possibly anyone she can lay her hands on. But we’ll leave that one right there at the door, shall we?! It’s too early in the year for lawsuits…

Into the auditorium, stage left, enters Heidi Spencer. Born and raised in Milwaukee, her debut album Under Streetlight Glow arrives in the first month of 2011. Based upon music that she composed for film school projects, the album is a collection of songs that slow-burn effortlessly through a whiskey-haze musical brazier: authentic and complimentary to the ears. The difficulty of trying to make an indelible mark on this genre however, is that there are many, many people trying to play this particular musical game. And although Heidi Spencer has several unique attributes that draw the attention and the senses, Under Streetlight Glow seems to spend its entire lifespan justifying its existence; prodding, nagging and cajoling to convince you. And it doesn’t entirely succeed in its objectives.

The good points. First off, the sound and production of the record is fantastic. It is beautifully textured, wonderfully layered with the creak and crackle of every instrument being faithfully reproduced; as if the group of exceptional musicians that comprise The Rare Birds were sitting across from you on your sofa, supping liquor from cut-glass tumblers. Secondly, Heidi has one of those mystically divisive voices (Open file / Search: 'Joanna Newsom'); if it happens to truly speak to you, you'll instantly fall in love, entranced by its sorcery and indeterminable mystery as she spins words around her tongue like ships caught in an enchanted sea. Thankfully, I do get it: it’s a beautiful voice, a beacon, a one of a kind blend of quirk, crack and longing. There aren’t enough people in the world who sing like this.

Despite all this, Under Streetlight Glow suffers from one significant, unresolved and terminal flaw: it is cripplingly one paced and one dimensional. Despite the prettiness of the musical scenery draping the project, there is simply not enough cloth to cover the fact that Under Streetlight Glow works perfectly well as a piece of background music or as a soundtrack for seduction, but when subjected to close introspection, it becomes unforgivably tedious after a short period of time. Shifts in dynamics, tempo or musical theme are practically absent to the point where you start hearing the same chord sequences and begin quizzically fumbling through frames of déjà vu. The press release makes reference to the songs being 'pared down'. Which is fine, in principle; so many records are destroyed by unwarranted bluster. But to maintain a dividing line between spectral and sedate, you need some form of catalyst to pull your ears and intellect on past each track, striving to hear the next episode in the story. And unfortunately, despite each and every song having some individual merit, the overall combination is too similar to be truly appetising, akin to a wedding buffet comprised entirely of sandwiches. Even if they’re made from smoked salmon and caviar, you’re going to get bored before too long.

The album does eventually rally on the final couplet of tracks: ‘Tried and True’ and ‘Whiskey’, whereupon the record finally shifts a gear and ghosts of piano start to apparate inside the recording console channels. But it’s hard to imagine too many people being enraptured enough to devote their undivided attentions up until this point. In fairness, there isn’t a bad track on the album; not one. But on the same scale, nor is their anything particularly inspirational, standout or striking. It forever remains in the middle lane, watching the fuel consumption and taking care of the tyres.

The most frustrating thing about Under Streetlight Glow is that it has so much potential left unused and unsatisfied behind the strings and wires. As a musical collective, they are profound, delicious and authentic in a way that you seldom come across outside of obscure, dusty American folk recordings. And Heidi is a potential star: a voice of sincere beauty and rare starkness. Ultimately however, her infant tongue simply doesn’t have the tales to tell and her songs are too sleepy and laconic to convince you of their true worth. Fundamentally, this failure to thrive is what defines the record as being a disappointment. If these average songs existed without the mercurial glow burning beneath the surface, you could unconcernedly dismiss it as another so-so album. The presence of such unfulfilled promise however, makes Heidi’s off-centre arrow so much harder to bear.