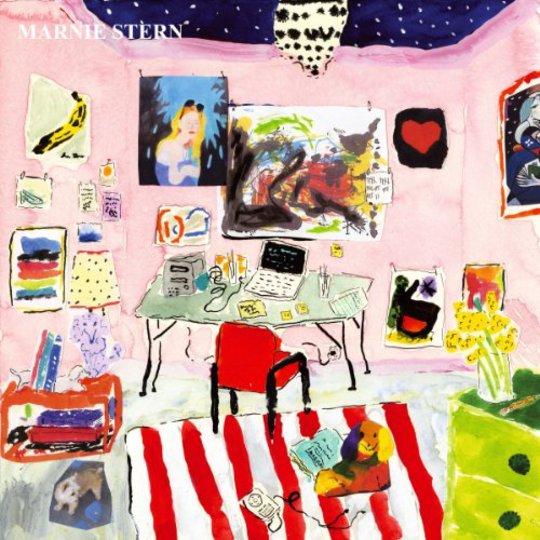 It takes a helluva lot of contextualizing to see Marnie Stern as the 'anthemic' or 'pop' end of any genre, however extreme… or noodley… or noisy… or weird its other exponents (say: Hella, Deerhoof, Ponytail, Ocrilim) might be. Still, it’s no less integral to Stern’s sound than the guitar shredding that she chants (playground style), she hollers, and she "Hey!"s fit to please any crowd - when she’s not processing, chopping-up and multi-tracking her voice like every spangly-toned pop, R&B, or hip-hop vocalist in the charts… except entirely unlike most of them, because it’s in approximation of her myriad-mindedness, rather than the bleating tones of sheep with vocoders. Two of the best tracks here – ‘For Ash’ and ‘Transparency Is the New Mystery’ – evoke the bizarre image of the greatest stadium gig ever... for an audience entirely comprised of elves. Still, both offer irreducibly simple, and heart-bursting sentiments: “I-I-I-I-I……mi-i-i-i-i-i-i-ss…yourrrrr… smile / I-i-i-i-i-t’s… be-e-e-e-e-en……a… while.” You’ve probably heard both MP3s by now, if you’re not a newcomer, but this is a tremendous album as a whole.

'Compromised' and 'accessible' aren’t words you want to associate with your favourite artists in case you deter potential fans, yet it’s undeniable that for her self-titled third album, Marnie Stern has made some canny decisions. For a start: ten songs in 34 minutes, which practically begs you to listen to it several times a day. This Is It… (2008), her second album, was a shiny beast, but with the guitar-shredding to the fore, and an overly compressed production, it took a while to appreciate just how good each song was, and how different; this time round, several of the tracks are built around huge, stomping riffs, with the speedier guitar lines mixed further back to create more space, without sacrificing that-which-is-Marnie. Basically, ‘The Crippled Jazzer’ (the last album’s highlight) is the main reference point, as we might have hoped.

How does it stand up next to her iconic debut, though? In Advance of the Broken Arm (2007) was a lightning bolt; nonetheless, it turns out it was easy to overlook the run of lyrically sparse, heads-down rock songs toward the end. This time, the impulse to have a face-off with Zach Hill – trading wild guitar-lines for chaotic kit-battering, without trying to articulate any emotion besides RAWK – is confined to one track (‘Gimme’), although that’s not to say there aren’t others that hit hard as well as fast. There’s plenty of continuity with the previous albums, and the final track (‘The Things You Notice’) points toward another new direction: a spacious, percussion-free piece with distorted guitars showering down gently on a comparatively relaxed guitar-line, moving away from the frantic pace and self-laceratingly shrill tones that accompanied so many lyrics about loss.

Lyrics. What’s surprising (personally) is how much the album’s major omission doesn’t detract from its enjoyment. There’s this widespread notion that lyrics matter less than music, or not at all, and that metaphorically rich, or narratively ingenious lyrics are a nice bonus but kinda extraneous outside twee, folky music. Plenty of intelligent, literate people who genuinely love music profess these very ideas, and don’t seem to notice that canonical classics and their own personal favourites (alike) are – by and large – characterized by intelligible vocals (however stylized / strangled / angry / whatever), and lyrics that could stand up as poetry, oratory, or in some cases, stand-up; the fact is, there are plenty of albums with good tunes, but words are what bring you back, and just maybe the people who use words best can articulate what they want better, when they’re discovering new arrangements. Just a thought. Anyhow… Marnie Stern’s first two albums had wildly ambitious concepts – the first, travelling back in time through anthropology, history, mythology, poetry and philosophy; the second travelling forwards through maths, science, and allusions to Eighties pop culture at its most Futurist – in both cases, trying to share or just describe that experience of feeling outside time, when you’re in the white heat of creation, and also when you’re in love. This is why I’ve compared Marnie Stern to Joanna Newsom in the past, more than Sleater-Kinney, and why I’m saying it again (until those albums are hailed as benchmarks for songwriting). In this respect, Marnie Stern is a slight departure from that first pair (hence the name?) but if she feels she has less to prove, and less to say right now, then there’s still plenty to feel, and she’s more than deserved a chance to stop analysing and just express some joy.

The Age of Adz