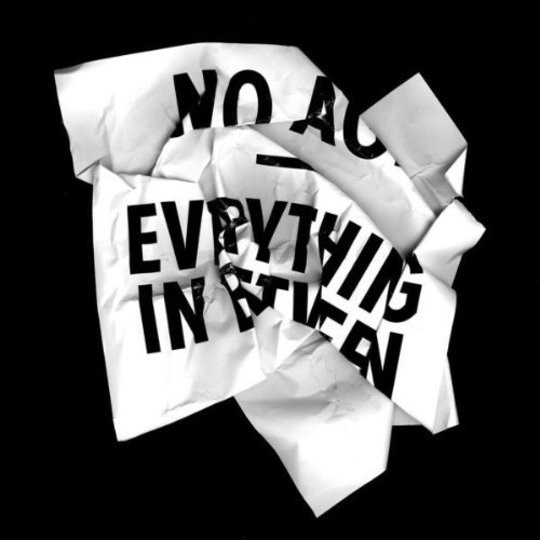 Lurking at the heart of No Age's explosive racket, - admittedly shrouded in incandescent curtains of guitar and hand-assembled samplework - there has always been a pop band dying to escape. For all its eardrum-shattering tendencies, the duo's debut album proper Nouns was a soothing listen, as if noise in just the right quantity and form could mutate into something soft and all-enveloping. And given half a chance - the crystalline chord stabs of 'Eraser' or the redemptive blast of distortion that heralded album opener 'Miner' - that melodic sensibility seized the chance to jump to the fore. Their staunchly DIY approach and tendency to bury their songs in turbid, saturated murk were merely cloaking devices - they're still present and correct on the follow up, Everything In Between, but Randy Randall and Dean Spunt are fooling no-one.

Which is not to say that their latest album simply carbon copies their previous successes. Rather, there’s a greater structural and melodic variety scattered across the surface of Everything In Between, widening its scope whilst still remaining unmistakably No Age – with all the shattered punk fury that implies. They open with a curveball: ‘Life Prowler’ is atypically restrained, gradually stacking up while Spunt warms up with a motivational chant, “And when I reach into/Myself my self comes true”. It’s an appropriately unusual opening for an album that proves their most varied yet – the slo-mo stomp of ‘Glitter’ struts with a glamour fitting for its title, and a pair of idyllic instrumentals, ‘Katerpillar’ and ‘Positive Amputation’, recall the glossy electronic soundscapes of Fennesz as much as they do early Trail Of Dead (the most obvious reference point for most of Nouns, which toed the same knife-edge between chaos and control).

More than it ever has before, No Age’s vision for Everything In Between evokes the varied landscape of their home country. The soft, Sonic Youth-esque chug of ‘Valley Hump Crash’ stretches out like the plains in all directions, and ‘Source’ bristles with stripped-back, urban menace. The album’s undisputed highlight ‘Depletion’, meanwhile, drags all the grit and classic rock poise of Dinosaur Jr. through a summertime haze, and in doing so manages to craft a three minute slice of absolutely perfect pop. Its chorus snags in the brain like a stray thought and refuses to budge, while the fuzzy bubblegum melodies surrounding it jack a shot of adrenaline directly into your spinal cord, sending blue jolts of electricity around the nervous system, finally left spent and serotonin drained. It’s fucking triumphant, and nigh on impossible to avoid instantly playing again, only to find it has exactly the same happily exhausting effect.

Everything In Between is undoubtedly a step onward from its predecessors – it’s more developed in every way, though admittedly lacks a little of the sheer raw bite that made Weirdo Rippers in particular so exhilarating. You get the sense throughout, though, that it’s less the result of a band consciously attempting to widen their horizons than the natural consequence of evolution and exploration. It’s certainly organic enough to have arisen subconsciously, and the considered, hypnotic power it wields is surprisingly spontaneous. It’s not very often it’s possible to drift gradually into another headspace while listening to scuzzy punk rock - that Everything In Between manages that contradictory feat is entirely to its credit.