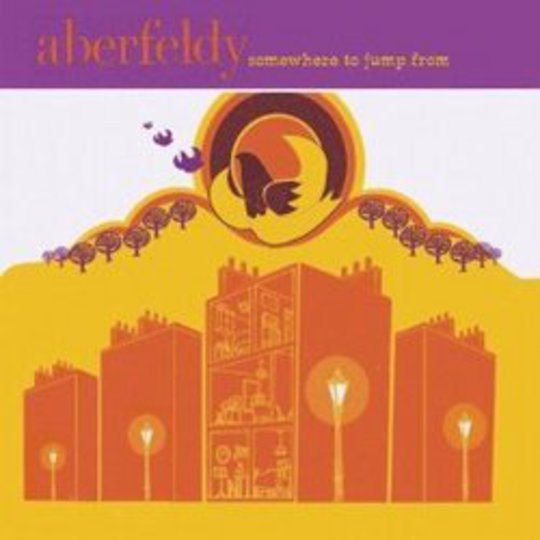 Oh, how artists must secretly yearn for the opportunity to write 'the break up album'. Yes indeed, a chance to spin a reel of beautiful metaphors, secretive insights and desperate howling towards the moon; all the time attempting to hold back the waves of barely concealed anger and frustration. You can go down the introspective road of small hours scotch-soaked sadness, or instead plump for the path of caustic, bitter bile. Either way, the world will hang on your words and listen to every vocalised creak of your heart. That is one reason you should never, ever, date a musician. One day, it may be you on the receiving end…

One oddity of Aberfeldy’s third record, conceived in the twilight of lead singer Riley Briggs recent heartache is that… well, it’s relatively chipper. True, there’s the occasional bitter sentiment and the odd whispered put-down. Yet generally, in its softly reflective and whimsical execution, it comes across as possibly the most benign break-up ever committed to tape. You can almost picture him recording it in a party hat, glass of champagne in his hand intoning 'The glass is always half full, y’know? Life goes on'.

Musically, it’s charmingly pretty. There’s a delightful concoction of musicians within Aberfeldy and each track on Somewhere to Jump From glows from the lovely sheen of brush-drum rolls, slices of burnt telecaster tone and twinkling piano and glockenspiel. And on tracks such as the slow-burning ‘Wendy’, the circling-synth soaked ‘Talk Me Round’ and the standout title track, the ingredients combine into a bitter-sweet Decemberists/Magic Numbers folk-pop delight. Unfortunately when it doesn’t blend, such as on the directionless, almost apologetic ‘Mean Ol’ Misery’ and the utterly baffling disco-soul of ‘Lisa Marie’ (Sounding like something hurriedly composed for Michael Jackson’s Bo Selecta! parody), the combination is almost teeth-gratingly twee. The equally cursed and blessed aspects of the record are most profoundly apparent on ‘If I Were a Joiner’ which is dressed in a series of beautiful melodies, colours and textures, only to be let down by cringe-worthy lyrical meanderings including the ludicrous “If I were a joiner/You know what I’d do? I’d put up a shelf/A shelf about you” and the sixth form clumsiness of “Why did you leave me? What did I do?” The truth is, to truly empathise with sadness we need to see it in all its dark, bleeding rawness. Coloured over with crepe paper, fairy lights and jocular imagery, it is hard to make any genuine emotional connection with the sentiments.

To their credit, the band does rally significantly towards the album’s conclusion, especially on the sweet final kiss-off of ‘Play the Music Loud’ and ‘California, West Lothian’. And ultimately, it’s just about enough to convince, just enough to succeed in delivering what it sets out to. There is absolutely nothing wrong with this type of music; it is honest, sweet and performed by intelligent musicians with a tuned and trained ear. Within that, it’s difficult to criticise but you can’t help feeling that a little more focus and a willing to embrace the dark side would imbue an enticing danger to their music. It reminds you of Noah and the Whale before Charlie Fink got his heart eviscerated by Laura Marling and came back bloody, bruised and armed with songs and sentiments tenfold the power of their predecessors. Maybe that’s what Aberfeldy need, though you suspect with this album being built on the back of both an inter-band break up and the separation from a record label, the chance for such reinvention may have passed them by.