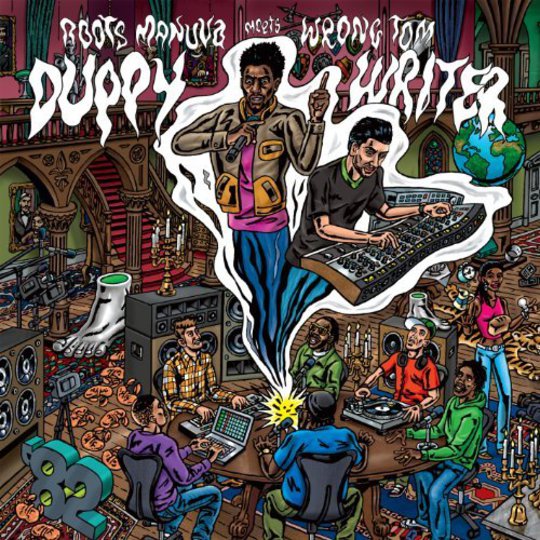 Ah, a Roots Manuva remix album: that’s brave. Wrong Tom’s gotta have some crazy big cojones: why play around with what for die-hard Roots fans is already production perfection? Or is there another, more cynical motivation? His records already feature a rather large nod in the direction of dub styles, and now that dubstep is oh-so-ubiquitous, the worry is that this is merely an exercise in opportunism, a slaughtering of the cash cow. What exactly are you trying to prove Mr.Tom?

For remixes are funny things. We’re all slightly resistant to change so it’s a hard thing to pull off. Some end up being bigger than the original, some are cringe-worthy by comparison; the best are the ones that make you reconsider. And, actually, this is where Wrong Tom excels. Even when a cruffatin classic like ‘Motion 5000’ gets the treatment and becomes ‘Motion 82’, the instinct is to go straight back to Brand New Second Hand and make sure it really is what you thought it was. It is so different, but this impostor has snuck up and almost done a better job. Almost.

And the clue is in the title. When Roots originally implored Duppy to let go his ting, let go his hand whilst he was writing, it was an indication that his lyrics come from somewhere beyond. Not necessarily from the Rastafari ghost of mischief, but whatever his source of inspiration, it has always been in his words that his strength lies, from whence Rodney summons up his power. These words have lost none of their clout and, in fact, Tom’s reworking of the sounds that surround them only serve to underscore just how powerful they can be.

It is, therefore, a very brave man who attempts to make his raps stand up to, or even stand next to, what has gone before: but the guests on this remix record manage it with aplomb. On ‘Butterfly Crab Walk’, Riddla gives a genuine added value with his slickly-delivered lyrics: “to my boys who hassle banks like Jimmy Floyd, Nat West, TSB and Lloyds, make some noise, oi, oi, oi.” Tis tight, tis true. When things get really dubby on ‘Big Tings’, Seanie T shows the deference deserved and goes "alongside a Roots Manuva" in a back and forth, his own lyrics sounding like they’d always been there. It all fits very snugly indeed.

But Wrong Tom must take the lion's share of the glory for a production that is also very fitting. Roots Manuva records have always had a sense of humour; even songs with serious subject matter - like ‘Movements’ - are delivered with a wry smile on the face. Dub is certainly a genre with scope for light-heartedness and in keeping with the original records, Tom has littered this one with sprinklings of well-timed samples which keep it all moving. Dem bounce dem along nice. And, in further pastiche of the original productions, he’s even included some skits which work wonderfully well.

It is with no small sense of relief that listener realises that, yes, Wrong Tom has pulled this off, has proven himself worthy. It’s a record that remains true to the Cause but is different enough to make even the biggest Rodney Smith head reconsider. “The choice is that there aint no choice but to pursue it…”