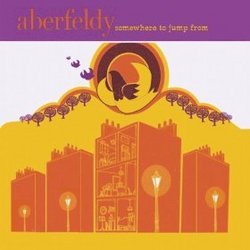 Aberfeldy - Somewhere to Jump From

One oddity of Aberfeldy’s third record, conceived in the twilight of lead singer Riley Briggs recent heartache is that… well, it’s relatively chipper. »

it's been a while since aberfeldy's last album but time hasn't blunted their edge - the 12 tracks that make up 'somewhere to jump from' are as sharp as ever, despite the somewhat depressing conditions that led to their creation. dropped by their label and bruised by the departure of both female members, it could have been curtains for the edingburgh outfit, whose debut 2004 album 'young forever' garnered universal praise upon its release and led to high profile touring support slots, an nme single of the week and the dubious pleasure of having one track ('summers gone') feature in adverts around the world for products including online bingo, diet coke and spanish nappies. from a lovelorn plea aimed at an ex partner/ keyboard player ('in denial') followed by a bittersweet reappraisal of the story so far ('play the music loud') to an account of riley's years living on a commune run by an ex member of the incredible string band ('california, west lothian') plus pure pop gems like lisa marie, this is aberfeldy's slickest work to
description from www.roughtrade.com