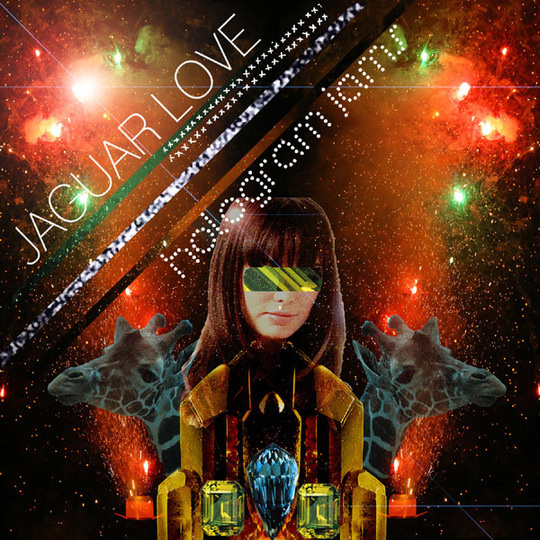 Jaguar Love were originally formed in 2007 from former members of Blood Brothers and Pretty Girls Make Graves. As of last year, Jaguar Love is composed only of former members of the Blood Brothers. The departure or addition of any person to a band will always shake things up. In this case, the departure of drummer Jay Clark means that second set Hologram Jams was recorded without live drums, and written without live drums in mind.

Far from Jaguar Love’s latest sounding more like Johnny Whitney and Cody Votolato's previous project; the revamped duo are sounding more and more disco - manufactured, but by a machine of their own design. There are some things a drum machine can do that a human can’t, but of course the inverse is also true. Programming can take you pretty far, but at times the lack of human element leaves something wanting. Machines create precision, but not passion.

So it’s damn lucky that Whitney has a voice that literally screams passion. With the ability to hit high notes that your average pop soprano wouldn’t dare reach for and a screech that could break glass (in a good way), Whitney’s vocals are the unpredictable saving grace on an album whose songs are stuck on a loop.

Repetition is heavy on ...Jams. Sometimes that repetition is catchy, and sometimes necessary to really digest the songs, but sometimes you find yourself thinking, 'okay, yes, you stayed up all night. Got it.' The guitars are in there somewhere, but not nearly as prominent as you might imagine in a band that involves one guy pushing buttons and the other guy playing guitar.

A low point is 'Cherry Soda,' which comes unfortunately early. After the first twenty or so repetitions of “sugar-coated cherry soda”, you have to wonder about the logistics of a liquid coated in anything (the repetition of this line led me to wonder if it was some sort of young person vernacular that I wasn’t understanding, but thus far my research has only shown me a nonsense lyric that probably made more sense at the time it was recorded). It grates more than a bit. But then there are revisited themes, part of the rebranding of former indie almost-supergroup into nouveau disco titans. On their first effort, Jaguar Love had the call to arms 'Jaguar Pirates', whereas this time around there is the agit-disco 'Jaguar Warriors'. Though still rife with conflict, there’s less of an 'us versus them' vibe. And pirates are passe anyway. Is it reading a little too much into the lyric, “And I don’t know what I’m gonna do/When the war is over”, to wonder if that hints at the tribulations the band have faced in their line-up and label shifts? It doesn’t really fit in with the good-time sentiments of the rest of the album.

With the recurring themes of parties and pleasant times spent, there is a careless fun throughout Jams, right down to closing with Janis Joplin’s 'Piece of My Heart'. I will admit to having a personal bias against cover songs on an LP. That being said, if ever there was anyone - man or woman - with the voice to cover Joplin, it’s Whitney. And yet, it feels rushed. The vocal strength that he displays elsewhere on the album isn’t there. There is the decided feeling of potential not being realised.