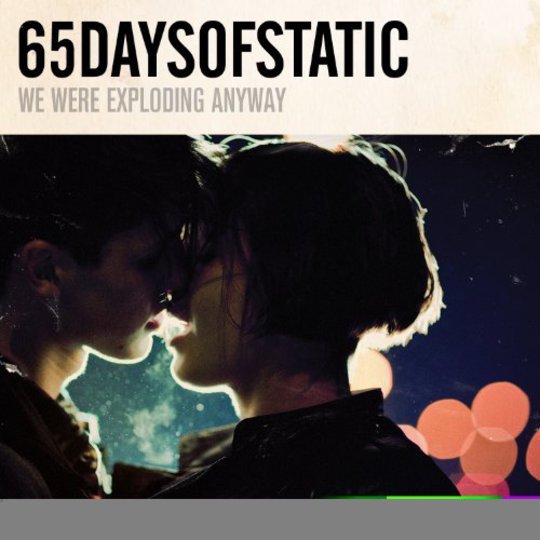 Now, here we have a conundrum. In some corners 65daysofstatic have attained almost iconic status, garnering a fair share of devotional acclaim, partnering their own devotional attitude towards that which they create. However, that status has indubitably waned of late. Maybe this was due to the unexpected tack on last album The Destruction Of Small Ideas, or the even more recent Dance Parties EP, both ravier affairs that seemed to alienate that which had so brilliantly preceded it. However, 65dos had left a chasm where once they stood so stubbornly.With We Were Exploding Anyway arises opportunity; a chance to prove the doubters in one fell swoop. And for the most part they have succeeded.

‘Mountainhead’ summons the new and, however arguably, improved 65dos to a new fork in their often glitchy electronic road. Off-kilter drum thuds team with the stab of monotonous bass noise, heralding this fresh and evermore urgent chapter to the 65dos story. Arpeggiated synthesizers interweave with glimpses of virtuoso guitar licks. It’s been a long time since they’ve managed to exercise this sort of mental activity, and long has it been missed. But be warned, it’s not all highbrow. For example, ‘Crash Tactics’ plays on 'Smack My Bitch Up'-like bass lines, crescendo-building guitars and break-like drums, leaving you hoping that this emphasis on all things electronic is beginning to help the band prosper.

All of this initial, yet quintessential, sonic conflict, however, does no justice to undoubtedly the most vibrant, arresting piece of music that 65dos have put to record since ‘Radio Protector’. ‘Dance Dance Dance’ is the sound of the past being exorcised; a powerhouse of tribal drums, emaciating stabs of crushed bass, and synths flying in like vultures to pick at the remains. And that’s just the intro – the break into the cacophony of guitar led noise is simply joyous, physically demanding a march like stomp (or rhythmic slide) along to the anthem it becomes. OK, yes, it's only one track, but its wanton bravery of sound leaves its echo to wash over the remainder of WWEA.

With that sense of urgency revived, ‘Piano Fights’, despite its gorgeous Ulrich Schnauss-esque grandiosity of sound, struggles to thaw the soul that little further. ‘Weak 04’, also, verges too close into Dance Parties-style Europop behaviour. But so swiftly forgotten by many a deserter to the band's cause (even yours truly, to an extent) is the strength in melody that won us over in the first place. Thinking back to how ‘Fix The Sky A Little’ first moved you, or how ’65 Doesn’t Understand You’ made you throw yourself around with reckless abandon, and this is what WWEA achieves when hitting its peak. An appearance from recent-tour-mate-slash-renowned-goth-chap Robert Smith on ‘Come To Me’ only furthers those feelings; this time, and for the first time (discounting the Circle Takes The Square-style squawl at the end of ‘The Conspiracy of Seeds’) the emphasis resides on the simplistic power of a vocal. Smith’s sullen, wanting cries of “All you have to do is close your eyes and come to me” adds a new dimension to the picturesque melancholy of the track.

What becomes difficult to fathom with We Were Exploding Anyway is just what 65dos’s state of mind was like in making it. There’s a constant shift in sonic aesthetic, no better example coming in the form of ‘Go Complex’. It’s opening is reminiscent of the god-awful Hadouken!, before almost randomly smashing into that signature smash of guitars and monolithic melody. Where once the balance was organic, the separation is now between dance rock party starters and cathartic, forward thinking noise. With the length of run 65dos have already taken, it’s doubtlessly the latter that will be victorious in the long run.

It’s the final two songs that seem to have the balance of power, finally, correct. ‘Debutante’’s lulling chorus permeates the air as a precipitation of guitars erode the ever-present organ based noise, beautifully easing the album into its apocalyptic climax; ‘Tiger Girl’ is a pounding, techno beat laden track ever-so-slightly cribbing Fuck Buttons' ‘Olympians’ template. Building and building and building upon the metronomic foundations of its electronic core, it finishes by segueing into passionate melody. It’s a stunning end, and a fortifiable reasoning behind why you fell in love with them in the first place.

So, it may not be the most consistent thing album you will hear all year; it may even causing the fault-lines in their fanbase to widen. But more than ever, that's irrelevant. Noisy or electronic, We Were Exploding Anyway has rekindled the old flame with its unabashed power and inexorable sonic passion.