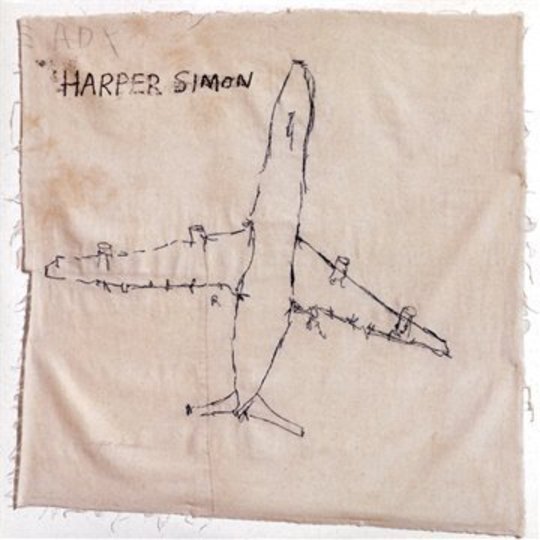 What’s really brave for a musician? Bravery is often used to describe a successful band who talk of experimentation on the follow up to their massive seller, or an artist fresh to the solo scene after breaking free of an established group setup. A man in his late 30s with a famous father making a record with a host of established session musicians would initially seem as far from ‘brave’ as you could imagine, but in actual fact it’s that word that springs to mind when listening to Harper Simon.

It’s brave because, on his eponymous debut solo album, Harper Simon opens himself up to any accusations you can throw his way. Vocally, his father Paul’s delicate tones are a reference that constantly lingers, but rather than try to disguise the obvious link, Harper invites his dad to collaborate on the hugely autobiographical ‘Tennessee’. Skipping along on a bluster of Nashville drums and pedal steel provided by a crack team of session players from the Sixties, the track finds Harper addressing his lineage for the benefit of the listener, suggesting that he is in fact a mixture of his father’s musicality and his mother’s down home Tennessee leanings.

Also, in a world where admitting that you’re a man of faith is akin to claiming to being a vegetarian at a steak house, Harper Simon directly addresses his beliefs in his album’s opener 'All To God'. A stark track that follows a defiantly hymnal melody, it’s a brave but ultimately successful way to open the record, laying bare what you might expect from the rest on offer. It almost establishes Harper as an American equivalent to Belle & Sebastian’s Stuart Murdoch or a less adventurous cousin of Sufjan Stevens, all hushed vocals, delicate string arrangements and quietly defiant declarations of faith.

Unfortunately, Harper lacks the ambition or the occasional lapses into sinfulness that marks out these other artists. His lyrics sometimes fall the wrong side of simple – just check ‘Wishes And Stars’, in which Simon declares that he’s “slow like the trees when they grow / Sluggish like the ocean when it moves,” which turns an otherwise charming track into something that resembles the results of a beginner’s creative writing class. Towards the album’s second half the musical accompaniment, which had seemed appropriately delicate earlier on, becomes a little sluggish and one-paced.

They’re not complaints that weigh down Harper Simon though, as the singer’s airy vocals keep the record afloat, bringing to mind the delicate best of Mercury Rev’s Jonathan Donahue or Neil Young’s lighter moments. And on lead-off single ‘Shooting Star’, Simon shows that he deal in something more robust, delivering a slice of dreamy alt-country that what slot easily onto a Ryan Adams or a Wilco album.

It’s these more charming moments, and Harper Simon’s direct approach with the listener, that make his debut LP worth more than a fleeting listen. It’s no groundbreaker, and you do wonder why it’s taken all of his 37 years to get round to making it, but by openly accepting his lineage, his faith and the obvious parallels that will be suggested, you certainly can’t accuse Harper Simon of lacking in bravery.