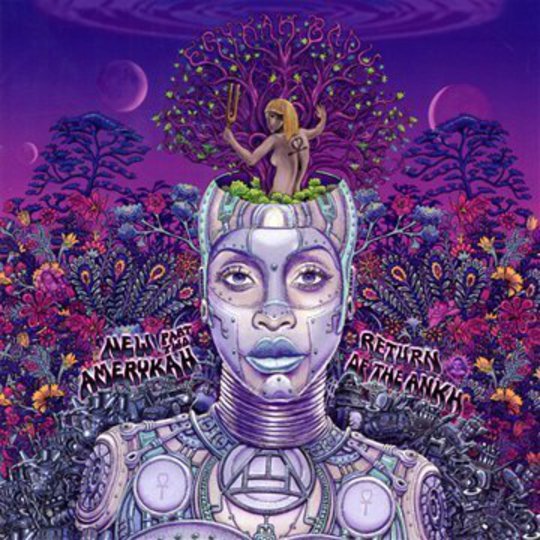 I feel no shame in opening this review with a straight comparison. If Erykah Badu stands for the cutting edge of soul and funk, just as Sly & The Family Stone did in the Seventies, then The New Amerykah Part II: Return of the Ankh is her Fresh, following hot on the heels of a record which kicked down the door and smashed in the windows all at once.

Because The New Amerykah Part I: 4th World War was a breathtaking piece of work from an artist who’d all but vanished. Coming five years after Worldwide Underground, a sprawling and confused piece of work peppered with occasional brilliance that seemed to signal the end, it was a fierce reminder of that repeated American cultural motif: to never write off an artist as having lost it, whether it be Johnny Cash or Jay-Z. It was an overdue epitaph for neo soul’s boundless optimism: just as There’s A Riot Going On was a cautionary slow sign ahead of the dark years of the Seventies, 4th World War was a bleak and absorbing assessment of the pre-Obama, mid recession American Dream being trampled underfoot. But above all it was a record so far removed from what had been expected of Badu, leaning towards the rhetorical hip-hop she so admired, laced with distorted and warped production touches; a mile away from her soulful beginnings.

Like Fresh, Return of the Ankh is something undeniably more positive than 4th World War. But make no mistake, it remains a record with something to say, as if the controversial video to lead single ‘Window Seat’ had suggested anything else.

Yet for those, like me, who were formally introduced to Badu by 4th World War, Return of the Ankh does requires a little adjustment. Where Part I was brash, angry and aggressive leaving little time for thought, Part II is subtle, calm and considered. One potential explanation could be the timing of the record, which was originally slated for release in February 2009, when Badu gave birth to her first child with rapper Jay Electronica. Certainly the title, with its reference to the Egyptian symbol of fertility, suggests that motherhood and family figure heavily in influencing this record.

Lyrically, inequality and injustice have been replaced with more classic soul themes: namely love. But this is Badu, so there’s little slush to be found here. Even when praising current squeeze (one hopes) Jay during ‘Love’, she cleverly winds in a reference to the man’s breakthrough mixtape The Pledge coyly delivering “never ever met a lover quite like you, thought I’d fell in love with superman… baby baby I’m about go insane” over a rolling J-Dilla funk n grind beat peppered with phoned-in vocal touches and charismatically outstanding yet unobtrusive percussion.

There’s a playfulness to much of her lyricism: on the afore-mentioned ‘Window Seat’, she’s “dancing on my porch like Lightnin’ Hopkins” before the mellow out of the crooned chorus: “So can I get a window seat… I just wanna take it outta town and look around”, the track itself an apparent hymn to the passive onlooker Erykah who’s replaced the rabble rousing Badu. Similarly, there’s the teasingly materialistic R’n’B pastiche of skit 'You Loving Me' (“You lovin’ me, an’ I’m driving yo’ Benz”), which ends with the woman erupting into cackled laughter. But what’s most impressive is the use of Badu’s voice as an instrument, a technique pulled from 4th World War and World Wide Underground. Her various tones are sampled, layered and even harmonised with each other to thicken the mix, her vocals turned to codas and refrains that speak musically rather than lyrically.

However, the spoken word samples and electric crunch of 4th World War have not survived the jump. The harsh, attention-grabbing production of Return of the Ankh’s forebear has been replaced with something more stripped down that resembles a traditional accompaniment, reminiscent of Baduism. Badu has stated that this record represents her reflections on ‘internal’ matters as opposed to the ‘external’ ones covered by 4th World War, so it’s little surprise that opener ‘20 ft Tall’ finds her mumbling into the middle distance, re-adjusting the focus back to her as a chair gently creaks in the background. “If I get off my knees, I might recall, I’m twenty feet tall” she gently reminds herself over midnight piano twinkling, 9th Wonder’s dusky soul production setting the tone for the album; a swooping theremin adding an otherwordly feel to a ‘back to basics’ record.

This deft touch exemplifies Return of the Ankh’s style perfectly: Badu’s production collaborations might be down-tempo and stripped down, but there’s nary a step backwards to be found: witness the shifting, chopped up funk supplied by Sa-Ra Creative Partners (who supplied much of the noise for 4th World War) on ‘Agitation’ which revolves around yet another sublime jazz piano hook. Elevator muzak this most certainly isn’t: the smooth groove of ‘Gone Baby Don’t Be Long’ is adorned with a wayward funk guitar rising and falling in the background, whilst Madlib’s chopped up radio broadcast soul samples punctuate the restless bassline of ‘Umm Hmm’. Even ‘Window Seat’ - which on first listen appears to retread classic Badu territory with a ?uestlove supplied percussion lick and sparse bass – reveals itself to be something worth revisiting, soaring harps and that theremin adding a touch of the cosmic that’s reminiscent of spaced-out jazz explorer Sun-Ra to a straightforward lick.

Return of the Ankh is, above all else, a slow burning album, and although it lacks the characteristic immediacy of its predecessor it demands revisiting by the listener. Certainly, the latter half of the record is some of the finest work Badu’s yet put out, the triptych of ‘love’ songs consisting of ‘Love’, ‘You Loving Me’ and the as-yet unmentioned low riding g-funk of ‘Fall In Love (Your Funeral)’ making up the mainstay of the album. But it’s the evolving balladry of ‘Out My Mind, Just In Time’ which sprawls itself over the course of 10 wonderful minutes that finally steals the show. A swansong in the most literal sense of the word, it blooms from familiar piano chords and one of the album’s best lyrics - “I’m a recovering, undercover lover, recovering from a love I can’t get over” - into stratospheric jazz through swooning motown and futuristic funk. It also brings the album’s single finest moment, which symbolises all that Return of the Ankh stands for in a mere second. “I’ll chop and screw for you” Badu intones, a reference that at any other time might have suggested her fulfilment of the traditional duties of a faithful companion, but for the warped slowdown of her vocals that turns it into an oblique reference to Houston’s cough syrup addled DJ Screw. It’s the simplest of tricks, but it perfectly symbolises the record’s flawless fusion of depth and wit, personality and experimentalism.

And that’s what makes Return of the Ankh an early contender for album of the year. Erykah might have mellowed out, but the lessons from last time round have been learnt, rethought and reapplied. This is a record that confidently stands alone as brilliant, yet remains an equally perfect companion to a modern classic.