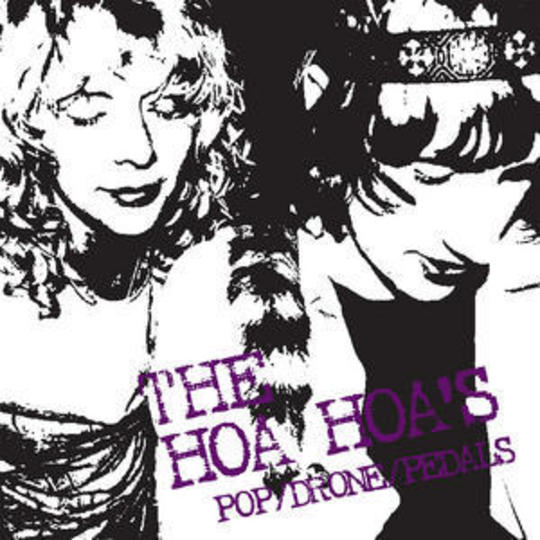 Pop is occasionally used as a statement of intent by those on the fringes of mainstream culture. Frequently avant-garde musicians will profess how they make pop music with experimental intent: The Hoa Hoa's (pronounced Wah Wah's like the pedal – geddit?) are one such band.

Pop/Drone/Pedals' opener, ‘Postcards’ is a collagist illustration of how the band arrived at their current destination. The afropop rhythms and minimal guitars mark their trail from post-punk to more ephemeral territories. In the lyrics there’s rocknroll pretension, “I should be shot” repeated as if it were more of a request than a moral judgment distinguished by the soft aesthetic and nervous tension.

‘Grew Up On The Seeds’ would suggest how the band are very much of the stoner set; that their pursuit is pure head-fuckery – to drive the listener into a mangled state with bizarre, exotic sounds, and ‘hoa-hoa’ heavy guitar solos. In reality the direction is light and rock steady with more emphasis on tempo than the inclination to ‘wig-out’. As ‘…The Seeds’ indicates there’s a nod to dub-reggae, reflected in the track’s pace.

The manipulation of tempo is oft overlooked and over-simplified by the ‘psychedelic community’ (formally known as ‘hippies’ before the re-brand circa ‘89). Classically psychedelia tracks comprise of two speeds, 'time' and 'double-time'. This unsubtle flux in tempo remembers the two comprehendible rates of coition comprehendible to a stoned Homosapien: basically a slow preamble followed by erratic (double-time) fucking. This devise, used across the board by any testosterone fuelled male guitarist susceptible to penis envy has created a superficial bubble into which musicians can aspire.

What The Hoa Hoa's provide is an emasculated antithesis to this pissing contest of a pursuit. The organs and guitars stretch-out in polymorphous loops only being accentuated by unassuming, ethereal melodies on woodwind or such like.
Wasting Time is the end of summer anthem that we now call glo-fi. It colours-in the inception point where the bliss’d-out days spent in parks or on beaches are looked back at with cool acceptance and forlorn, as if it were the only memento of a summer lost, like a stack of grainy 35mm point-and-shoot snaps of beautiful friends in wayfarers.

With layers of melodies ringing through each track, the steady drumming is rendered obsolete, merely providing the illusion that the music is neatly crafted pop hits rather than cacophonies of debilitating sound that’s associated with their earlier garage-rock infused releases. Moving into the arms of low-motion sound Pop/ Drones/ Pedals never delves deeper, constantly suspended in space, leaving an unfilled energy vacuum - the price of going against the macho grain.

The only thing left to fill the void is acute pop references, Talking Heads being the most notable example, but similar to the recently deceased Manhattan Love Suicides, these are used out of fidelity to create a new identity rather than as fashionable name-checking.

If The Hoa Hoa’s were to take the Lester Bangs ‘would I want to befriend them’ acid test they would pass, with such a laconic sound only the most uptight scenester would reject their company. Long summers spent on road trips and late nights listening to weird sounds would presumably be on the menu. However, if you’d happen to spend a year or two of your life wasting away in their sedate company, don’t say you haven’t been warned.