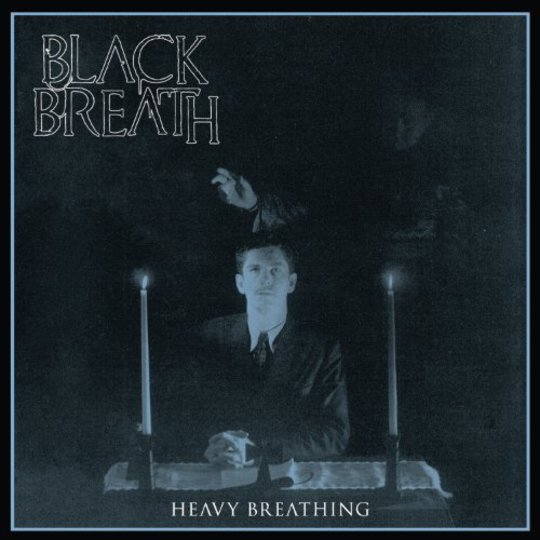 A lot of people are serious about metal. A lot. This fact doesn’t register as often as it should - nevertheless it is a fact. It’s not possible to take metal ‘kinda seriously’. Much like the music, it’s all or nothing. Black Breath are all metal, and the sound shows just how serious they are - the faster, the harder, the better etc. However this seriousness hasn’t deluded the Seattle group into making records grave beyond boring.

Black Breath know when a track is finished, from the point of conception through the period of execution. There’s no inclusion of alien time signatures nor awkward ‘math-rock moments’. Heavy Breathing is straight up and full on. It never tries to double guess or displace the listener. It thrives in natural, organic sound.

The energy floats majestically throughout the record. Dancing between ideas the sound is so laconic that it gives the impression that little or no effort has gone into its construction.

Album highlight ‘Escape From Death’ points to the band’s focus on mortality and highlights their talent for hyper-conscious referencing. The band’s name reminds us of Michigan grindcore pioneers Repulsion but more importantly, of Tolkien’s Nazgûl. With so many early groups openly referencing Tolkien, one is forced to picture first generation metallers frantically thumbing through the writer’s tomes looking for potential plagiarisms.

Black Breath are tying to preserve the rotting corpse of music, to capture the essence, they are trying to guide the listener to fairer pastures. Like those who took inspiration from the Colour Atlas of Forensic Pathology by Jay Dix, Black Breath have created a formulae to preserve a decomposing body in order to present it as an – albeit musical - work.

Opening with a fluid trembling riff the track breaks into a flurry of aggressive drumming. Rather than offering the key to eternal youth, as the name ‘Escape From Death’ might suggest, notions of suicide and self-mutilation are brought to the fore. Once the duty is done, the corporeal act has been committed; the guitars blast a municipal force. Their (initially) disjunctive textures in the final section, announcing the believed freedom of the afterlife. As if they have achieved in trying to capture The Physical Impossibility of Death in the Mind of Someone Living.

Heavy Breathing, in its clean completion, could be seen as an affront to the complication and hyper-construction of modern metal, where one-upmanship is found in the portrayal of intelligence. Instead, the record is a return to core – crude – values. Unfortunately, it’s hard to consider Heavy Breathing ever leaving the bedrooms of the converted. For all its achievements, the sound is self-limiting to its pre-existing fan-base and a Mastodon-like crossover seems unlikely. Final track, ‘Wewhocannotbenamed’ is so absorbing yet personal, it is difficult to conceive of the it as a uniting cry for the marginalised and disenfranchised. It is not until the re-emergence of the main riff in the album’s dying moments that we hear Black Breath collecting mementoes from the debris of their destructive sound. In this brief regressive glance, Black Breath show how they’re waiting for nobody.

It’s famously hard to know when a work is finished or not. Many artists argue it’s when the process of creation is severed from the object itself. The ease of each track on Heavy Breathing lends the impression that each one is autonomous. Black Breath may look towards the black robed Nazgûl, however their songs recall the white robed Fates, in that everything sounds predetermined.