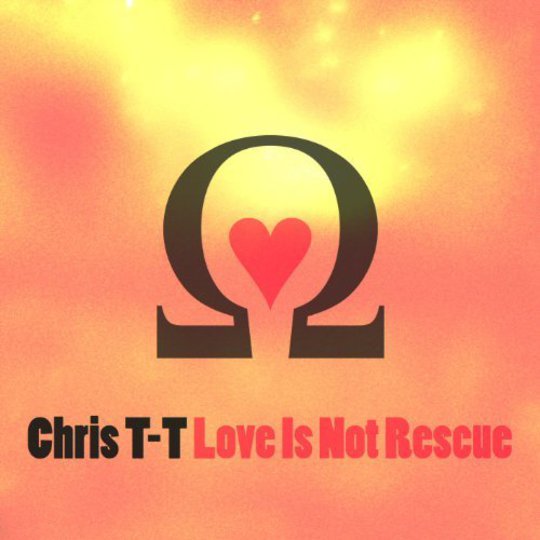 Without wishing to dwell upon it, Chris T-T (Christopher Thorpe-Tracey to his folks) has a little bit of history with Drowned In Sound. This being the first review of a Chris T-T record since that war of words it is with the interests of critical impartiality and the well-being my own posterior in mind that I pay no regard to that spat from way back in '08. Yep, there will be no derogatory mentioning of Mr T-T and Scouting For Girls in the same sentence here...except for that one of course. Joking aside Chris T-T has an intriguing, if not entirely successful, discography behind him from novelty racket of 'Eminem Is Gay' to his rather more highbrow London trilogy (The 253, London Is Sinking and Capital) and the overtly political 9 Red Songs. As its title suggests Love Is Not Rescue is 'the personal album'. So what does a 'personal' album by a man whose opinions, by his own admission, so often result 'in someone being offended, outraged or otherwise aghast' sound like?

Well, surprisingly inoffensive actually; there are no ex-trashing voyeuristic vignettes or anything of the sort. In fact Chris T-T comes off as every bit the wholesome fella in the self-effacing remorse exhibited on 'Stop Listening' ("Only once in my life I ran away before morning and I still live with a beat of shame from that night/ I couldn't bear to see her sober disappoint grow and grow right in front of the people I called friends at the time"). If there's any one attribute which characterises Love Is Not Rescue as a 'personal' album then it is the degree of tenderness on display from the typically irascible songwriter. See penultimate track 'Tall Woman'; despite ostensibly being a portrait of its titular character you can't help but feel that the empathy evident in T-T's tremulous vocal performance and the pensive piano melody reveals more about the author than the protagonist. It is also one of his most accomplished recordings to date, the melody and production values recall the intimate nocturnes of the Smashing Pumpkins' Adore, but with a theatrical flair worthy of Colin Meloy (of whom vocally T-T sometimes sound like an English version).

Opening track (and lead single) 'Nintendo' is similarly piano-based, but is embellished with glockenspiel and punctuated by snare hits and crashing cymbals which leave it sounding like the soundtrack to the slow-motion moment of glory in a sporting biopic. It's undeniably rousing in execution and makes for an odd, yet intriguing, vehicle for a defeatist chorus where Thorpe-Tracey implores "Write it down to feel empty." Unfortunately as the song reaches its musical climax it hits you over the head with the lyrical clunker of "Find a job, buy a Nintendo." An otherwise ok song is ruined by the cringe-inducing hook line and unfortunately it is a recurring problem, with the album's highpoints invariably mitigated by lyrical shortcomings.

Taken at face value the aforementioned 'Stop Listening' has an infectious sing-along chorus, but the verse where T-T uses football metaphors only to then inform us "Now I'm using football metaphors, I fucking hate football metaphors" is just self-indulgent and irritating. 'Elephant In the Room' treads a similar path to 'Stop Listening', with the transformation from the dourly strummed verse to the casually anthemic chorus further proof of T-T's aptitude for tunesmithery. Unfortunately as he rails against modern conveniences it's time to wince; "I forgot how to cook my dinner, bought it in a packet and it tasted of boiled boredom." is perhaps the worst offender, although "Before the word freedom replaced just being free, a sleight of hand to steal our democracy gives it a run for its money.

In some respects Love Is Not Rescue is most successful when T-T is at his most experimental and exploring those more personal themes of love and relationships. The title-track combines this with some musical experimentation starting off as it does with a chorus of discordant squeezeboxes before settling on an hymnal drone during which we find T-T as his most poetic ("When I reflect my life into a minor key I think of you, it freezes me somewhere within). Perhaps the difference is that T-T sounds inspired himself, despite the song's heartbroken sentiments and the music conveys enough in itself that the lyrics can be ignored, whereas on less musically notable tracks the lyrical faults are all the more glaring.
Ultimately (and ironically) Chris T-T sums up the problems articulately himself on the closing track. Musically it is typical of much of the album, a catchy briskly strummed acoustic number with an arresting key change in the chorus and some tokenistic brass. Its title: 'Words Fail Me'.

You certainly couldn't accuse him of not being self-aware at least.