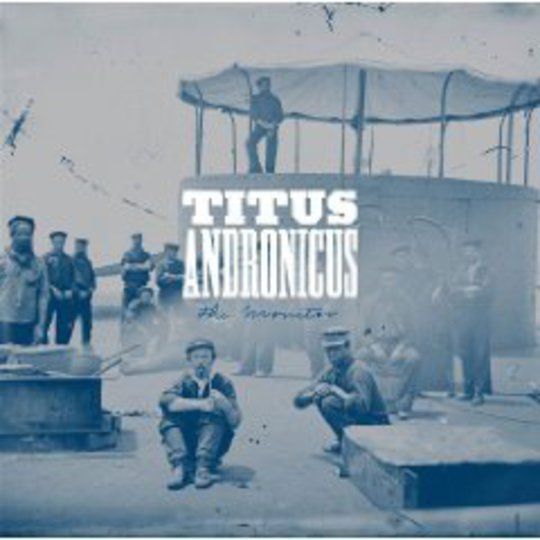 Fascinating, overblown, downright baffling… sometimes concept albums are all these things, and sometimes, they are not. It is rare, though, they’re such terrific fun as the second set from Titus Andronicus, which squares up against colossal odds (societal reverberations of conflicts long passed; song length averaging six minutes; spoken-word interludes) and overcomes them with ease. I’d go as far as to label the quintet nonchalant, were it not for the negativity that word implies; from the opening notes of their blistering debut album The Airing of Grievances through the dying strains of The Monitor’s final track, it is clear that being in a band is the most important thing in the world for Titus Andronicus, everything they touch ablaze with righteous indignation.

And so. A concept album about the American Civil War? Interspersed with quotations from historical figures ranging from Abraham Lincoln to Walt Whitman, The Monitor takes this conflict and uses it as a jumping-off point to explore our modern discontent. Singer Patrick Stickles is careful to point out that it is only ‘sort of’ a concept piece, and one that doesn’t take place in ‘in olden times’ – a point borne out in songs like ‘Theme from ‘Cheers’’, a college-years-inspired ode to excess that could feasibly be set at any point in the last 150 years.

Members of Ponytail, Vivian Girls and even Craig Finn of The Hold Steady pop up over the album’s 65 minutes (Stickles also duets with Jenn Wassner of Wye Oak on ‘To Old Friends and New’, a touching change of pace), but this remains resolutely Titus Andronicus’s show – fizzing with anger and melody that exceeds anything found on …Grievances. Such are the levels of brio on display they can ostensibly stitch two songs together and get away with it (as in ‘Four Score and Seven’), throw in unlikely saxophone solos seemingly on a whim (‘…And Ever’) and close out the album with a song that weighs in at a cool 15 minutes. Named after a naval battle.

Many have pointed out the similarities between Stickles’ tremulous snarl and that of Conor Oberst’s, often leading them to describe the band a rockier, shoutier Bright Eyes – a relatively accurate, if reductive interpretation. A better comparison would be with Oberst and Denver Dalley’s short-lived Desaparecidos outfit, who also took issue with problems seemingly endemic in Western society, albeit from a present-day perspective. The Monitor’s raw, unfettered disposition casts it a rough thematic cousin to that band’s Read Music, Speak Spanish, or perhaps The Thermals’ The Body, The Blood, The Machine – similarly bounteous of hook and antagonistic in outlook.

If it sounds like Titus Andronicus are slightly over-reaching with all this, bear in mind where they derive their moniker; their propensity for song titles like ‘Upon Viewing Brueghel’s ‘Landscape with the Fall of Icarus’’; their shout-outs to Albert Camus, Cormac McCarthy and the like. But as with Stickles’ thoroughly enjoyable band blog, the group never takes itself too seriously – even amid ceaseless allusions to literature, pop culture and, well, historical-events-of-profound-importance, a skewed sense of humour renders even The Monitor’s most anguished moments palatable.

What of this anguish, though? On ‘The Battle of Hampton Roads’ Stickles reels off a desperate litany of self-flagellation before begging that his other half never leave him, all over a marching band rhythm replete with everything from bagpipes to brass to strings to the band’s trademark scuzzy guitars. Winding its way to close, the song accelerates into an interpolation of old American folk music their forefathers would be proud of. ‘No Future Part Three: Escape from No Future’ finds him spit “You will always be a loser” to himself, yet when his bandmates join him to bellow the lyric as if their lives depended on it the effect is oddly cathartic, and defiantly jubilant in tone.

On ‘Four Score and Seven’ the band repeat this trick to even greater ends. When Stickles hollers “It’s still us against them!” like some furious mantra, he could be singing about anything: ideologically opposed sides of a confused and drawn-out war, or simply those that consider screaming along to passionately felt indie-rock music in dingy basement venues to be among the most important things in the world, and those that don’t.

The Monitor, then, is a boisterous, eloquent argument that rock music need not be dumb in order to be enjoyable, moreover, that we should be questioning and analysing our heritage rather than precariously stumbling onwards. But mostly, it’s just a stupendous collection of songs; one that demands to be listened to as loudly as you can possibly get away with.