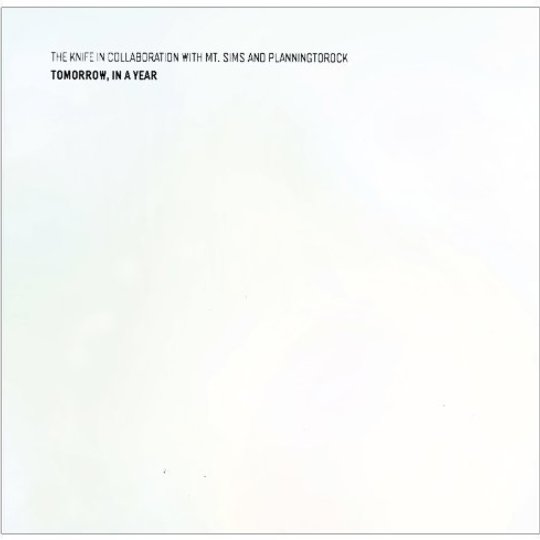 A couple of hundred years ago, it was considered the height of sophistication in poetry circles to find an oppressive patch of wilderness (preferable European and cold), plonk yourself down, and contemplate until you were walloped in the face by the recognition of your own insignificance. Sure, the Romantic poets were an odd bunch, but any time you really, seriously think about it, you’ve got to concede that nature is pretty fucking mindblowing. Which is probably why we do our best to avoid thinking about it. Pondering a fjord until your head hurts is, at the end of the day, less fun than season three of Mad Men.

Tomorrow, In A Year, a double album produced by a loose conglomerate of musicians headed by The Knife, isn’t what you’d call a fun record. Listen to the songs in isolation or out of sequence and your reaction is liable to be one of bafflement: may I modestly draw your attention to ‘Intro’ (some quiet clicking noises) and ‘Variation of Birds’ (which commences with an atonal two minute scream of feedback). But as a continuous hour and half movement that mercilessly evokes the sheer, fuckoff, awful, inhuman immensity of the natural world, it bloody well works. Whatever sensation the Romantic poets were chasing is surely here, in these organic bursts of electronic sound, swarming with the rhythms of birds’ dry wings and insects’ weird chitterings.

Moving back a bit, Tomorrow, in a Year has been referred to as The Knife’s opera about Charles Darwin. This is misleading for two reasons. Firstly, it’s not a Knife record. It’s The Knife in collaboration with (excellent outsider electronic artists) planningtorock and Mt Sims, featuring a further three vocalists - Lærke Winther, Jonathan Johansson and mezzo-soprano Kristina Wahlin. Regardless, it doesn’t sound like The Knife’s mordant electro pop, being an atonal construct of glitches, drones and erratic rhythms, without the glimmer of a hook until the final ‘The Height of Summer’.

Secondly, even if you're going to allow the opera tag, it's not really about Charles Darwin. It was written in complete isolation to the Hotel Pro Forma production it soundtracks, and though it evokes the sweep of evolution (using Darwin as source material) it does so without characters, plot, dialogue or other such convention.

It begins in darkness. ‘Intro’ is a quiescent pool of miniscule sound droplets that gradually condense into a harder scrabble, suggestive of some amoebic ooze securing purchase on the land. As I said, Tomorrow, in a Year has no plot, but clearly ‘Intro’ is suggestive of life’s dawning, tiny movements in an inky sea of nothing. The names of the next four songs – ‘Epochs’, ‘Geology’, ‘Upheaved’, ‘Minerals’ – are clearly indicative of the passage of prehistoric time, with the libretto confirming this to a degree - “Embedded years, accumulating so tranquilly here” keens Momme on ‘Epochs’. But this movement seems clear from the music alone, as titanic drones stutter and roar into action, the generators of ecology tentatively powering up, testing out new patterns. And these patterns are never suggestive of mankind, being arrhythmic and defined by silence as much as noise, little themes testing the air and either fading away or growing in power and complexity.

It might seem perverse to use machines to conjure the Earth's first biological fumblings, but actually it makes sense, the music’s complete lack of warmth distancing Tomorrow, in a Year from any sense of humanity (Wahlin sounds alien and near incomprehensible). Much of the sound is generated by computer programmes, which may have been written by humans, but were modelled on animal calls and studies, rhythms a human musician couldn’t play and wouldn’t think of, rhythms from outside humanity, rhythms that exist in spite of us.

That, in a nutshell, is the appeal and triumph of Tomorrow, in a Year, a coldly overwhelming record built on algorithms Olof Dreijer spent two years tinkering with, modelled on both field recordings made on a trip to the Amazon, and Darwin’s own scientific data. Save for a few sparks at the end, Tomorrow, in a Year doesn’t romanticize or even demonstrate affection for its subject, and nor should it. It is simply a dispassionate electrical negative of a portion of nature's pitiless immensity, sculpted and tweaked for atmosphere by musicians who are masters of such things.

There’s no room to really dwell on its geologic layers of sound and movement here. Needless to say the record evolves (duh), becoming more certain of itself, gutwrenching percussion gradually entering the fray along with hard, purposeful beats that eventually hit techno velocity. By the time we’ve arrived at the luminous ‘Colouring of Pigeons’ there is out and out beauty, Wahlin spinning a melismic veil of sound, a wordless landscape to match the wonder in Karin Dreijer Andersson’s sole vocal turn. We’re finally in the human era, and with Andersson’s interjection the record becomes a little more human to match, a drop of warmth that makes Tomorrow, in a Year more than simply impressively gruelling, rewarding after overawing. Indeed ‘The Height of Summer’ is a positively final, balmy kiss off: “how is Charles? I haven’t heard from him for a long, long time” sighs a female vocalist, the ‘Heartbeats’-style synth bounce and glossy chiming suggesting a future when Darwin himself is but a half remembered dream.

So yeah, Tomorrow, In A Year is basically a concept album about evolution. On paper, that sounds alarming. But the thing about all those Seventies prog rock concept records is that they rarely transcended the musicians involved, and this is why they’re often a bit silly (even when they're not then what, for instance, do the guitar solos on 'Comfortably Numb' actually have to do with The Wall's overriding concept?). Dreijer and collaborators have not a shred of ego: in Tomorrow, In A Year it’s not clear who plays what, who wrote what, or who sings what; that not the point at all. The focus is all in forcing just a tiny a glimpse of the endless vastness of life outside of our species. Plonk yourself down, and wait for it to wallop you.