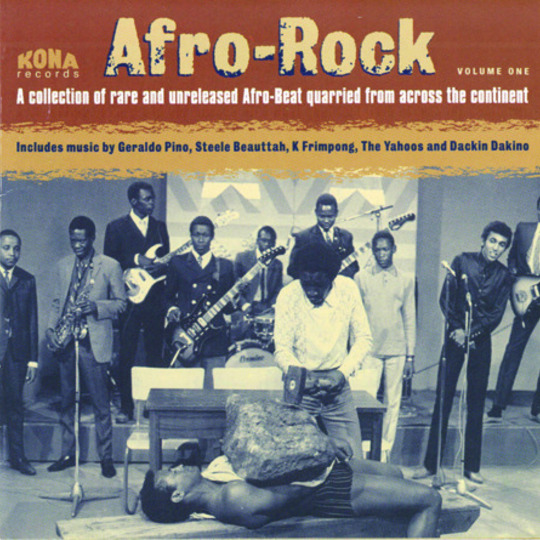 Duncan Brooker is to soul and funk what Alan Lomax is to folk music, or Andy Votel is continental psychedelic obscurities: an indefatigable crate digger, enthusiast and ethnomusicologist of the highest caliber. It was during a work trip to Kenya that a very young Booker would spend his down time searching through the markets of Zaire, Malawi, Mozambique and further afield on a quest for African funk. Brooker had been inspired by what he’d heard of Nigerian musician Fela Kuti and his instincts told him that there must be more. He was right.

Brooker’s dedication to the cause and compiling of material is the stuff of musical legend, as profound a spiritual journey as listening to the music itself. Inextricably bound as these elements are, let us focus upon the wonderful sounds on offer here via this long awaited re-issue of Afro Rock Volume 1. As American free-jazz, soul and funk of the late Sixties dealt with aesthetic and ideological notions of freedom, so too did the type of music that became known as Afro rock, as African countries entered an era of post-colonial emancipation. African-American funk tropes abound but they’re infused with a whole new palette of polyrhythms and harmonies which lends Afro-funk its distinctive edge.

You can hear why Garaldo Pino and his Heatbeats were an influence on a fledging Fela Kuti, their 'Heavy Heavy Heavy' being an ecstatic mediation on funk propelled by syncopated guitar and percussion. Steel Beauttah’s 'Africa' swaggers along with poise like a coke-free Sly Stone, all righteous lyricism and flute riffs. Ghanaians Mercury Dance Band utilise a ska-flavoured horn section very much in keeping with their West African origins, while Orchestra Lissanga’s 'Okuzua' is lush and tough rock steady. So infectious is its head nodding groove you’ll be stricken with RSI not long after hearing it. In fact, that’s a compliment that could be leveled at a fair few tracks here. Super Mambo 69’s 'Sweeper Soul' wears its James Brown/On The One influences upon its sleeves – impassioned, sweat laced "suck it to me"s included – and is all the better for the reverb-lashed, chrome-plated guitar lines that negotiate the song with quicksilver dexterity.

There’s no shortage of musical surprises on offer here: Bokoor Band’s judicious use of harmonica sits delightfully atop the shuffle of 'Unokpa Shawarpo'. Wade through the album’s sweet quagmire of funk and psychedelic soul eventually rears its pleasingly mutated features in the form of tracks like Yahoos’ 'Mabala' and a bonus cut by Jingo. The former is playful and perverse with a delayed female vocal intoning "It’s me, Diana… Diana" as a Maceo Park style saxophone free-styles amidst oscillating Korgs. The latter nugget, so rare it remains untitled, also employs sci-fi analogue synths to add a modernist sheen over the undeniable rhythmic sway of this genuine find, reminiscent of the type of lush consciousness funk Aaron Neville was cutting in New Orleans.

Afro Rock Volume 1 remains as fresh and worthy an addition to your funk library as it did when it was first re-issued at the turn of the previous decade. The emotional depth and stylistic range of this joyous and important music is enough to make you wonder how on earth it could be ignored for so long. Truly, Brooker’s pain was the world’s gain.