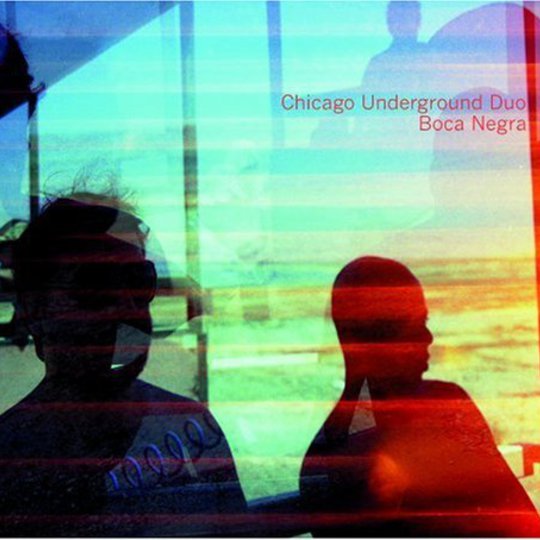 Boca Negra is a slang term in Spanish, used to denote someone who is foul-mouthed or abusive. It’s also a type of cake. Somewhere in between the sour and the sweet lies this album from Thrill Jockey mainstays Chicago Underground Duo. Cornetist Rob Mazurek and drummer Chad Taylor have been around the block a few times, collaborating with the cream of the crop of Chicago musicians. But for this, their fifth album for Thrill Jockey in 12 years, they traveled to São Paolo, Brazil, where they cut an album that combines their love of scattered improv work and tightly confined grooves.

Opener ‘Green Ants’ expertly skirts around discordance and design, beginning in a flurry of dueling drums and ripples of watery cornet playing from Mazurek. Orderliness emerges halfway through, via a galloping beat tied to Mariachi-style blowing, before the track descends into clacking rim-shots and zigzagging jabs of bilious noise. It’s an attention grabbing way to open the album, as Mazurek and Taylor forcibly pull their listeners through the myriad stylistic nooks and crannies they inhabit, with little desire to ease in anyone unacquainted with their heterogeneous approach.

As an introduction, ‘Green Ants’ is a perfect sampler of Chicago Underground Duo’s art. It’s almost as if they view the album format as a challenge to test out the durability of genres, to see if they can bend the worlds of jazz and ambient and electronic music to breaking point. It’s a dizzying ride — the vaporous trail left behind by the Morricone-goes-jazz noodling of ‘Left Hand of Darkness’ is smacked up sharp by the following cover of Ornette Coleman’s ‘Broken Shadows’, which pairs lilting vibraphone with Taylor’s manically combustible drum patterns.

Listening to this music can feel intrusive, like walking in on two players who are so immersed in what they’re doing that they seem to have entirely forgotten about the world outside. At other times - when ‘Confliction’ hits its straightforward Dave Brubeck gallop for example - it’s a joyous thing to behold, reminiscent of Red Snapper’s merging of dance beats and horn blowing circa the standout Prince Blimey. That Mazurek and Taylor refuse to entertain the notion of a singular aesthetic can be disorienting at first, but ultimately opens up dense and rewarding layers of exploration as Boca Negra unfolds.

The second half of the record is markedly different to the first. Beginning with the ring-shaped loops of ‘Hermeto’, which doesn’t sound a million miles away from the oblique shift Tortoise took on TNT, the album settles into a set of songs that bear palpable structure, almost as though the blurred patterns of the first half of the album have suddenly been pulled into tight focus. So ‘Laughing with the Sun’ is prodded into shape by great belches of treated noise, and even the debris pile of discordance that underpins ‘Roots and Shooting Stars’ is held together by a metronomic pulse that gulps up for air throughout.

Crucially, despite their desire to meddle, Mazurek and Taylor always inject a heady dose of feeling and emotion into their music. ‘Vergence’ is so delicate and pretty that it’s one heartbeat away from being put on a life support machine, and they skirt close to the desolate beauty of Jerry Goldsmith’s incidental music from the soundtrack to Planet of the Apes on ‘Quantum Eye’. Boca Negra isn’t an album that’s easy to get acquainted with — this is music designed to induce a fundamental paradigm shift in our expectations of what a band can be and how they should operate, with two accomplished players bringing agitation and affection together at an uneasy meeting point.