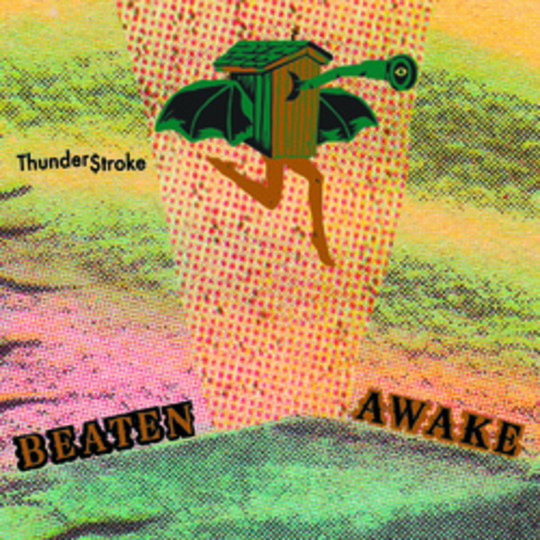 It’s difficult to avoid cringing when a record opens with a wail of “Can you dig it?!” that would cause Sebastian Bach to nod with approval. This, alongside Beaten Awake’s decision to spell their new album’s title with a dollar sign, suggests a brash cock-rock pomposity that the four indier-than-thou Ohioans could never come close to pulling off. But once ‘Suite Cheetah’ stomps out of the slushy embers of ‘Mr Thompson (Can You Dig It?)’, all of this is forgiven. By the time ‘I Shot The Mayor, Not The Deputy Mayor’ brings Thunder$troke to a buzzing, delicately euphoric close, all sins are forgotten.

The aforementioned ‘Suite Cheetah’ is an early highlight. The melodious call and response between guitar and vocals lets both parts wash over you, without the track feeling overcrowded. “I eased up to eavesdrop/to drunk hear your drunk talk” is sung with convincing regret, and throughout, the dynamics keep their cool and create a distinctively measured emotional resonance.

Twenty minutes later, and ‘Mr Thompson’ does just the opposite, making an impact with its sheer lack of composure. Beginning – as much of Thunder$troke does – with plodding drums and fuzzy guitar twangs reminiscent of early Frightened Rabbit, the calm atmosphere is enchanting. But soon the layers of vocals are swirling, colliding with one another, chords are being inflicted amid a lyrical stream of consciousness, until we are brought, with soothing effervescence, back to where we began.

This is where Beaten Awake not only succeed, but really excel. ‘Gyro Quake’ is sustained for its first 35 seconds by a single note, until the song takes off, accompanied by a single guitar. But drums quickly replace the guitar – has it given up already? No: within a few bars the musicians merge, and propel the track, pulsating towards a chorus that hums with distorted grace. What Beaten Awake accomplish are songs with a textural richness that belies their structural simplicity. At times new sections seem to emerge somewhat arbitrarily, even randomly, but the way ideas are segued into one another – with synths and effects to add cohesiveness – is thoughtful, and never loses warmth.

As this warmth pervades throughout Thunder$troke, the atmosphere the album creates is neatly defined. It is expansive, but not overblown, as the performers are saturated in reverb, making comparisons to The Secret Machines inevitable. But without the stoner-rock core, Beaten Awake use the space in which they find themselves to be a little more playful. ‘Thunder$troke’ is a case in point – with a nice, big, squelchy bassline and a tongue-ever-so-slightly-in-cheek twee chord pattern, it has the sweetness of Camera Obscura, but with less soppiness and more strut.

‘Coming Home’ is a more poorly articulated attempt at joviality. The dreamy keyboard plonks with whimsy, but with lyrics that are full of sorrow and loss, the composition is awkward. Though it reaches a passionate climax, the song is all too drab, and a little too daft. ‘Halo V’ is a similar drag, so bloated with hollow grief that it slows the whole album down, sapping the energy from within it.

So, going back to the start for an overview, and there is a lot to 'dig' about Thunder$troke. It’s full of charming hooks, elegant harmonies and punchy rhythms. The big problems are production problems, with the drums in particular, constantly too high in the mix. Similarly, Beaten Awake’s musical dexterity has a tendency to get lost in the wash of their sound, which can detract from the precision of their songs – though fortunately this is more often a cause for praise than for criticism. For these reasons, Thunder$troke is by no means a perfect album, but it is an album with moments of fantastic ingenuity, and many tracks worthy of repeat plays.