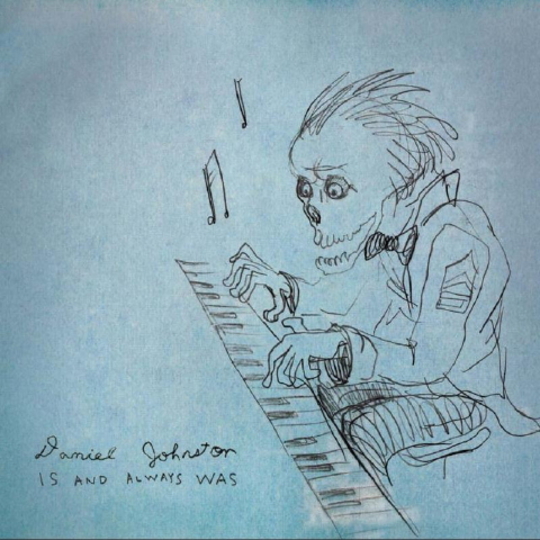 Writing about Daniel Johnston tends to fall into two categories, especially since the 2005 release of Jeff Feuerzeig’s outstanding documentary, The Devil and Daniel Johnston. First, there’s the 'it’s great to see him doing so well' camp, who undoubtedly mean well, but can’t help coming off as slightly patronising in their approach to his actual work. Then there’s the 'it’s not as good as it used to be' camp, who miss the tape hiss and red-raw production values of Daniel’s earliest recordings, ignoring the fact that he always had Beatles-sized ambition burning brightly in his eyes. That’s not to demean those early recordings — they are every bit as stunning, moving and emotionally redolent as the reams of text written about him suggest — but it would be churlish to expect Daniel to return there, especially as the elevation in his profile has given him another crack at delivering the songs as he always imagined them in his head.

Fortunately, someone had the foresight to employ producer Jason Falkner (Paul McCartney/Beck) for Is and Always Was. Falkner manages to set up a sort of production halfway house, which raises everything out of the bedroom, but still burrows deep to the tender core at the heart of Daniel’s songs. The opening ‘Mind Movies’ is an actual, physical representation of the shift in standards. It begins with Daniel thrumming away at an acoustic guitar and singing about someone, surely himself, who makes “a lot of movies in your mind”. A warm and spacious organ is added a third of the way through, then drum rolls and a full band kick in before we head back to the stripped down beginning. It’s a neat way of ushering nervous longstanding listeners into this brave new world, whose natural reflex may have been to scurry back to a weatherworn Yip/Jump Music cassette if the country-fied slide guitar rock of ‘Freedom’ had been the opener.

After being eased in, Is and Always Was is delivered with the backing of a full-blown band, who vacillate between the straightforward stomp of ‘Fake Records of Rock and Roll’ and the echoey vocaled Lennon-isms and compressed Tim Gane guitar of ‘Lost in My Infinite Memory’. The title track even sounds like it could have been an offcut from the acidic, freaked-out rock of the Flaming Lips’ excellent early career highlight, Telepathic Surgery. There are moments of humour too. Few people could pull off ‘Queenie the Doggie’, especially with the perpetual dog barks that prop up the song, but Daniel manages it by making it part ode, part delve into some strange, hard-to-identify issue he had with Queenie’s death (“if only the money could save her now,” he repeatedly, mysteriously, sings).

Crucially, the musical backing just sits in the songs unobtrusively, providing a simple bolster for Daniel to do what he does best. There’s no great push for innovation, or a misguided attempt to do something way-out there. So when Moog-y bloops are added to ‘Without You’, which momentarily sounds like it’s going to be a cover of Fleetwood Mac’s ‘Don’t Stop’ during the piano intro, they serve as a perfect foil to Daniel’s jaunty I’m-over-you exhortations. Except, as seasoned Daniel watchers understand, he really isn’t 'over' her, and probably never will be — “I want you to be my wife,” he cries on ‘High Horse’, singing to the permanently out of reach object of his affections, and then returning to her again (although, unlike previous records, never by name here) on the delicate sea shanty, ‘Tears’.

The subtly different strains of Is and Always Was are pulled together in the six-and-a-half-minute closer, ‘Light of Day’. It’s testament to his abilities as a storyteller that he can suck you in using simple alliteration (”car/far”, ”face/place”) without ever seeming rote, but that’s also due to the fractured emotion he floods each word with as he draws you in closer. ‘Light of Day’ is Daniel chasing an unobtainable dream of love again, and addressing it with that disarming and uninhibited directness he has, that few songwriters have the balls, or the talent, or the unselfconscious mindset to attempt. And when he hits that utterly convincing ”I was so in love with you” line, which may or may not be about someone real or tangible, he shows how our fantasies about love, and our impossibly grandiose ideas about how they should manifest themselves in the real world, can be every bit as powerful and overwhelming and downright scary as the real thing.