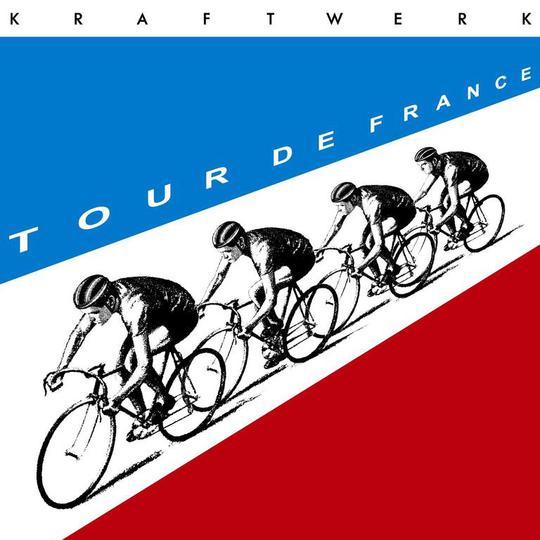 Following the Computer World tour, the largest and longest that Kraftwerk had ever embarked on, the band discussed the matter of exercise. Having noticed how close associate Emil Schult seemed to have the most energy out of all of them, they adopted two habits he had recently taken up: vegetarianism and cycling.

Along with music, cycling can be seen as the second great love of Ralf Hütter’s life. The band’s leader and now, following Florian Schneider’s departure in 2008, sole remaining original member, it’s said by some that the intensity of his love for and addiction to cycling is at least in part the reason for the massive slowdown in Kraftwerk’s output post-1981. Hütter took to cycling every day, encouraged the rest of the group to start doing the same and enrolled them with a Düsseldorf cycle club where they adopted the nickname ‘Radsportgruppe Schneider’ (‘The Schneider Cyclist Club’) and wore a uniform of black pro-cycling wear. Allegedly they chose the colour of their outfits to match the night, when is when they worked in the studio, and the coffee they drank vast quantities of while talking about music.

Hütter had always been the sports-lover of the group, attending football matches and playing golf. Given the stress he places in interviews on Kraftwerk being interested primarily in daily life, it seemed natural that sport would at some point prove an attractive theme to write about, although other members of the band were less convinced of its conceptual suitability. Tempting as it may be to daydream about a golf-themed Kraftwerk album, though, cycling at once seems a natural fit; as Hütter remarked to Pascal Bussy in 1991: “It is the man machine.”

Originally intended to be a track on Kraftwerk’s ill-starred Techno Pop LP, 'Tour de France' was released as a single in June 1983. As things turned out it would be another 20 years before it featured on an album, Tour de France Soundtracks, the title of which has now been shrunk to Tour de France. A sleek, oiled rush of sound, Tour de France is the first Kraftwerk album since 1981’s Computer World in which music and lyrics work in tandem as part of a defined, unified construct.

Reaping the benefits of this focus, the opening quartet of ‘Tour de France Étape 1’, ‘...Étape 2’, ‘...Étape 3’ and ‘Chrono’, rank as a junior partner to the epic journeys of ‘Autobahn’ and ‘Trans-Europe Express’. A liquid techno pulse that surges forth and recedes like a peloton, this suite's central spine is a cyclical derailleur hiss that flows on through 18 minutes of atmospheric metamorphoses, and marks yet another of those moments of immersive trance for which many would have been justified in thinking, by the time 2003 rolled around, Kraftwerk had lost the knack.

Typically Kraftwerkian in its focus on an element of daily life that would be considered beneath the attentions of most songwriters, the descending filtered clangs and shimmering synth detailing of ‘Vitamin’ house a slow-motion paean to, well, vitamins. The acid-flecked drive and starlit pads of ‘Aéro Dynamik’, meanwhile, see the band dip a wing simultaneously in the direction of both the Berlin and Detroit techno variants which they played such a large part in creating. Seemingly referencing the serious cycling accident Hütter suffered in the Alps in 1983, ‘Elektro Kardiogramm’ begins with a heartbeat and a similar respiratory sample to that which opens the original ‘Tour de France’. Fascinatingly, it contains some discordant organ-style playing embedded deep in the mix that seems to hark back to the improvisatory passages of 'Autobahn'. Utilising a delicate, tightly-sprung breakbeat and minimalist melody line to develop its powerfully claustrophobic feel, 'Elektro Kardiogramm' also underlines the priority Tour de France awards the 'track' in favour of the 'song', and perhaps suggests the reason for the 'soundtracks' suffix in the original title.

Slipstreaming one behind the other, the tracks Tour de France comprises are wonderfully self-assured pieces of work. Even as the album slows into the somewhat meandering bleep-laden territory of Ralf Hütter solo composition ‘La Forme’ its litany of cyclists’ buzzwords – _ ‘Preparation/Musculation/Concentration/ Et, condition’_ – exerts a Zen-like aura that proves absorbing.

The album closes with the original ‘Tour de France’, its arrival foreshadowed by a minor-key interpolation of its bright, skeletal melody into ‘La Forme’s brief coda, ‘Regeneration’. Without this it might have felt thoughtlessly tacked on, and it could still be argued that it makes a less suitable concluding track than might have been hoped for. Nevertheless, it remains a winning piece of musique concrète pop, a spinning bike chain and ragged breaths underpinning Hütter’s pre-robot vocals listing the race’s famous stages and infamous climbs.

A valuable addition to Kraftwerk’s oeuvre, Tour de France allows the hope that there might still be one more great album to emanate from the recently relocated Kling Klang studio. Ralf Hütter has suggested that new material might be forthcoming in 2010, but long-time observers will know that holding one’s breath isn’t advisable. Desirable as such a thought is, were we never to hear another note from Kraftwerk we’d still have had as much from them as from any musicians in the modern era. In particular the trilogy of Trans-Europe Express, The Man-Machine and Computer World hold their place in the musical landscape that they did so much to shape, their sublime fusion of human emotion and machine functionality as endlessly evocative and influential as asserted by Hütter in an interview he gave Keyboards magazine in 1992:

“Kraftwerk is permanent. Durability is a central concept in art. Our sounds and programmes are immortal. Thanks to the computer someone else will be able to continue what we are doing...”