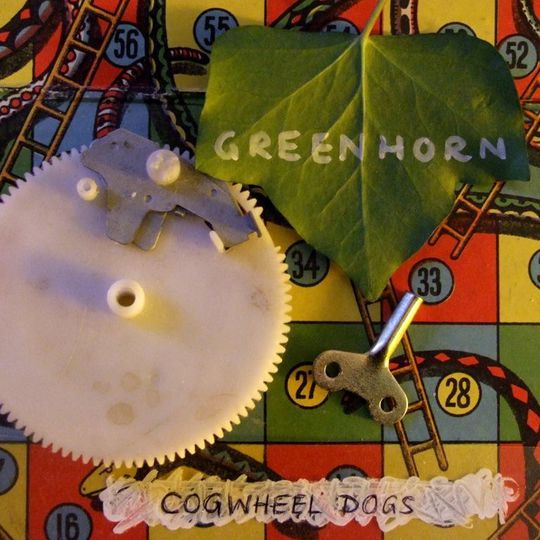 Eccentricity always tends to arouse suspicion in music. It’s often so try-hard and affected that naturally we’re a bit dubious when confronted with it. This, presumably, is why the lowest common denominator, meat-and-potatoes bands tend to be the ones to sell oodles of records. This is all very logical, if a little depressing. So, with that in mind, maybe we need to embrace the oddballs a bit more.

Step forward Cogwheel Dogs then. Consisting of artist / singer Rebecca Mosley and bookish cello-thrasher Tom Parnell, they’ve been recording together in Oxford for four years, honing their sound and giving away most of their output on their website. Debut EP Greenhorn is their first full release, and features four new songs.

The EP might clock in at less than 15 minutes, but there’s a hell of a lot crammed in here. The twin forces of Mosley’s bewitching voice - which can go from little girl lost to demented she-devil like the flick of a switch (often in the space of the same song) - and Parnell’s unrestrained, ultra-distorted cello are the band‘s strongest weapons. On opening song ‘Kitchen’, the two combine to create a sinister, menacing atmosphere that hangs around Greenhorn like a morning fog that won‘t quite lift.

Mind you, there’s more to Cogwheel Dogs’ sound than just cello and voice. Mosley and Parnell employ a host of other little flourishes; a strummed egg slicer here, a creepy covert melody there, making the sound a lot more expansive than you would expect a home-recorded EP made by a two-piece to be.

The band’s lyrical content ranges from the trivialities of day-to-day life (such as the joys of boiling, slicing and peeling an egg) to the completely outlandish. Closing track ‘Octavia’, for example, starts off with the lines "The recycling box is all mixed-up / I will fish out your plastic from your cardboard" before going off on one about how "Octavia has eight thousand arms". This emphasises the point that this is an EP of contrasts and contradictions; sweetness and menace, delicacy and strength, poignancy and aloofness.

It’ll be interesting to see how Cogwheel Dogs bear up over the course of a full album. The dense feeling of claustrophobia coupled with the vocal dramatics could get a bit too much, but there’s also a sense of urgency in the recordings which can offset that. Either way, Greenhorn is an interesting taster of what’s to come.