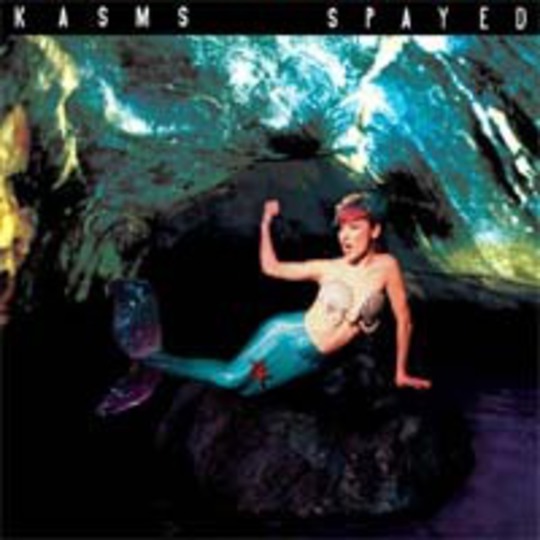 It was only a matter of time before perennially unsettled noise addict Rory Brattwell turned up again. A fugitive of briefly tipped NME faves Test Icicles and RAT:ATT:AGG, as well as several lesser-trumpeted outfits, he’s been a key behind-the-scenes player in London’s garage punk scene for some years now.

With KASMs and its collaborative, DIY-hearting assault, it sounds like he might just have found his fit. Led by the scruff of the neck by singer Rachel-Mary Callaghan, whose on (and, frequently, off) stage performance style could be fairly described as ‘confrontational’, KASMs have channelled their very own urban nightmare into a compelling whole on their debut album.

Taking its cues as much from British post-punk outfits Siouxsie & The Banshees and Bauhaus as it does from Olympia’s crucial Riot Grrrl movement, Spayed plays out its unease over half-an-hour of tensely-coiled, spiky melodrama. It’s unsettling in large part because the band rarely jerks up to full throttle, instead preferring to shadow-dance around its listener like a cat toying with its hapless prey.

Inevitably this album doesn’t grab you by the throat quite as effectively as the stage show, but its live reel-to-reel aesthetic at least pulls you in as close as possible. There’s no denying KASMs relies more on sheer force of personality than songs at this point (no bad thing), but ‘Taxidermy’, ‘Murmer’ and the dubiously-titled highlight ‘Bone You’ all make their individual presences felt amongst the pack.

Even though the fast-slow-fast-slow running order tends to hamper the pace a bit, Spayed is still approximately 84 times more exciting than Lightspeed Champion (yeah, I said it). While that on its own may not be cause célèbre, there’s much to enjoy here for anyone who prefers their fidelity low and their volume high.