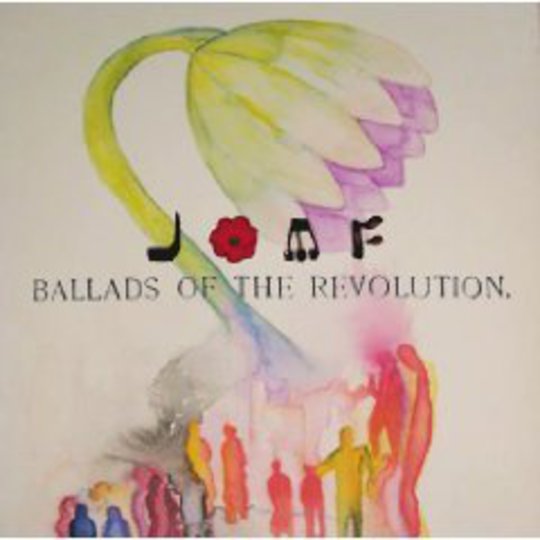 Anyone who attends performances of improvised or otherwise ‘experimental’ music with any sort of regularity will probably be familiar with that sinking feeling of self-doubt that comes when watching an ensemble misfire badly, live on stage. Why give over so much time to listening to awkward nitwits make a dismal, focus-free racket in the name of ‘art’? This writer’s definitive moment of this type arrived, about five years ago, at the hands of Portland’s Jackie-O Motherfucker: a set of pointless scrabbling, painful like watching a tramp try and thread a needle, and ending with the sort of ‘turntable manipulation’ that would get a toddler told off by its DJ dad. You felt that your friends from school might turn up, just to point and laugh at you for what you, an adult, choose to do for entertainment.

It was all very frustrating because JOMF were/are a band whose critical acclaim had some justification. Their prodigious output, and the limited nature of much of it, makes picking out their best work a bit of a game of chance, but ATP’s double-CD reissue of early LPs The Magick Fire Music and Wow! is pretty friggin’ essential if you wish to sample the cream of what gets called, seemingly to no-one’s satisfaction, New Weird America or the free folk movement. Now 15 years old as a band, their more readily available albums have become less obtuse and abrasive with each release, the members – Tom Greenwood being the only constant in the lineup – seemingly getting a taste for Americana and the more structured notion of psychedelia. Ballads Of The Revolution, their second album for UK indie Fire Records, is probably their most accessible release to date. It will only freak out the squarest of squares, but its six tracks contain golden sparks within sheets of leaden drone.

In an unusual move, Ballads Of The Revolution’s first two songs were both written by other people. ‘Nightingale’, flagged here as a traditional ballad, appears to be a version of Friedrich Schiller’s poem ‘The Maiden’s Lament’, which comes with the rather grand pedigree of having been set to music by Schubert in the early 19th century. Carried along on a frame of opiated country-rock guitar, it’s also Ballads…’ first instance of JOMF getting their spacerock suits on and slavedriving their flange and delay pedals under a hot sun. The low-gravity droning of Spacemen 3, early Spiritualized and Bardo Pond is recalled not only here, but on ‘Skylight’ and ‘The Corner’, the latter of these drifting off into a very heady ether that sounds a bit like Amp or some other largely forgotten ‘bedroom ambient’ band from the Nineties. (It also features that infernal turntablism, allegedly, but it’s unlikely anyone other than Greenwood would recognise it as such.)

Track two, ‘Dark Falcon’ – it would have been good if the theme of avian titles continued throughout the album, but sadly no – is a remix of sorts, of a track by LA tapeloop architects Lucky Dragons. The degree of commonality between the two bands, that being a shared desire to build ornate and beautiful structures from semi-formed clatter, crash and fuzz, is made flesh here with some success. It says here that Honey Owens is singing the liner notes from an old album by The Mamas & The Papas, which is an amusing riff on the hoary crit cliché about great singers being able to intone the phone book, or a shopping list, and give it emotional impact; still Owens is hardly the definition of a great singer, and you can’t really make out the words. You may well think it sounds a bit like ‘Tomorrow Never Knows’, mind you.

Closing number ‘A Mania’ sings of “the deep blue sea” over smears of wah-wah guitar and plaintive electric folk, a testament to America’s musical freak flag fliers of the last 40 years. Sonic Youth have been dubbed a sort of Grateful Dead for the modern era by more than a few people; while JOMF are unlikely to make that title their own, enjoying a fraction of SY’s fanbase, ‘A Mania’ – and, ultimately, Ballads Of The Revolution as a whole – indicates that the reference point can serve as a compliment. Their brilliance might only flash up sporadically but as long as it’s present at all, it’s worth knowing Jackie-O Motherfucker are around.