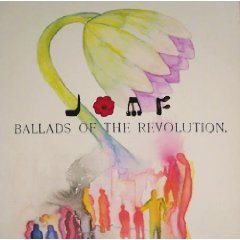 Jackie-O Motherfucker - Ballads Of The Revolution

in 2005, jackie o motherfucker released the critically acclaimed 'flags of the sacred harp', followed by 'valley of fire' in 2007, in between these milestone studio records, the band has released several sprawling live sides, including - 'america mystica', 'freedomland', and 'the cryin' sea'. the release of 'the blood of life', in 2008, the bands first record for influential uk imprint fire records, captures one of these moments. recorded live in one take at the vpro radio studio in amsterdam, the record combines the fragile immediacy of a live set with the sound quality of a recording studio, and provides the band with a starting point for a new body of work. 'ballads of the revolution' is the bands 10th studio record, and the culmination of 15 years spent defining their unique take on american music. the record begins with an arrangement of a traditional ballad, 'nightingale' features greenwoods vocals and guitar with the lush, open accompaniment of bob jones' double bass and the pedal steel guitar of lewi longmire. 'dark falcon' is an improvisation and re-mix of a song written and recorded by the lucky dragons. built on samples and loops of the original recording including vocals by honey owens, appropriated from the liner notes of a record by the mamas and papas. side one closes with jackie o motherfucker original, 'skylight', which has been a part of the bands live set for a few years, and has been been beautifully rendered in the studio. side two begins with a brand new song, written and sung by greenwood and owens, 'the corner' begins with the pulsing bass of a roland keyboard, accompanied by turntable manipulations and the sparse, sting of owens guitar, its dark minimalism, a new classic moment for the band. 'the cryin' sea' was written in arhus denmark, during an amazing live set where an enthusiastic audience pushed the band to bonkersville. featuring incredible guitar work by nick bindeman, and special guest michael dustdevil, who also appears on 'skylight', and fills out the recording with raw, fuzz guitar. the closing track, 'a mania', is one of those rare, jackie o motherfucker radio friendly tracks. written and sung by greenwood, with beautiful wah-wah guitar lines by joanne robertson, vocal accompaniment and closing fuzz guitar solo by honey, the songs melancholy, knocking us out.
description from www.roughtrade.com