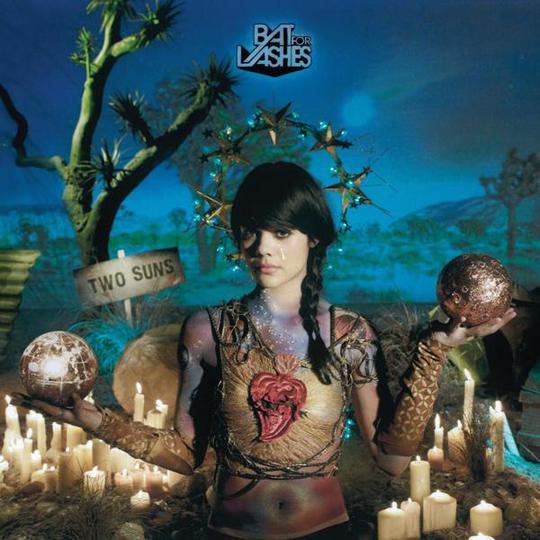 While a rightfully feted debut, Bat For Lashes’ Fur And Gold album of 2006 seemed to overachieve too quickly for its intimate design to be properly processed. A Mercury nomination and a couple of BRIT nods look good on the CV, but to pin such accolades upon the sleeve of Natasha Khan is to weigh down the singer with expectations beyond her control for the anticipated successor.

Khan’s songwriting is not the kind that broad audiences can take immediately to – in this respect it’s fortunate that Klaxons pipped her to the Mercury post in 2007, or else the splendour of Fur And Gold would certainly have been irrevocably blighted by over-playing and cooption by all manner of inappropriate mediums. As it stands, the debut remains something of a word-of-mouth sensation: yes, its profile was raised considerably by televised ceremonies, but ultimately it’s the impression it leaves upon the open listener that lasts, and leads to recommending between friends.

Two Suns is, predictably enough, absolutely not more of the same – an artist like Khan cannot justify repetition in her work, such is the personal drive to expand the palette. It’s a bolder affair than its predecessor, a fact made instantly apparent when opener ‘Glass’ explodes into percussive life like nothing that’s come before it in its maker’s canon (maker, singular, for while this album has a greater ‘band’ feel than Fur And Gold, Bat For Lashes remains primarily a vehicle for Khan alone, her collaborators operating on a revolving door policy). The song seems to be setting up a passage of similarly playful-of-arrangement pieces, such is its statement-of-intent feel; Khan rhapsodises in a manner wholly unique, lyrically touching upon the microcosm of a pair’s relationship, its parallels in the vast universe – it’s the first sign of the album’s strong conceptual backbone, examining the duality of the self and its effects on the environment near and far.

But while ‘Glass’ sets an arresting agenda, its not followed by anything approaching a mirror-image of itself; instead, ‘Sleep Alone’ echoes the ethereal elements of Khan’s debut, while maintaining the lyrical themes outlined in the previous track. Already there’s the sense that sequencing is a vitally important aspect of this record, as talk of “a two-hearted dream” relates to the split-personality lyricism that characterises much of what unfolds. The listener can take Khan’s physical manifestation of this other side to herself, named Pearl, as a literal foil to the instrumentally understated but emotionally weighty efforts intended as the work of the ‘real’ Bat For Lashes, or simply dismiss the proposed narrative and enjoy the album as the words of a single soul – either way, Two Suns proves an engrossing, enlightening experience.

So ‘Pearl’s Dream’, one of a handful of tracks ably assisted to completion by members of Yeasayer, can be interpreted as a sub-plot diversion from the main arc, or received as a stylistically standalone piece designed to reinvigorate the listener immediately after the piano-led ‘Siren Song’, this record’s most open-hearted paean to a lover to be (albeit delivered ‘as’ Pearl if you listen carefully to the echo-soaked vocals). The sequencing drives the story, leading finally to the Scott Walker duet ‘The Big Sleep’ – again a piano-driven affair that quite literally brings the curtain down on all that’s been, featuring a spellbinding vocal from Khan that pushes her abilities to the edge of their range – but so far as coherence of a compositional kind goes, Two Suns is patchy in its tonal segueing.

At times it slips from incredibly moving, heartfelt honesty – take ‘Moon And Moon<’ as an example, an early highlight at track three – to borderline pastiche. ‘Daniel’, the album’s lead single, ranks among its least lasting-of-appeal efforts, far too close to Fleetwood Mac territory (and we’re talking ‘80s Mac at that) to showcase the talents of an artist celebrated to date for her uniqueness, her otherworldly charms that sit aside from the mainstream while also fluttering their eyelashes flirtatiously at those who choose to make an effort and allow themselves to be fully immersed in sumptuous serenity.

Then again, ‘Daniel’ does stand up as the fun side of Two Suns, its accessible face that masks a complex study of insecurities, doubts and, yes, the ever-puzzling two sides to every story standpoint that informs the key lyrical themes. We’ve all addressed these questions ourselves, assessing expected results against one another. It’s not as schmaltzy as a Sliding Doors scenario – imagine how that’d derail a promising career – but Khan’s inner arguments, battling a gut feeling that says go for it, lend drama to a record that’s strong on instrumental decadence – not in an over-the-top sense, but with measure and meticulous spareness when necessity calls – while always clear-voiced enough to make its message heard. And this drama carries it to its climax, through gospel interjections, flirtations with psychedelic pop patterns, and a succession of stirring vocal turns from our protagonist.

Two Suns is not the commercial-cored second record that some quarters might be expecting, a slightly cynical collection centred on exploiting the attention Fur And Gold courted, albeit unexpectedly. Rather, this record is one made with the artist’s full investment, every ounce of heart and soul poured into it visible for all to see. Its conceptual angle might put some off, but honestly: if you’re not into the whole singing-through-a-character angle (see also: of Montreal, Beyoncé, Bowie of course), it need not effect your enjoyment of what is a texturally rich, compositionally ambitious and incredibly intimate release.

Expectations, then – they simply serve to heighten the impression of a record when one emerges as singularly impressive as this.