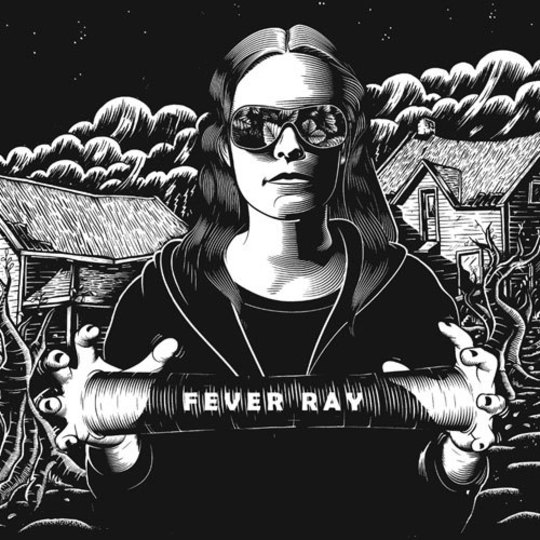 Electronic music – when it’s being made by natural performers, rather than solitary craftsmen – has always gone hand-in-hand with fluid identities; multiplying them, extending them, erasing them. Each medium, says McLuhan, is an extension of man; for every extension, says Baudrillard, there’s a corresponding amputation… or castration. These are the kind of dark jokes and symbolic manipulations you’d expect from Karin Dreijer Andersson AKA Fever Ray: are you entering another world… or being trapped in it?

On Silent Shout (2006) The Knife’s secret theme was gender anxiety & gender dysphoria; it’s unclear who’s singing when Karin’s vocals are doubled and pitch-shifted: “I had a dream I was in the woods again / calling me woman and a half-man / I had a dream all my teeth fell out / a cracked smile and a silent shout” Is another lyric’s reference to “chemical castration” a woman’s revenge on rapists, or empathy with someone for whom masks aren’t enough - defamiliarizing the artifice of gender (common to all) by focusing on those who need surgery rather than just costumes? In any case, The Knife were creating a dystopia through electronics.

Thematically, and for the quality of songwriting, Fever Ray fully deserves to be considered a follow-up to Silent Shout; nonetheless, it’s also a line-in-the-sand for The Knife-as-pop-entity, a Kid A-like demand to be respected on the artist’s own terms, or left alone. You can’t dance to any of it, whatever the remixers may do, but you can certainly inhabit it. The debut single (and opening track) clears the slate – frustrating anyone hoping for another ‘Heartbeats’, and promising artistic exploration to those who stay at the front, listening closely. “If I had a heart / had a heart…” groans the bass-voice of Karin’s tin-man/woman, obliquely announcing that we’re now entering an Oz not suitable for children. Nonetheless, she briefly brings in a shriller voice to recount (what she said in a recent interview was) her own child’s experience of “dangling feet / from windowframe”, i.e. testing the limits of this new world she’s arrived in.

‘When I Grow Up’ (track 2, and the second single) continues the trend of withholding its hooks until we-the-listeners slow down, whilst establishing the album’s theme of transformation in the unaccompanied first verse: “When I grow up / I want to be a forest deer / and run through the moss in high-heels...” The emphasis is on the words, and rightly so, because it’s a brilliant condensation of images: suggesting a continuity between shamanic powers and the everyday construction of femininity, the natural and the artificial. As a piece of music it’s exquisite, but you have to wait an unusually long time for the keyboards. That, perhaps, is the message, whether for the listener or for her young children: life may be repetitive, but you’ll find beauty in it; you may be forced to wear a mask, but you get to choose what the mask is. The least enjoyable track (i.e. the only one with 3 stars on my iPod, not 4 or 5) is ‘Concrete Walls’ where the vocals slur to an inhuman crawl. Still, it’s thematically important – depicting the delirium of post-natal sleeplessness, with Karin’s unprocessed and almost sensuous breath-sounds struggling to be heard beneath the robot-vocal. To someone unaware of Karin’s circumstances, it speaks to the dehumanization of any worker numbed by routine; the vocal may be depressed, but refuses to be mournful, and a subtle variation in tone, at the very end, lends a hint of pathos to the melody that had been cycling pointlessly up until then.

These are just a few clues how to get something from the album’s more subdued moments, but the fact is: at least a couple of songs here are indistinguishable from the best of The Knife so far (e.g. tracks 4 & 5, which have the sprightliness of ‘Pass This On’ and 'Neverland'), whilst others surpass The Knife on more idiosyncratic terms. On the penultimate (and best) track, Karin delivers her most feminine and f/x-free vocal (over a throbbing synth part, slowly rising with post-rock grandeur), and it’s beautiful as you’d expect... but you also realize you’ve never heard that voice before. There, she sings what could be The Knife’s manifesto: “we cover our heads / and reveal our souls…” The irony is: she’s singing an animal’s vision of city-streets at dawn. For Karin, sounding conventionally feminine is just another mask.

As the album progresses, the repeated use of near-identical arrangements should be a weakness, but proves to be a strength... if not an illusion (i.e. that they are the same). The minimal beats on each track prove to have been constructed with incredible attention to detail, as are the smooth synth washes, and electronic simulacra of birdcall or animal noises. The tempo may be nightmarishly unvaried, track after track, but it’s composed of glitches, bouncing balls, and ‘Coconut’ puts a delay on the eponymous percussion to soundtrack the approach of some futuristic war-machine. Track 4 opens as a banal conversation about domesticity, but the rhythm-part is played on what sounds like a zither, or a sample of a match-striking, before the sound disperses into ball-bearings rolling across a marble surface – it’s unnaturally fascinating.

Karin recently told DiS that she needs to bring herself down to earth, hence lyrics like “we talk about love / we talk about dishwasher tablets”. Very true – you can dress this up in all kinds of theory – that she’s subverting Romantic notions of the artist by showing the interpenetration of the real and surreal, the ridiculous and the sublime, but you don’t need to admire her intellect to enjoy this, just be grateful she welcomed you into her home. Likewise, The Knife might be a concept-driven duo infiltrating synth-pop to interrogate gender identity with their masks and costumes, and manipulating vocals and visuals alike to masculinize and emasculate in equal measure, but that actually means they’re showing what electronica IS with more clarity than most, rather than taking it down some peculiar alleyway with niche appeal at best.

The Knife’s breakthrough album, Deep Cuts, risked annoying the listener by insisting on too many changes of direction, whilst their magnificent Silent Shout is a flawed masterpiece for sequencing its tracks to come-up in clubland, and then drift into vague dreams. Who knows what Knife-man Olof Dreijer will bring back from his (literal) exploration of the Amazon, intended for an electronic opera about The Origin of Species (due September 2009); for now, this may be his sister’s most artistically satisfying album.