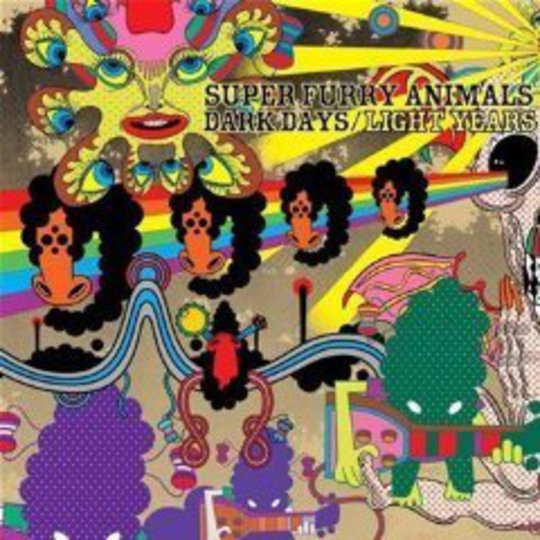 Lest we forget, it is a matter of record that Super Furry Animals spent the marketing budget for their first album on a tank. That it was then fitted with an impressive PA, given a lick of technicolour paint and toured around the festival circuit belching techno music from its pacified innards is remembered hazily by revellers who danced on its exoskeleton.

Even in 1996, a time in which huge sums were regularly spent on giving major releases the impetus demanded by boardrooms bloated on good times, it was considered at the very least, avant garde; to have come from a band fresh out of the blocks on an independent label, it was flat-out ballsy. More than a decade later, the memory of that dashing promotional stunt neatly impales the reasons as to why Super Furry Animals occupy the exclusive air towards the summit of their particular mountain: Their unnervingly keen instincts, coupled with the real need to make music outside of consideration to their work’s ultimate commodification has derived success on what essentially amounts to their own terms; eight albums in and there has been but a mere spattering of filler.

It seems in keeping with this tradition then, that Dark Days / Light Years marks a departure from the traditional songwriting and joyously lush orchestral swathes that typified SFA's last two albums. The glossy production and Dennis Wilson derived meoldies had been mined so thoroughly on Lovekraft and Hey Venus! that to remain within the dynamic would have yielded increasingly dimished returns. So with nary a backwards look the band has now rifled through the musings that by necessity were previously cut from sessions for reasons of continuity, and made an album that is shorn of much of the prior symphonic minature. Instead we have a work hot-wired with fizzing, highly-charged vignettes which when taken as a sum are likely to equate to either Super Furry Animals most or least-liked album - depending on individual taste.

For those who have enjoyed their brilliantly executed ballads since they first released 'If You Don't Want Me To Destroy You', enthusiasm might be slightly dampened by the knowledge that Dark Days / Light Years is shorn of all concessions to the craft; SFA’s seemingly under the impression (perhaps rightly) that there have been more than enough contributions to the form over recent releases.

What sets this album apart though is its sustained attempt at departure, the feeling that the reigns have been removed for the duration. ‘Crazy Naked Girls’ is a zeppellin-echoing freak-out; ‘Moped Eyes’, a funky reminder of what made peple so attracted to Gruff Rhyss' recent Neon Neon sideline; and ‘Inaugral Trams’ with it's germanic, Nick McCarthy-spoken monologue, is a mechanically efficient worker bee, ticking throughout its duration. Elsewhere, ‘Helium Hearts’ is the sole song that wouldn’t feel out of place on Hey Venus! and the riff-ridden ‘White Socks / Flip Flops’ contains the choice line, "Want to be a writer / And be a keen reader." It’s rapid-fire stuff but rather than being a musical progression, much of what is here contains echoes of SFA’s prior releases; ‘Inconvenience’, for example, is almost a carbon copy of their 2003 single, ‘Golden Retriever’.

That being the case, all is forgiven by the albums mid-point highlight: a shimmering paean to the band’s native Welsh capital, ‘Cardiff in the Sun’ stands out far and away as the finest song on the album and one of the best in Super Furry Animals’ entire catalogue. It builds from a twinkling refrain into a gleaming, revolving diamond. When ‘Lliwiau Llachar’ collides into closing track ‘Pric’, we are similarly treated to a spiralling, high-voltage locomotive-finish.

There's still something that lingers, and it might be going against the grain to say so but Dark Days / Light Years is chock-full of spirit whilst also lacking some of the soul that was always a necessary ingredient in SFA’s compelling brew. Be it the closing trio of tracks on Radiator, Rings Around the World's ‘Run Christian Run’, or Lovekraft’s ‘Cabin Fever’, Super Furry Animals have always engaged on a level beyond that of unbridled pop music and aside from perhaps ‘Cardiff In The Sun’ there’s not much here that gets under the skin in that way. Then again, if it’s their lighter side that appeals, they’ve never made such a consistent pop album, and I use the term with not the slightest hint of cynicism.