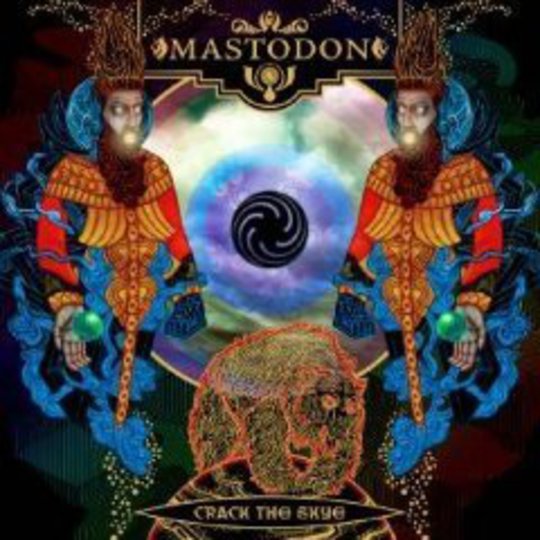 If Mastodon weren’t so astoundingly accomplished on a technical level, as musicians who’ve entirely mastered their heavy metal art, then taking the Atlanta foursome seriously would be very difficult indeed.

Firstly, there’s the name. Apologies to dirty-kneed archaeologists out there, but essentially naming yourselves Fuck-Off Enormous Extinct Elephant doesn’t tick all that many boxes of cool. Black Sabbath it sure ain’t, and everybody knows that if you’re absolutely insistent on naming your band after an animal, make it some variety of tiger. Tigers are way cool, elephants significantly less so – one will eat a sticky bun from your hand, the other the bun and your hand.

Secondly, there are the lyrics. We’ve had a whole album based on Herman Melville’s most-famous tome, and now we’re subjected to wordplay straight from the World Of Warcraft screen: “The demon skin is covered in fine mist / Opened his hand in my hand / Holding my eyes to the future / Hovering above myself.” Some pimpled and bespectacled teenager who won’t get laid for another five years is having a wet dream to lyrics like these, right now. Yes, that is a shiver that just ran down your spine. Mine too.

Yet, we forgive Mastodon these should-be shortcomings, because when every last avenue of critical analysis is extinguished, and every potential failing assessed, the band Still Fucking Rocks – harder, better, and faster than any of their peers. Throughout Crack The Skye they repeatedly deliver the kind of dizzying riff-work that’s designed solely to frustrate the shit out of Guitar Hero worshippers by out-manoeuvring even the fanciest PlayStation fingerwork. Players of said six-string parts, Brent Hinds (who’s also an accomplished banjo player) and Bill Kelliher, build layers of amplification so very thick that listening to portions of this record is akin to being trapped in a tunnel beneath the sea with roaring behemoths at both exits – it’s intoxicating in its beastly beauty, but all the while you feel there’s no way out, that either the walls will crumble or you’ll head towards a to-the-death duel you can’t possibly win.

Vocally, this is Mastodon on a whole new level – where debut Remission and its follow-up Leviathan presented battle-cry bellowing to the forefront of the mix, and immediate predecessor Blood Mountain diluted this aggression partially, subsequently opening doors to whole new markets, Crack The Skye never once relies on hoarse larynxes to hold down audience attention. Twin vocalists Hinds and (bassist) Troy Sanders weave their fantastical imagery with clarity unbecoming of many a metal band; as such, they build bridges to the progressive-rock world, something that will appeal greatly to fans of total album immersion. Get sucked into this black hole of a record and there’s no telling where it’ll leave your mind.

Of course, the subject matter – by the band’s own admission they’re exploring realms beyond the physical plane, encouraging listeners to join them as they venture into other worlds of out-of-body escapism, plus there’s on-record proclamation of Russian Tsar themes – will divide opinion: on the one hand, it’s possible to interpret everything as utter nonsense; the other, engrossing material that could spawn more screenplay drafts than a thousand role-play games for whatever next-gen’ console you call your own. (Speaking of which, a film version of Shadow Of The Colossus? That’ll never work.) But while the band expresses themselves in a way that conveys a certain distance between true feelings and their recorded output, it’s worth noting that drummer Brann Dailor’s late sister was called Skye, and he’s previously told reporters that this album is something of a tribute to her; she committed suicide aged 14. Mask its heart with sheets of steel it may, but Crack The Skye carries no little emotional weight alongside its mightily muscular and meticulously masterful musicianship.

Which, ultimately, sells it above all other evident traits – from Dailor’s phenomenal drum work through to the ever-entrancing interplay between Hinds and Kelliher, Mastodon’s end product is mightier than The Sword. And Slayer. And… fuck it, and Metallica. Wanna hear the real masters of puppets? Pop this record on and recoil as you realise the aforementioned are but limp and loose-limbed marionettes compared to Mastodon’s array of all-conquering modern metal cacophonies.