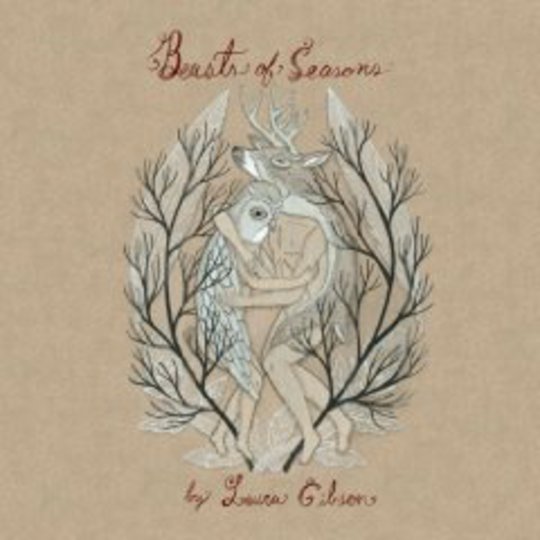 Among the flights of psychedelic fancy and dizzying jams that made up The Dodos’ Visiter album last year, there lay a number of treats unhindered by their relative lack of bombast. Chief among these was the sparse ‘Winter’, which found Meric Long mulling over a season stretching interminably ahead of him in a mire of heartbreak and gloom. It’s that album’s vibrant opener that concerns us though, because as unfair as it may be to begin an appraisal of one artist’s work through consideration of her appearance on another’s, it’s where these ears first experienced the quietly bewitching tones of Portland-based singer-songwriter Laura Gibson.

Gibson is also acquainted with the likes of Colin Meloy, Menomena and Laura Veirs among other mainstays of Portland’s musical community. Many contribute here, though Beasts Of Seasons never feels anything less than her own creation – a poignant meditation on life and death that rattles with sincerity and slow-burning melodies.

Divided into ‘Communion’ and ‘Funeral’ songs, an introspective nature nevertheless reigns throughout. Gibson’s voice takes centre-stage, and a remarkable instrument it is too: set against keening cellos, piano and plaintive acoustic guitar, it’s commanding and furtive all at once, without ever coming off showy. Listening to these studied tales of matters corporeal – where the changing of season is felt in the bones and mortality is an ever-present concern – is akin to a soft, persuasive whisper in the ear upon stirring. Indeed, it’s incredible how otherworldly this LP feels at times, a mournful blend of tried and tested instruments led by a captivating vocal presence. Furthermore, interspersed among its songs is the sound of a parade that was passing through upon recording, a fortuitous happening that lends its naturalistic air even more credence.

Gibson wrote these songs in a room overlooking one of the oldest graveyards in Portland, and to say these oppressive surroundings colour the subsequent recording is something of an understatement. Although it’s probably not the first disc you’d reach for to get the party started, its languid tone rarely becomes overbearing.

‘Funeral Song’ exemplifies this perfectly, Gibson’s delicate vocals assuredly wrapping themselves around acknowledgement and recognition of our shared transient nature. “If these pale bones could sway,” she proposes, “they would march to a funeral song…they would not wish to keep you tethered to their arms.” Built around a bare, simple guitar motif and embellished by horns and deep backing vocals, it’s startling and wholly memorable: at once the crux of the album and a glorious summation of all its thematic strands. Crucially, despite being ostensibly sad in tone, it’s palpably uplifting too.

While Beasts Of Seasons is by no means anything radically new, it proffers us a sharp and immaculately executed take on well-worn, universal themes. On the mesmeric ‘Sleeper’ Gibson equates the shifting of season with a relationship passed; ‘Spirited’ notably introduces percussion to the fold (upping the tempo exactly as implied); while its closing ‘Glory’ sees her balance familial bereavement with imminent birth in a strikingly personal and elegant manner.

In confronting life’s ultimate inevitability while recognising its ceaseless capacity to confound, she’s delivered an arrestingly understated, accomplished work – one that ought to see her emerge from the shadow of her contemporaries with no little grace.