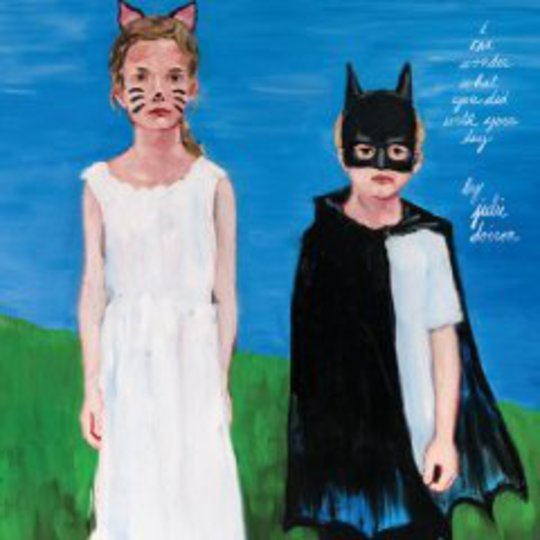 So begins the ninth album by Julie Doiron, ending on a similar note with an acoustic ditty about riding bikes and being glad to be alive. With its naïve-but-effective mix (a looped “dreams / dreams / dreams…” panning one way, as the guitar-part shifts the other, on the fade-out) it could almost be Kimya Dawson or The Moldy Peaches, if there’d just been a dash more profanity. In between those tracks with their breathey vocals, and 1-2-3, 1-2-3 rhythm, the power-pop moments chug along like early Weezer (‘Consolation Prize’; and ‘Borrowed Minivans’), and the slower moments equal the crumbling beauty of Cat Power’s Moonpix album (‘Blue’), or Mazzy Star, where the rhythm stumbles uncertainly until a heavily reverbed lead guitar rises up to soar and swoop about.

Still, as much as Julie Doiron creates her own lyrical world, this keeps taking me back to last year’s Kimya Dawson gig at the Union Chapel. Bear with me a moment while I explain… There were children down the front, and cupcakes on sale, and a dozen embarrassing singalong songs from the Alphabutt album, and most of all a strong sense of “why are we here, again?!” – but by the end there was a heart-swelling sense that we’d been in the presence of a wonderfully sweet-natured woman who grew up too fast, and lost people to drugs, and almost lost herself to drugs, and when she sang about being a speck of dust in the giant’s eye she really meant it, and hey, redemption is possible without Bible-thumping.

Julie Doiron has been on the radar as a solo-artist for more years, now, than she was actually in Eric’s Trip. (They’re playing reunion shows, incidentally.) Maybe she grew up too fast, in her own way, and even if she doesn’t have the scars, and self-loathing, and tattoos to prove it, she had plenty of reasons to pay particular attention to the simple pleasures the rest of the world has had to content itself with, after getting out of the van, hanging up her guitar, and getting on with motherhood.

Listen-after-listen, this induces the same warm fuzzy glow that evening did, and if Doiron lacks the druggy mysticism, she has the joie de vivre in spades. Lovers walk around hand-in-pocket, joking about stealing their wallet, and that’s as much humour as you need to tell you the romance is real. When Julie Doiron sings about picking up her guitar at the end of the day and “giving it some strokes” as she thinks about “you / in your little house” that’s exactly what she’s doing. In the song, ‘When brakes get wet’, the chugging guitars literally swerve and veer wildly into discord before a “Look out!” and a sample of breaking glass; given the sardonic lyrics “everybody tells you / what an amazing couple you had been” the car-crash metaphor is so right, and so obvious, that it’s endearing she went through with it, rather than trying to be original.

Beneath the simplicity, this is anything but disposable music, because all of the sentiments are hard-won. When it comes to lo-fi that’s full of wrong notes and distorted instruments, there’s a world of difference between the cerebral agenda to introduce an aleatory component, the jazz musician’s teasing avoidance of resolution, and this… the kind of delicate playing that means hanging onto each note that doesn’t belong in the melody (plucking the wrong string, say) for its own capacity to convey emotion, regardless. It’s what Cat Power and The Moldy Peaches (and, in places, the Velvets) did in their prime; caring about what’s actually there, and what actually happens, rather than aiming at a perfect performance, representative of an ideal no-one really lives. All in all, a precious record, this.