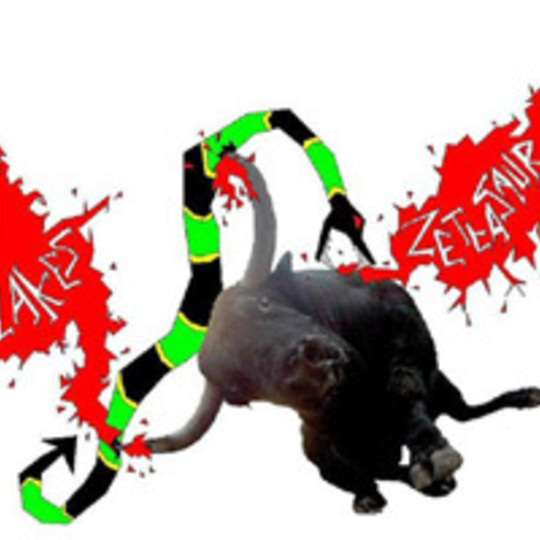 Recently tipped on DiS by Gallows (interview), it’s Lakes who impress first, their ‘Captain Fidanza’ rocketing out of the blocks, a mess of discordance and purpose. It owes a degree of debt to wonky guitar bands past – Bear Vs Shark and Cap’N Jazz are two cornerstones propping this four-piece’s work up – but sparkles with an invention entirely the band’s own. Versatility is on Lakes’ side, too, as the slow-burn ‘Bar Fly’ counters its book-ending blasts of bombast to excellent effect.

Zettasaur’s influences would seem to lie closer to their own home, as ‘Show Me The Pinky’ ‘does’ Charlottefield quite brilliantly, all clang this and twang _that. With a sound more, hmmm, _metallic than their split associates, the four-piece recall the restrained histrionics of Shellac without coming across as simplistic clones; again, there’s enough originality in these fractured rhythms to warrant attention beyond this release alone. Live, they’re growing in confidence and developing into a formidable act capable of dislodging any headliner’s egos; on record, it’s clear they’ve already found their feet. More of this, please.

And that applies to both bands, if they’d be so kind.