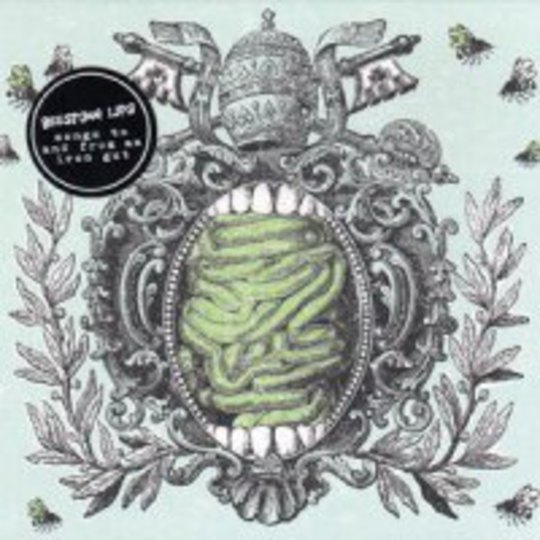 Late to this party though DiS is, we’re pleased to find it’s still in full swing: Beestung Lips don’t do anything by halves if this six-tracker is anything to judge their hyperactivity by, and their punk-rock vitriol is considerably more acidic than most.

The Birmingham four-piece are a regular fixture on hometown support bills – in December they’re to support the David Yow-fronted Qui, for example – but Songs To And From An Iron Gut is substantial of riff and riot enough to warrant headline sets in the none-too-distant future. If A&R eyes and ears are scouring the land for a punk act to categorise as the ‘next Gallows’, they could do worse than aim their attentions this way. Best duck when Beestung Lips spit back atcha, though.

Mixing an acute tunefulness with the sort of boisterous noise that befits a band monikered in such a fashion – like ‘Beestung Lips’ could ever sound like Coldplay, really – this EP is an arresting listen from the first play onwards; this writer has racked up at least a couple of hours in its company, and it’s all over in 16 minutes.

Opener ‘Reverse Alchemy’ is abso-fucking-lutely furious, like Since By Man grappling with the Hot Snakes songbook, with just a shade of all things Jesus Lizard in the bass licks. ‘Patch Up My Persona’ is incessantly evil like the best Das Oath, breaking its speedy stride only when an incredible hook-you-in riff starts up, tumbles you about and gobs you out and into the similarly infectious ‘Fixer’. What’s that? “Monkey… I’m a monkey… I’m a monkey in a monkey suit”? Nonsense, but who cares when the drums attack like wasps do ice cream-coated lips in the summertime. Or bees, even: suddenly the name makes a semblance of sense.

Cut to the quick-fix summary: buy this if any reference points offered above tick your boxes; if you like the feeling of slamming your brittle body into walls, chairs, bus shelters and random passers by on the street; if you demand that your punk bands can fucking kill it as brilliantly on record as they can live; and if you want to feel your blood boil for just over quarter of an hour.

And if none of the above applies, fuck off back to The Wombats already.