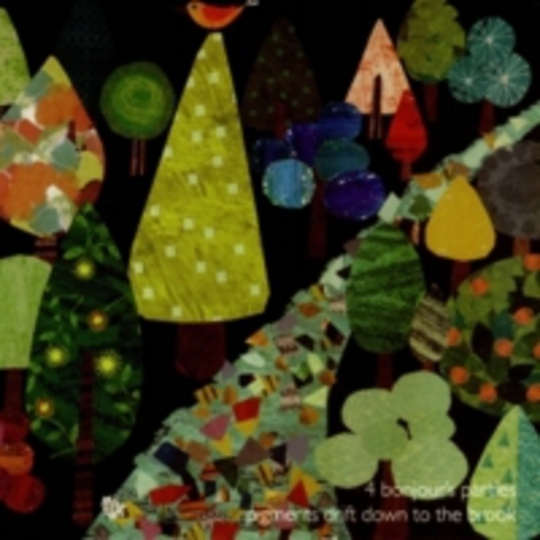 To say that it would not be a surprise to one day find 4 Bonjour’s Parties soundtracking a collection of limited-edition tat on QVC might be a slightly cruel way to begin this review, but the signs are all there as the Tokyo indie-popping sextet walk their line between portraying sweet peace and all-too-easy listening like a drunk teeters on a kerb.

Instrumental for a considerable part and with lyrics alternating between Japanese and English, the seven behind debut album Pigments Drift Down To The Brook arrange a virtual orchestra – quite literally, given the detailed plan that lies inside the CD’s jewel case outlining all thirty different instruments used, which songs they can be found in and colour-coded to each member – of guitars, drums, wind, brass and whatever a harmony ball is, as well as a section that just says ‘noise’. This is not the kind of orchestra brimming with exuberant energy though, more one whose conductor is stoned at the stand - for better or worse, 4BP shy away from any proper volume, steering well clear of any towering crescendos that might shatter their fragile forms and instead choose to be totally sedate.

So it turns out, after neglecting to include anything that could be classed as ‘exciting’, that the endless composure on their part actually leaves them worse off. Pigments Drift Down To The Brook does exactly what it suggests, drifting slowly along at its own pace and taking over an hour to steadily trudge its way through the ten chapters. Its problems mostly stem from the best ideas either being diluted heavily or used frustratingly sparingly; ‘Magpie Will Peck A Hole In My Plaster Cast’, for example, begins with fifteen enjoyable seconds of glitchy laptop electronica before breaking into a jumpy drum pattern over which the slumberous orchestra is laid, initially impressing, but dragged to a slow death five minutes later as the song around it alters rarely.

This, coupled with every song’s desire to reach the five minute barrier – only three don’t make it, missing by a whisker – makes for sadly detached listening, though not one completely devoid of any highlight, as the recital at the end of ‘Amalthea’ breaks down into some (aforementioned) ‘noise’, leading quietly into standout track ‘Nostalgic Was Broken To Pieces’. A slowly-swirling whirlpool of softly-softly folk, near-whispered and teary-eyed, it’s a small reward shining amongst the rough, even if it does come too late to save the album as a whole.

It turns out that none of Mr Bonjour’s four parties were the kind where the police were called to after some stuff got set on fire – instead it’s more of a dinner party; civilised banter over a nice Chardonnay and no dangerous opinions for fear of offending. Yep, Pigments Drift Down To The Brook certainly could become the latecomer swanning in from the pub minus its shirt any second now, but you know it won’t be.

Now, QVC, about those lustrous pearls in three delectable colours.