Transformers: Music from and Inspired by the film 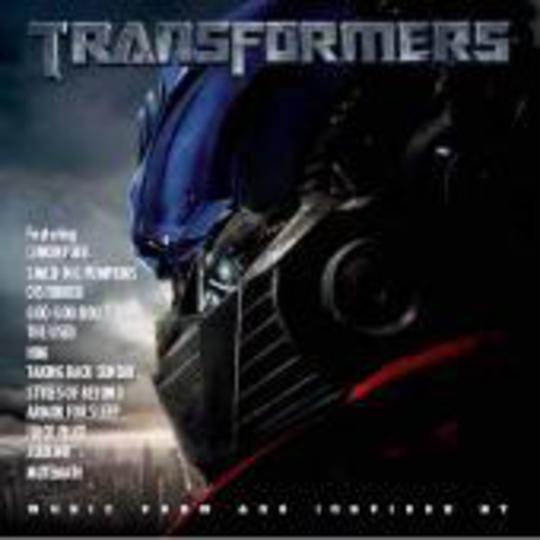 There are few things scarier than being knocked around by a 35-foot robot that’s just transformed from a police car. Being towered over by the aforementioned behemoth whilst he’s shouting at you about eBay is one of them. As happens in the slightly over the top, but ultimately quite thrilling, new Transformers movie.

Yes, the Transformers have been brought kicking and screaming into the digital age. And alongside references to online marketplaces in the film, we have the accompanying nu-metal soundtrack. Possibly in line with the modern age it should be a bit more hardcore, but then again there’s still a lot of creaking post-‘now’ rock bands on Warner Music’s books.

Fortunately, most of the tracks featured on Transformers: OST_ aren’t to be found in the film itself, and even lead-off tracks by* Linkin Park* (‘What I’ve Done’), and Smashing Pumpkins (‘Doomsday Clock’) only appear during the closing credits. Which, in retrospect, is quite fortunate really.

One of the few tracks on the accompanying CD that makes it into the film is the winsome Goo Goo Dolls **with their suitably saccharine ‘Before It’s Too Late (Sam and Mikaela’s Theme)_’. You’d prefer it didn’t appear, but then again, you have to have something to soundtrack the burgeoning, awkward love that blossoms between the geek and street-wise social misfit. And what better than a Goo Good Dolls song? Quite.

Best track on this effort is Mike Shinoda’s guest rap on the sub-‘99 Problems’ musical stylings of **Styles of Beyond. Naturally, ‘best’ means ‘most LOLsome’. To highlight: “Check on the rep – yep, second to none”, and “you’ll be sippin’ fried chicken through a straw”. Good work, Mikey S. HIM and The Used also make it into the film with some bothersome shit or other – DiS was too busy gawking at Jazz being torn in half by Megatron while some puny humans ran around shouting “BRING THE RAIN_” into large walkie-talkies. That was sweet.

Last and very much least on the OST is Mutemath**’s re-imagining of the original theme. You really wish they hadn’t. Much like this soundtrack in general.

Still, the film’s pretty good. Mike Diver had a semi all the way through. Apart from the bit about eBay. Then, he wept into a packet of wine gums.