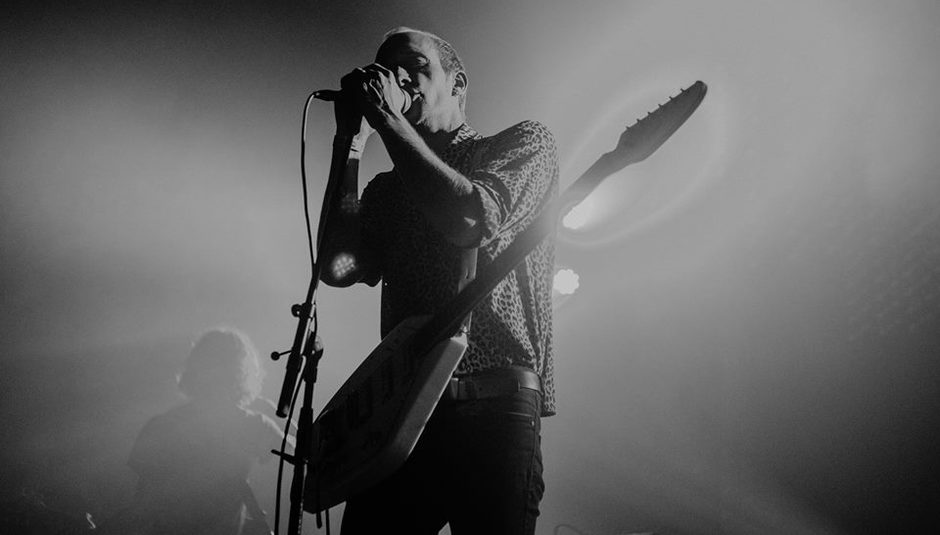 DiS is pleased to announce that we're to be media partners with Fuzz Club Eindhovenonce again, having partnered the inaugural event with them last year. Taking place at the city's legendary Effenaar venue on Friday 23rd and Saturday 24th August as part of a collaboration between the people behind Fuzz Club Records and Eindhoven Psych Lab, this year's line up promises to be every bit as spectacular as 2018's.

So without further ado, here are the first batch of announcements for Fuzz Club Eindhoven 2019. More information can be found on the official Fuzz Club Records website, while tickets can be purchased here.

This Japanese four-piece have been prominent figures on the psych rock scene since their self-titled debut landed back in 2013. Now four albums into their career, the most recent of which Masana Temples came out last year to widespread critical acclaim, they're a welcome addition to one of this summer's most exciting bills.

Four albums in and The Soft Moon's reputation continues to grow as one of the most innovative acts to emerge from the post-punk scene and its many sub-genres in recent years. Fusing any number of sounds and styles in front of a dazzling array of visuals for maximum effect, their live show is a mesmerizing collage of beauty for so many different reasons.

Their recent set at January's MENT Ljubljana showcase event in Slovenia should have allayed any doubts about Iceage once and for all. Undoubtedly on top of their game right now, their mix of post-punk, hardcore, noise and art rock should set pulses racing around the Effenaar come August.

Comparisons to Suicide and Moon Duo only tell part of the story with this two-piece. This experimental mix of electronica, post-punk, psychedelia and shoegaze brought them to the attention of Portishead's Geoff Barrow who eventually signed them to his Invada label for fourth album Mirror Being. Having put out two more long-players since then, they've firmly established themselves as one of the most popular live acts on the psychedelic rock scene and will no doubt be a huge draw here.

Highly acclaimed singer/songwriter Tess Parks has been making music for the best part of a decade, putting out her first album Blood Hot on Alan McGee's 359 label six years ago. Since then, she's gone on to release two records with The Brian Jonestown Massacre's Anton Newcombe as well as collaborate on a number of others by the likes of Velvet Morning and The Third Sound to name but two.

Having played a blistering show at this very festival in 2018, The Underground Youth are back to do it all over again this year. They'll also have a new album in tow as ninth long player Montage Images Of Lust And Fear is scheduled to drop in March. With such a vast back catalogue of material to choose from, we expect this to be another grandiose performance from the Berlin-based four-piece.

San Franciscan four-piece Lumerians have been around since the mid-2000s. Since forming they've put out five albums, the most recent of which Call Of The Void came out last year on the Fuzz Club label. Their experimental nature has led to comparisons with krautrock staples Can and Neu! as well as more avant-garde acts like Sun Ra and Sonic Youth. Expect the unexpected in Eindhoven.

The Telescopes released their eleventh album Exploding Head Syndrome last month, almost thirty years since putting out their debut Taste. As with all its predecessors, it brings a new dimension to the array of sounds and styles encapsulated throughout three decades of existence. Always an extremely intense proposition live, this booking represents something of a major coup for Fuzz Club Eindhoven.

With seven albums' worth of material to choose from, The Warlocks have a catalogue worthy of headline status. Ever since forming the band back in 1998, songwriter and multi-instrumentalist Bobby Hecksher has continued to push the boundaries with every subsequent release, each one taking one step further towards ensuring his band's reverential status in the psychedelic rock scene.

New York-based duo The Vacant Lots have been an established name on the psych rock scene a while, having formed nine years ago in their native Burlington. Since then, they've put out a number of singles and EPs as well as two well-received long players so their addition to this summer's Fuzz Club Eindhoven should go down well with all and sundry.

Hailing from Brussels with a penchant for angular post-punk as well as ear-splitting noise rock, Whispering Sons are one of the most exciting guitar bands on the European circuit right now. Debut album Image came out at the back end of last year and they've been on the road pretty much ever since. Musically their appeal spreads far and wide, with fans of old school progressive punk bands like The Damned and The Chameleons just as likely to be as invigorated as those indebted to new architects of noise such as The Soft Moon or A Place To Bury Strangers.

This Dutch four-piece have been causing a stir in their native Netherlands for a while now having originally formed back in 2013. Debut album The First Stirrings Of Hideous Insect Life came out to widespread critical acclaim four years later, but it's in the flesh where Iguana Death Cult really come alive.

This Japanese trio have been blowing minds since their self-titled debut landed in 2015. Fuelled by a shared love German bands from the classic krautrock era and a passion for creating experimental music, last year's follow-up to their debut With Dim Light highlighted them as one of the most exciting acts on the circuit. Due in no small part to their continuous pursuit of trying to break new ground. Come August, that pleasure is all Eindhoven's.

Another band making a welcome return to Fuzz Club Eindhoven after last year's showstopping grand finale on the closing night. 10 000 Russos have earned a reputation as one of the most visually striking as well as sonically challenging live acts on the psych scene, and with new material in the pipeline, theirs is one set not to be missed.

Rendez Vous have been causing a fuss in their native Paris for a while now. Fusing elements of post-punk, coldwave and noise rock, they've often been compared to the likes of Interpol, Joy Division and The Chameleons among others. Having released a number of EPs over the past three years, they finally put out their long-awaited debut LP Superior State in September to a wave of critical acclaim.

Hailing from Santiago, Vuelveteloca emerged from the same Chilean psychedelic scene as The Holydrug Couple just over a decade ago. Now, five albums into their career, the most recent of which Sonora came out on Fuzz Club back in 2017. Making a rare visit to Europe, their potent fusion of kraut, stoner and psych rock should go down a treat here.

Having performed at the inaugural Fuzz Club Eindhoven event in 2018, this Berlin-based South African duo are back for the second year running. Musically not too dissimilar to acts like Mazzy Star, The Velvet Underground or Spiritualized, their heady mix of soothing vocals and doomy arrangements provide both the uplift and comedown for a set that's not to be missed.