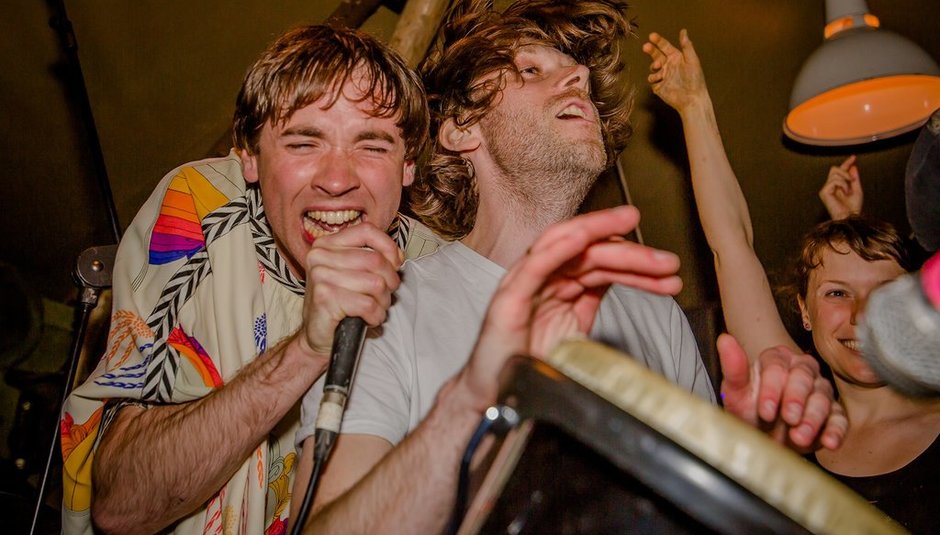 Next weekend, DiS heads to rural Cambridgeshire for this year's Secret Garden Party. Now in its twelfth year having first opened its gates in 2004, the festival takes place on the grounds of an old farmhouse which has its own lake, river, and ornately landscaped gardens. Housing twenty-five different stages and areas, Secret Garden Party has grown considerably since its first edition, with up to 26,000 people expected onsite over the course of its four days.

The event runs from Thursday 21st to Sunday 24th July, and tickets can be purchased here. In the meantime, DiS has picked out ten artists we're most looking forward to seeing over the course of the weekend.

If you weren't already aware of it, we're big fans of Amber Arcades here at Drowned In Sound; so much that we awarded their debut LP Fading Lines a perfect 10/10 recently. If you want to see what all the fuss is about (and why the hell wouldn't you?), we highly recommend catching them at one of their few UK festival dates. It will be worth the time and effort!

Another band DiS has championed right from the outset, this Nottingham duo continue to make progress with their intelligently crafted electronic orientated pop that references New Order, LCD Soundsystem, and the Pet Shop Boys among others. Saturday afternoon just got that little bit brighter.

Dan Snaith's status as something of a musical visionary becomes more firmly cemented with every subsequent Caribou release. 2010's Swim is still widely regarded as his opus, but Our Love, its successor four years later, also manages to tick all the right boxes. Secret Garden Party marks Caribou's first ever UK festival headline slot, and expectations are high.

Yet another band heavily championed on these pages from the start of this year. Fews debut album Means came out to rapturous reviews all across the board in May including an impressive 9/10 here. Live they're an even more formidable proposition, and their Sunday teatime slot bears all the hallmarks of being a highlight of the entire weekend.

South London four-piece Inheaven fuse shoegaze, grunge, and garage rock with pop sensibilities, and count Strokes frontman Julian Casablancas as one of their biggest fans. They've been on the road for the majority of 2016 and have firmly established themselves as one of the most exciting new live bands around. Expect to be blown away.

Former Racehorses frontman Meilyr Jones has been hailed as the Welsh Jarvis Cocker in some quarters, which isn't that wide of the mark. His debut album 2013 came out earlier this year on Moshi Moshi, and fully highlights his tenacity and panache when it comes to bringing together all the various elements it takes to compose a classic pop song. However, his live show is on another level entirely. Unpredictably unmissable, as his performances this summer at Focus Wales, The Great Escape, and Glastonbury have already demonstrated.

Onto another early candidate for album of the year, this time in the shape of flawless second album Suicide Songs. Money have continued where they left off after predecessor The Shadow Of Heaven. Broodingly intense and unflinchingly captivating, particularly frontman Jamie Lee, they're fast on their way to becoming one of this country's national treasures. Not to be missed under any circumstance.

This Copenhagen based duo have been honing their sound for three years culminating in 2015's impressive debut EP Medication. Echoes of bands like The War On Drugs and The National can be heard in their affluent new wave Americana tinged alt-rock. Hotly tipped to break through into mainstream territories in the none too distant future, this opportunity to catch them in more infinite confines should not be passed up.

Despite only releasing their first single 'Junk Food Forever' this time last year, Reading four-piece The Amazons have emerged as one of the most exciting outfits on the live circuit. Having amassed a loyal and dedicated fanbase in such a short space of time, their ethos is reminiscent of people like The Wonder Stuff and Kingmaker from the early 1990s, while musically comparable to fellow workaholics Spring King and Splashh. Bigger stages beckon.

Toronto four-piece Weaves are here to give traditional machismo rock & roll a kick up its complacent backside. Fusing angular new wave punk stylings with a lo-fi sensibility, their long awaited self-titled debut came out last month to glowing reviews, while in hyperactive singer Jasmyn Burke, possess an uncompromising hybrid of Poly Styrene, Karen O, and Beth Ditto within their ranks. Beat that!

Here's a 30 song playlist comprised of some of the artists playing at this year's Secret Garden Party...