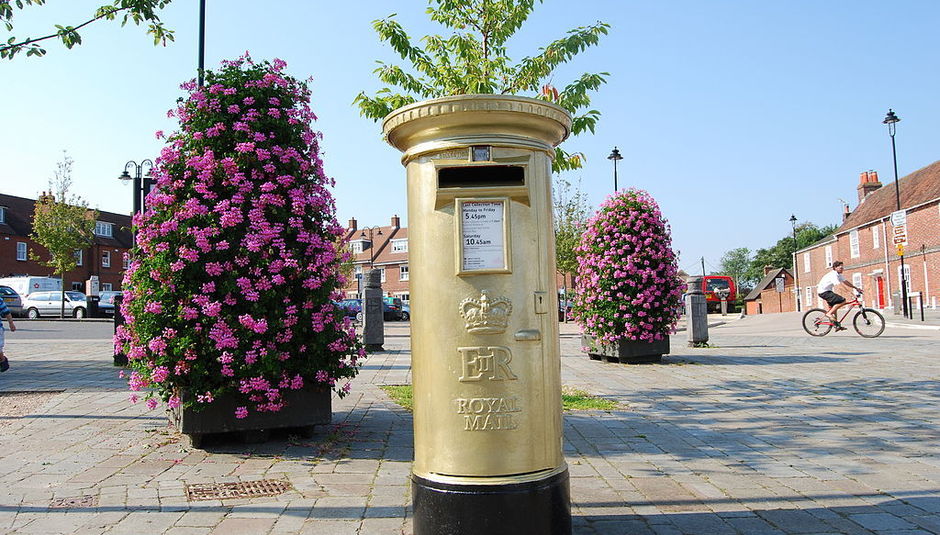 Here are the best tunes that have landed in the editor of Drowned in Sound's inbox since the last one of these a few months ago...

The above postcard was sent to me by those polite chaps from Ghosting Season as a thank you for inviting them to play at DiS' 13th Birthday party the other week. It's a sentiment I often shout, so it's nice to have it stuck to my wall to nod at occasionally. If you have the misfortune of following me on Twitter you'll probably have a fair idea that my relationship with my inbox^ is quite an unhealthy one. There's so much pouring into it that some days (500 emails a day is quite normal, 700-800 isn't unusual) it can feel like an insurmountable task to keep up, as the endless slurry of words and embed codes tumble in.

For every 1000 emails I receive there's always one good thing. In an attempt to stop throwing my hand's up in despair and to force myself to listen to more stuff, a few months ago I started this irregular Inbox Gold column. The website redesign got in the way, so you have quite a few months of emails (31,000 since August!!) reduced into a 45-minute playlist. I've thrown a small YouTube bonus playlist on the end too.

Sometimes bands contact me direct. No need for PRs or any of that crap. This chap from Sydney via LA fired an email over, and I clicked and BOOM! Some delightful melodies poured forth. Pick this up over on his BandCamp.

This hit me in a place I haven't felt music punch for quite a while. The last time a tune got me 'there' it was probably Beirut or Clap Your Hands Say Yeah. Or possibly The Shins when they went all Weezer-y on Chutes Too Narrow. It's been a while since a giddy-verging-on-proggy pop song - with scuzzy guitars and hideously happy Neutral Milk Hotel-ish vocals that have been run off the train tracks by exuberant drums and a rumbling bassline - caught me in the eye of its party storm and left me feeling full of awe and excitement. This track opens the second ARMS EP, which was out in September, and is stunning from start to finish. Arms happens to be the chap who used to be in Harlem Shakes, who were a blog-adored band back when no-one really understood what the Hype Machine was (I'm sure 99% of the world's population are still none of the wiser).

I can't begin to fathom what their name is all about, but they're Italian, so I'll let them off because I like how they sound like 65daysofstatic remixing Haim beyond recognition. There's a very 'free' attitude running through most of their music, mixing electronics with brash guitars and shoegazy vocals. Easily one of my most surprising and exciting discoveries of 2013.

I came across them at the Primavera, but not how you'd think as they weren't performing. The singer handed me something at the conference part of the festival that I was speaking and said "enjoy your trip!" I discovered in my palm what looked like a small drug bag which contained a stamp. On the reverse of the stamp was a QR code, which look me to their SoundCloud. The music was awesome. I've kept in touch with them by email ever since. More music and info over at denispanicparty.com.

They sound like the kind of band that may have imploded before I've gotten as far as posting this. Badass riffs, pounding drums and wonderfully weird Daisy Chainsaw vocals.

Love this lush/loud noisy-dreamy band so much that we've invited them to play our DiSmas party. Come join us.

Cate our features editor recommended this to me. It's super-awesome, glee-stuffed stuff. You may recognise her as the lady from Dimbleby & Capper or know her as the other half of Nigel Godrich's Ultravista project. She's got pedigree, and it won't be a surprise with tunes like this to hear her everywhere in 2014.

Catchy. Sweet. Giddy. A definite tip for 2014, especially as they've signed to Sub Pop. I interviewed one of the duo here

Much like the last two, this isn't Rainer's first time around as a buzzed up new band (let's be honest, it doesn't really matter to anyone except those gatekeepers who need fresh virginal flesh to hype, because the media has lost its ability to celebrate something simply because it's good. Hope is still very important in a world where newness is prized more than greatness... I digress!), and much like Thumpers and Femme, this means all the evolution has already taken place. It's almost as if The Knife that wrote Silent Shout made a glorious R&B record.

This took my breathe away on first, second and thirty-third listen, and all the ones in-between. Broken Twin is Majke Voss Romme, a young lady from Denmark, who recently signed to Anti- (the label which is home for Tom Waits, Wilco, etc) and is currently on tour in Europe with Daughter. That Fiona Apple quiver that Joanna Newsom borrowed lingers at the end of her voice, and she manages to write small songs which become big sky melancholy wonders - not unlike some of Sufjan's quieter moments. Definitely a debut album to look for in 2014.

Goddam you Scandi heartbreakers, do it to me every time... Our friends over at Line of Best Fit released this as a single back in September, and it's still sweeping us up to places where M83's earlier shoegazy tracks too us, and has a dash of that Scandi-magic that you hear on I Break Horses or on the sadder songs of Radio Dept.

One of the albums I'm most looking forward to hearing next year is Nadler's newie. If 'Dead City Emily' is any indication, it's going to be as beautifully bruised as everything she's done to date.

Here's a bonus YouTube playlist featuring some videos I've liked in the past few weeks:

^ = I say inbox, but quite a few of these surfaced to the top of my inbox through a new 'turn your inbox links into a playlist app' called Fluence that I've been trying out, and it has made ploughing through the overwhelming spool of streams somewhat easier to ingest.