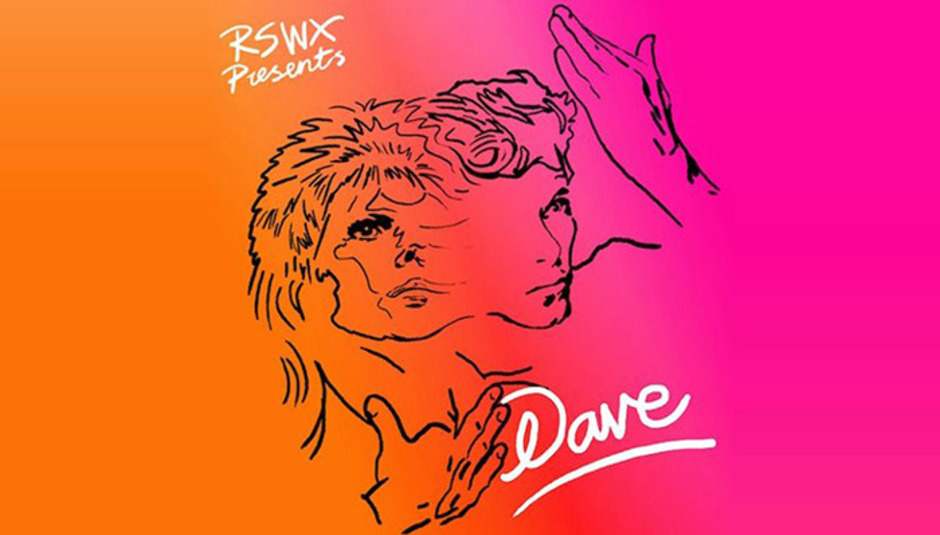 Last week, Radio Soulwax (one of Stephen and David Dewaele’s incarnations - if you’re confused about which combination’s which, they clear it up pretty well at the start of their documentary ‘Part Of The Weekend Never Dies’) released an hour long video; ‘RSWX presents Dave’, part of their eventual 24 hours of remixes to be released through their app. It’s an hour long Radio Soulwax remix of David Bowie songs, accompanied by a highly surreal film “Dave”, a sort of Bowie v1.0, who hunts down his various alter egos and shoots his album covers. Although that sounds quite straight-forward and reasonable, it certainly isn’t; much as you’d expect from anything attempting to conjure a coherent narrative from Bowie’s album covers, it’s pretty freaky.

I was first sent the link by a friend, who acknowledged the extent of my Bowie mania and propensity to over-react to supposedly good covers by tentatively stating that he wasn’t sure if it was genius or heresy. Stay calm my fellow obsess-ees, of course the mixing is sublime – this is Soulwax we’re dealing with. The remix itself is essentially a showcasing of Bowie’s vocals, often stripping away everything else and letting the lyrics and melody speak for themselves. From the audible smile in his voice as he sings ‘Kooks’, to the velvet wealth of ‘Let’s Dance’ or the slight quake in ‘Five Years’, hearing the classics reduced down to their essence is humbling and made me listen closer than I had in years. Often, the mixing is little more than a seamless transition between songs (no mean feat when you consider the sheer diversity of the Thin White one’s output), but there are moments when the brothers Dewaele simply can’t help themselves. There’s a gorgeous little jam off the ‘Rebel Rebel’ riff, and some seriously spooky synths lurking beneath ‘Space Oddity’, which then gently, and mindbendingly, fades into “Ragazzo solo, ragazza sola” – Bowie’s subsequent Italian version of the same song. Similarly, ‘Ziggy Stardust’ is pitchbent under RSWX’s loving touch, then fades into an acoustic version. As the blurb comments, it’s a collection of “all things Bowie”, with originals, covers, backing vocals and reworks all beautifully fitted together.

The visual accompaniment is no less impressive. Wim Reygaert, who shot the app’s first film, ‘Into The Vortex’, guides us through the life and times of Bowie, squeezing in his collaborations with Iggy, Lou and Queen, his acting career, and his time in Berlin amongst much else. With its infinite corridors, exploding noir detectives and backwards clocks, the whole thing is feverishly dreamlike and distinctly Kafkaesque. “Dave”, the “original” Bowie, travels through time, finding and confronting his various selves, alter egos and personalities. With a repeated motif of selecting one of his ID’s, it’s a Bowie who is facing all of himself, in the words of Soulwax “changing whilst remaining himself”. It brings to mind Todd Heynes’ Dylan biopic ‘I’m Not There’; a complex homage to a many faceted musician. In both cases, the male lead is played by a woman – Cate Blanchett’s weirdly attractive Dylan is not far from Hannelore Knuts’ portrayal of Bowie’s fragile, cutting cheekbone androgyny. Both Dylan and Bowie are notoriously media-savvy, which allows these unconventional interpretations offer an unusually deep insight; a stylised version of the mysterious reality.

There seems to be something about Bowie that invites tributes and homages; from Flight of the Conchords to the BBC’s Life On Mars and Ashes to Ashes shows, it seems that there’s something in Bowie’s art school, self-invention vibe that inspires others to riff on his various incarnations. I don’t really believe that anyone ever forgets the genius of David Bowie – but if you somehow had, this would be the perfect way to reignite your enthusiasm once and for all. Perhaps I can’t be objective though; I once made a friend of mine lie on the floor in the dark and listen to ‘Sound and Vision’ when she said she hadn’t heard of Bowie.

My only complaint is this “Dave” business. On what possible level is David Bowie a Dave?