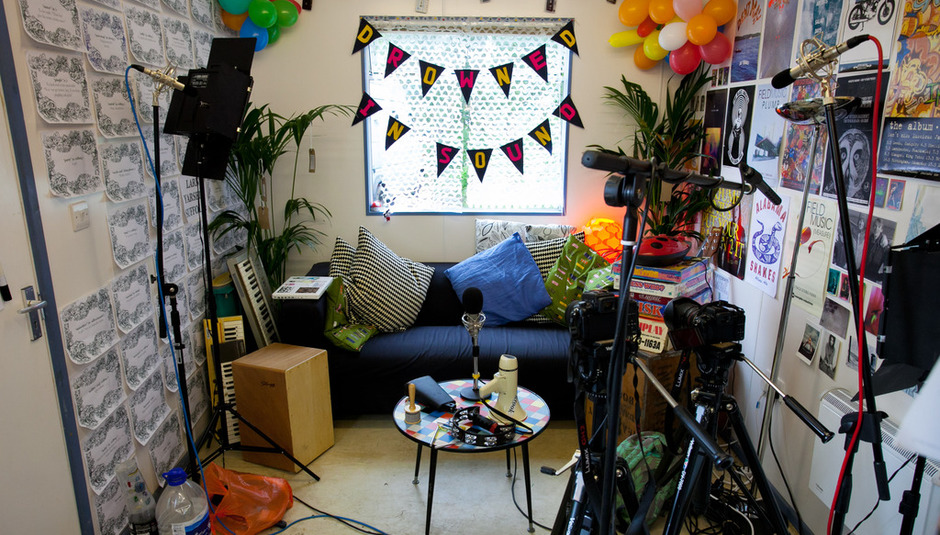 This year, DiS was an official media partner at Latitude Festival. What this meant, is that we got a portakabin in back of the Lake Stage, and spent all weekend luring bands to it with the promise of a bacon and cheese toastie, a game of RISK, or an opportunity to learn How To Speak Suffolk Proper. Fun was had. Inappropriate jokes were told by Josh T Pearson. Haribo marriages were proposed to Sharon Van Etten.

This is what it looked like... and this is how it sounded when we filled it with brilliant musicians...

Live Session: Sharon Van Etten - 'All I Can'

Sharon Van Etten didn't need to sing to heal the hearts, vodka-broken brains of DiS when we saw her open the Word stage on Saturday morning. She just said the word 'tow truck' and smiled, before I basically wanted to rugby tackle her. Later in the day she came to the DiS cabin, expressed a fondness for Haribo fried eggs and then was kind enough to let us choose what she sang. We chose 'Leonard' and this, 'All I Can'. If the awed silence after she'd finished playing had had a voice, it would have said 'We can go home happy now.' Later, in the woods, someone said 'I'm not sure she realises just how amazing she is.' And maybe that's what's so impressive, she is guileless.

Joseph Mount and Olugbenga from Metronomy popped in to talk to Sean about their live show, writing in Paris, crappy festival weather, not really being arsed to see Lana Del Rey (mud), and whether Norfolk has BEEF with Devon. On behalf of Norfolk I would like to say: we East Anglian separatist outlaws don't care what The Rest Of Youse get up to.

It's funny how Josh T Pearson can have unforgiveable artwork on which a lady has forgotten her top; and how he can tell some of the most disgusting jokes you will ever hear. But when all six foot something of his Texan frame is stood right in front of you - especially when he is wearing a belt buckle that has curly ram's horns [um, where are you meant to look?], and then he is taking your hand and looking into your eyes and asking your name; and then he is telling you what a pretty smile you have, and all you want to do is run away and join the circus. Such charisma! What a dreadful, brilliant cad.

Yeasayer's bassist Ira Wolf Tuton dropped by the DiS cabin at Latitude Festival 2012 to lean his magnificent form against my shonky home-made cushions. He also did an in-depth Show & Tell with Sean about his Industrial Radio Midi Bass, and talked about the bands' live shows and their forthcoming album 'Fragrant World'. Lovely chap.

In which Josh T Pearson gamely stepped in to ask Craig and Peter the questions that mere mortal journalists are not allowed to posit. Not least: 'How much are you getting paid to headline?' To be fair, Elbow had quite a lot of fireworks to pay for. Can you spot the teeny tiny, felt em-jay pinned to our curtains?

Squeezing five Belgian art rock men into a tiny portakabin and asking them to play ancient casios usually used to teach music students how to be ROCK was rather marvellous. They also played 'Instant Street' which you can watch here or hear on SoundCloud here.

Interview: Darby Cicci from The Antlers in conversation with Dom Gourlay

In which Darby talks about perfect the festival line-up, the critical reception to 'Burst Apart', the 'Undersea' EP and what might be next for the band. Later on he did a Show & Tell on the swizzy modular synth you can see on the table. You can see that on our YouTube channel shortly.

Mike Hadreas dropped by for a chat with Sean before his performance. We asked if he might sing us a song and he graciously accepted, playing this Madonna cover. Video footage of this, plus our interview will be up here soon. He also signed a poster, which you can have FOR FREE if you send the best and most charming email to latitude at drownedinsound dot com.

Sound Engineers: Ryan Hillier, Lauren Hichisson, Tom Joy & Sam Thompson, from Access to Music Norwich where you can go if you think having me as a mentor would be 'a good idea'. All four of these people are AMAZING, feel free to give them JOBS.

Filming & Editing: Absurd, embarrassing thanks to Luqman Heron and Ahmed Peerbux from C Media, who filmed and edited all our interviews and live sessions. Do feel free to hire these GOOD PEOPLE.

All photos by Ben Carpenter.