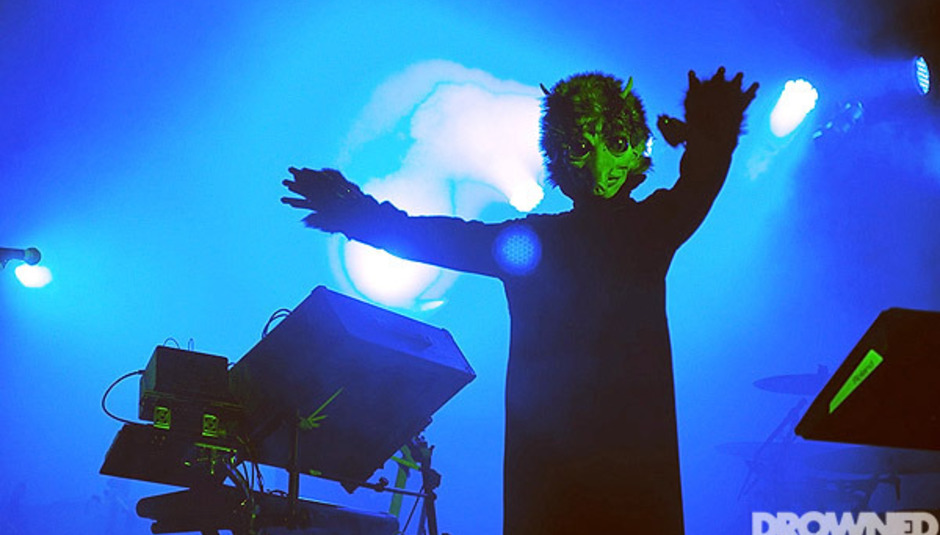 Catherine A.D.
Playing at the ungodly hour of 11am on a Sunday morning while entering to a soundtrack of Radiohead and Oasis would have proved a soul destroying exercise for many. Not Catherine A.D. however. Complete with her perma-smiling backing band, not even the late intervention of the I Arena's stage manager halfway through demanding she cut her already short set even shorter dampened their spirits. 'Over And Over', influenced by Rufus Wainwright touched the sympathetic heartstrings while a rousing cover of Lady Gaga's 'Telephone' followed by a dramatic run through 'Long Year' emphasised her exquisite talents, while posing the age-old question "Why isn't she higher up the bill?" Maybe next year...
Dom Gourlay

Gross Magic
Following on from what seems like a never ending production line of bands indebted to Dinosaur Jr and Nirvana meet the latest incumbents, Gross Magic. Hailing from Brighton and technically the solo project of one Sam McGarrigle. Here, playing as a four-piece on the sidelined Lake Stage their mid-afternoon set is pleasant enough if slightly underwhelming. Having wowed us at The Great Escape two months ago playing in a tiny hotel basement, their slacker-goes-glam schtick seems lost in the ether here, although grungey highlight 'Sweetest Touch' evidently proves McGarrigle and Gross Magic could be ones to watch out for in the not too distant future.
Dom Gourlay

Simple Minds
Although often languishing in the shadow of U2 first time around, Simple Minds actually recorded a batch of amazing records. Many of them before enjoying commercial success. It's to their credit then that rather than take the easy option and just play "the hits", they instead deliver a set weighted towards the early part of their career. While opening with 'Waterfront' and ending on 'Alive & Kicking', a rousing 'Don't You Forget About Me' squeezed delicately in the middle, it was the inclusion of lesser known material like 'Love Song', 'Someone Somewhere In Summertime', 'The American' and 'I Travel' that raised the most cheers. Vocalist Jim Kerr still the supreme showman after thirty-five years in the game, and even though big sellers from their back catalogue such as 'Promised You A Miracle', 'Glittering Prize' and 'Belfast Child' didn't make an appearance, both band and audience seemed to be enjoying themselves immensely. While Kerr looks as if he hasn't aged a day since the hedonistic era of the 1980s, guitarist Charlie Burchill is a doppelganger for Charlie Sheen, albeit a slightly more rotund version. Timeless.
Dom Gourlay

M83
Entering the stage wearing a green face mask while dressed in a long black cloak, any accusation that Anthony Gonzalez and M83 are just another faceless techno act really must be reconsidered. And some. Arriving nearly ten minutes later than scheduled due to the ongoing technical difficulties that curtailed Battles set beforehand, Gonzalez and his band are simply a revelation. Despite the uncharacteristic stage time of 7pm on a Sunday evening, the next forty minutes act as nothing short of a euphoric reminder just what a life-affirming experience an M83 concert can be. 'Teen Angst' and 'Reunion' rolled out early, both incendiary highlights paving the way for what follows, it's a celebratory 'We Own The Sky' and ecstatic climax of 'Coleurs' that take our brains and dance manoeuvres to another dimension. Who needs drugs when the music's this good?
Dom Gourlay

Perfume Genius
Having delighted those present in the DiS portacabin some three hours earlier with an impromptu Madonna cover, Mike Hadreas' aka Perfume Genius troubled laments offer a soothing if sorrow filled wake up call as this long weekend draws to a close. Complete with full band, his set draws from both Put Your Back N 2 It and its predecessor Learning, newer material such as 'AWOL Marine' and 'Hood' blending effortlessly with old favourites 'When' and 'Mr Peterson', while the haunting 'Sister Song' melts several hundred tear ducts, so frank yet ebullient is its delivery. Random chatterboxes are shushed in an instant until only the sound of a pin dropping to the ground can be heard. But then that's the way it should be for such moments of elegant beauty as this.
Dom Gourlay

Wild Beasts
Yes, you all know the drill by now and probably the set from back to front too, but boy, what a set. For a band who've seemingly spent the best part of four years on the road - indeed this is their fifth appearance at Latitude, something of a record for any one particular band we suspect? As with their recent set at Primavera, it's a case of business as usual but when that business is as exemplary as this, why change things around for the sake of it? 'Bed Of Nails', 'We Still Got The Taste Dancin' On Our Tongues', 'The Devil's Crayon', 'Reach A Bit Further', 'All The Kings Men', we could go on and list the entire set. Each and every one of the eleven songs they play being simply flawless, culminating in the now familiar epic strains of 'End Come Too Soon', which in this case it does as Wild Beasts really are one of those bands DiS could listen to repeatedly for hours on end and never get bored.
Dom Gourlay

John Cooper Clarke
Latitude 2012 drawing to a close, what better way to finish off than an hour long verbal assault courtesy of Manchester's finest "punk poet" John Cooper Clarke. For those unaware of his existence and borderline legendary status, cast your mind back to the second episode of The Sopranos sixth season or the film Control and you'll perhaps remember 'Evidently Chickentown', his expletive ridden diatribe which ends tonight's hilariously un-PC performance. In between favourites like 'Beasley Street' he delivers a rhyme about sexually transmitted diseases ('Lydia'), has a rant about prisons and Terry Pratchett while telling gags like this one ("What's the difference between a Lada and a Jehovah's Witness? You can close the door on a Jehovah's Witness") that probably first saw the light of day at the beginning of the 1980s. And yet, in a similar way to Mark E Smith, he goes down a storm, bringing the curtain down on this year's festival in the most spectacularly profane way possible.
Dom Gourlay