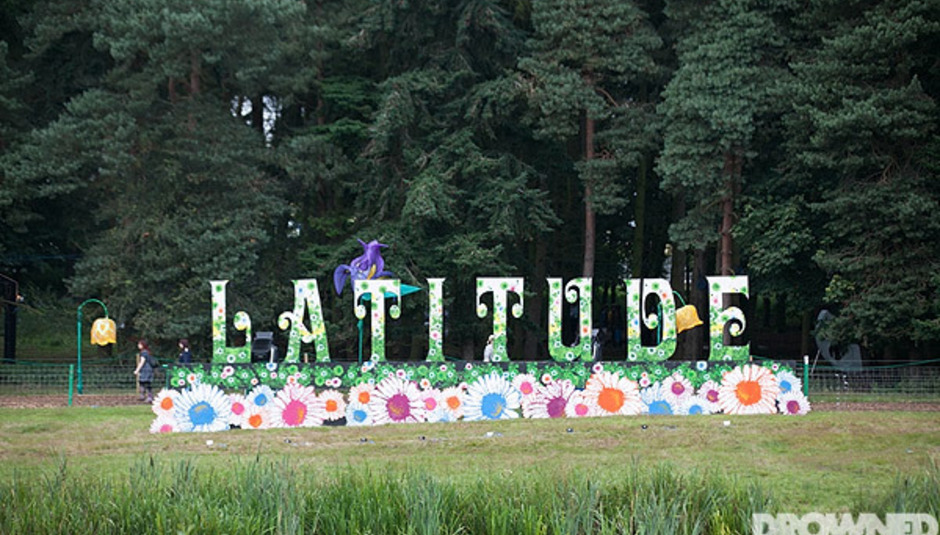 It may have rained all day and most of last night here in not-so-sunny Suffolk, but that didn't dampen Drowned In Sound's collective spirits. Here with the highs and lows of Saturday's busy schedule at Latitude festival, Andrzej Lukowski and Dom Gourlay relive their best and worst moments from day two.

Deap Vally
Hotly tipped Californian duo Deap Vally draw a large crowd to the I Arena in the early afternoon. Although still only early days in their fledgling career, its easy to see why they're courting so much attention at present. Pleasing on the eye and distinctive of voice, Lindsey Troy's howling rasp not too dissimilar to a young Janis Joplin. However, after a while their blues-tinged garage racket starts to drag a little, following in the footsteps of kindred spirits The Kills and Band Of Skulls without ever reaching the dizzy heights of either. Still, its early days yet so perhaps a little premature to dismiss them as also-rans at such an infant stage.
Dom Gourlay

Lianne La Havas
With no new Adele record in the pipeline for the foreseeable future the smart money is on Lianne La Havas to fill the void. Most of Latitude seems to think so too, as the queues from the packed Word Arena stretch far and wide beyond every exit. Pleasant, but hardly awe inspiring either, La Havas is obviously a precocious young talent but the question is how and where will that talent be nurtured? Because on this afternoon's evidence, there's little substance to match the sheen. File under Eliza Doolittle, if anyone still remembers her that is...
Dom Gourlay

Josh T Pearson
If ever Josh T Pearson decides to take a break from making music, his next career move would surely belong in the world of stand-up comedy. Announcing his arrival with "Hi, I'm Josh T Pearson and I'm here to poop your party" before cracking jokes about blowjobs and goats then tuning up his guitar only to turn to the audience with the immortal line, "That was my first song; it's called 'Soundcheck'!" All this before he's even played a note of his short (by his standards) forty minutes set. When those songs do arrive such as the delectable 'Sweetheart I Ain't Your Christ' and cathartic 'Woman When I've Raised Hell', he becomes a one-man heartbreak messiah. Afterwards DiS invites him to interview two members from Elbow. The outcome has to be seen to be believed.
Dom Gourlay

Wooden Shjips
San Francisco's Wooden Shjips might look like ZZ Top, but their psychedelic dronerock acts as a natural successor to Spacemen 3 or Loop's visceral fug. Noise constraints hamper their sonic attack slightly, Ripley Johnson's guitar seemingly too low in the mix. Nevertheless, 'We Ask You To Ride' and 'Black Smoke Rise' create a hypnotic groove that's difficult to shake off, even when they exit the stage just thirty minutes later.
Dom Gourlay

I Break Horses
Having only become a proper touring band several months ago, I Break Horses have developed at a rate of knots into the irresistable force that owns the I Arena until Shy FX's colossal drum and bass set in the small hours. Singer and principal songwriter Maria Linden is the focal point, her soothing vocal cushioning the incendiary wall of sound playing all around her. 'Hearts' reminds us why we fell in love with Curve many moons ago, while the building synths and crushing beats that bring 'Winter Beats' and the set to a close has a similar euphoric impact to that of a DJ dropping his hardest, heaviest tune to 50,000 ravers in a warehouse. Short but sweet, yet utterly mesmerising.
Dom Gourlay

The Horrors
What else is there to say about The Horrors other than they're not only the most improved band in the UK these past five years, but they've also established themselves as arguably the most captivating live band on these shores too. Playing a now familiar set drawing on a 50-50 split of material from Primary Colours and Skying, Faris Badwan and co. justify their Word Arena headline status and some. The likes of 'Sea Within A Sea', 'Endless Blue' or 'Still Life' improve rather than tire with age, while if there's a more fitting climax to be had anywhere than the epic near fifteen minutes run through 'Moving Further Away' prior to their departure I've yet to witness it. Main stage headliners in the not too distant future? Why not.
Dom Gourlay

Shy FX
As a veteran of the drum and bass scene of the early nineties, Andre Williams aka Shy FX needs no introduction. Playing a mammoth ninety-minute set in the early hours of Sunday morning to a rabid throng, the over-populated I Arena literally bursting at the seams, his repertoire mixing his own material - the biggest cheer of the night unsurprisingly reserved for 'Original Nuttah' with classic staples of the ska and jungle scenes - M Beat & General Levy's 'Incredible' and The Specials 'A Message To You Rudy' proving particularly popular. We danced away the rainclouds until our tired feet couldn't move any more. Bring on Sunday..!
Dom Gourlay