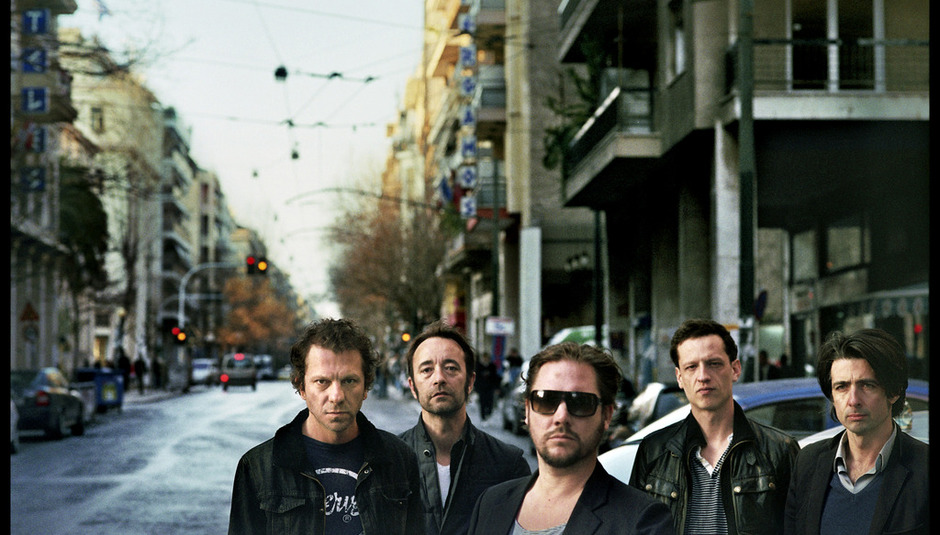 Art-rockers dEUS need little introduction to the DiS hardcore. They're essentially the Belgian Sonic Youth, yet don't seem to have ever had that moment which stitches them into the fabric of 'indie' history. You may have already heard their odd-party anthems or cinematic rhythms and not even known it, but it's cool, as now is the perfect time to fall in love with this exceptional band.

DiS is very proud and thrilled to be premiering dEUS' new album which they've slipped out today... Yes, it is OUT NOW! And available from deus.be. As Tom Barman explains:

"We had songs we didn’t want to lose, didn’t want to have sat on a shelf for four years so we decided to break our previous way of working and be less precious and finish the songs quickly and then release them to the public. It’s 2012 for fuck’s sake, the idea of waiting months to release stuff seems so old fashioned."

Sadly this stream was only available for a limited time, check back soon and we'll link you to Spotify or something.

And now watch Tom Barman's track-by-track guide to the album where he says things like "this is a very Antwerp kind of song...it's a song about how modern life can be completely absurd..."

Oh and this is what the cover looks like... And here's the video for the new single 'Quatre Mains'...

Tom Barman from dEUS talks exclusively to Drowned in Sound about the new video, Quatre Mains:

'Diamonds on my windshield, tears from heaven'. He was right but we didn't have a budget for a raining-machine and it never rains in Belgium so. I was going to use my Peugeot 504 for the shoot but I hit the side of my garage. So we got another one and i'm glad it's in.

We made a Polish girl speak Russian. It's complicated. I'm sure it will piss some native Russians off. Again the budget. The scenes in the hangar, the pushing of the trolly, were, unconsciously inspired by the paintings and videos of Michaël Borremans, who did the artwork of Vantage Point.

Airhockey is something I loved playing in seedy lunaparks at the Belgian coast. My favorite moments were always when the disc got airborne. My sister hated that.

We used the object on the cover of Electric Light Orchestra's Discovery as an example for the air-hockey disc. The colours are also reminiscent of the electronic 80s game called Simon. A memory exercise.

The sheep were easy to work with. Easier then Sam Lowyck who was two hours late for the shoot. To get the sheep to look into the camera, our drummer Steph made sheep-noises. They responded well to that. I have no clue what they were talking about but Steph has earned eternal respect from the crew, the extras, the members of the band and the sheep.

Pick up your copy of dEUS' record from http://deus.be.