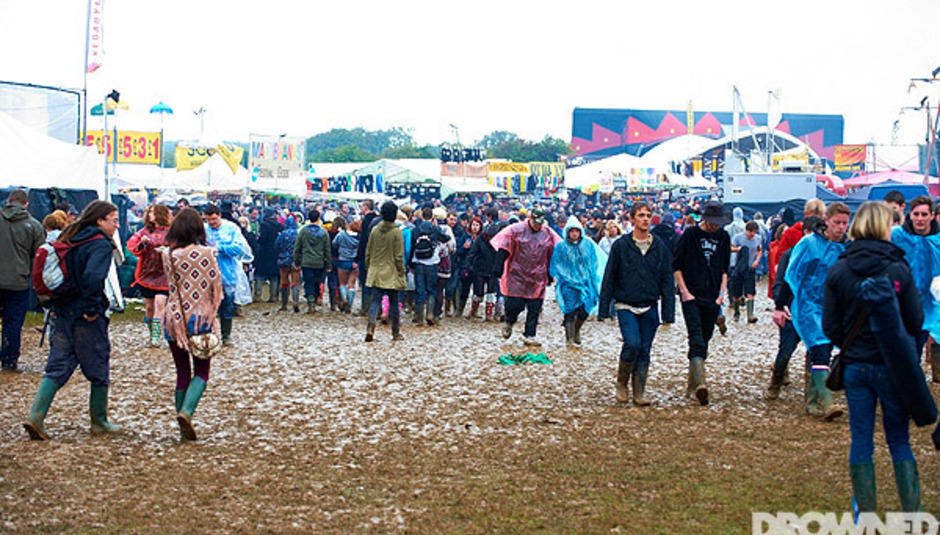 With Drowned In Sound's esteemed editor taking a break from Reading this year, he left it to four of his Northern-based chaps to take on the Leeds leg of the weekender. Full review will follow in the week, but here Simon Jay Catling, Dom Gourlay and Daniel O'Dell run the rule over the first day's highlights at Bramham Park. Meanwhile, you'll find Gary Wolstenholme's photos of Muse, Warpaint and more over this'a way

NME/Radio 1 Stage, 12:45pm
Is anyone ever surprised at Damian Abraham’s (rarely) on stage antics these days? Not really, but then that doesn’t make them any less enjoyable, and Lord knows Leeds needs it as the rain teems down on a first day that’s seemingly lacking any sort of enthusiasm at all.
No-one’s told the Toronto hardcore group that rain = grim spirits though, and Pink Eye launches himself, both figuratively and literally, into a set that galvanises a packed rain-avoiding crowd. Eventually finishing up at the barrier that separates the front crowd from back, the larger than life front man is in absolute element, refusing to let his audience rest while his band plug along furiously behind him on stage. For those who’ve seen Fucked Up this year (and you’ve had plenty of chance to) this set offers nothing new, but by God there couldn’t have been a better picked early afternoon pick-me-up. By Simon Jay Catling NME/Radio 1 Stage, 1:35pm
Beth Cosentino (pictured, above) may be better known as Mrs Nathan Williams these days, yet to dismiss her Best Coast alter ego would be nothing short of perilous. Playing at the witching hour of 1:30pm while most people are still arriving, her cool-as-ice set of Californian surf pop meets C86 era tweeness makes for a welcome respite from the 2001-orientated fare on offer for most of this rain-sodden weekend. I could talk about the inquisitive shyness of ‘Boyfriend’ or diminutive thrust of ‘Summer Mood’ but that would be like listing Best Coast’s entire catalogue, which I’m not going to do, so there. By Dom Gourlay

Festival Republic Stage, 2:15pm
We always knew that Dutch Uncles had tunes, pitching themselves somewhere around the Cardiacs quirk of late 80s new-wave and mixing into that, erm, the equally quirky British pop that Wild Beasts and Metronomy are making currently making a real impact with. Today though they show they really have balls as well; often timid on stage in the past, with vocalist Duncan Wallis’ oddball dancing seemingly the result of nerve-induced twitching as opposed to a sense of rhythm, they stride onto the stage with disarming confidence, taking off with a storming ‘Cadenza’ and even resolutely ploughing on through into ‘OCDUC’ despite a guitar amp failure. What’s changed on stage is that, having in the past stood back shyly and let Duncan let out his more extroverted anxiety, the rest of the band join him in hip shaking fluidity which, combined with their restless Wurlitzer hooks, makes for a fizzing package of guitar-pop excellence. By Simon Jay Catling

Festival Republic Stage, 3:45pm
Hailing from just up the road in York, Benjamin Francis Leftwich is greeted onto the Festival Republic stage by a full capacity tent with many seeking shelter from the rain. In the right setting, Ben's songs can be like a hot toddy - warm and soothing, but nevertheless wet, and the lone acoustic performance struggles to grab the attention of large pockets of the crowd. He ends on latest single 'Atlas Hands' which receives the strongest reaction, but its delicate tenderness requires a more intimate venue. By Daniel O’Dell

NME/Radio 1 Stage, 4:25pm
It’s difficult to find an appropriate place to start with Warpaint. The naysayers would probably point to the Hollywood upbringings and celebrity boyfriends yet cut through all the bullshit and only a deaf, dumb and blind kid could fail to realise they’re developing into an exceptional live band. Having had to grow up in public this past twelve months amidst a plethora of hype and expectation, the four girls have blossomed into one of the most engrossing spectacles currently gracing the live circuit. Sure, their large crowd in the NME sponsored tent is bolstered this afternoon by the torrential downpour outside but the flailing limbs on and off stage for the forty-five minute duration of their set tells its own story. Oh, and kudos to their deliciously orchestrated cover of The Supremes ‘My Guy’, so good and indefinably unique that it takes us a full two minutes to realise what it is. By Dom Gourlay

Main Stage, 6:00pm
Call me a sycophant if you want but any band capable of delivering the masterpiece that is Turn On The Bright Lights against a tidal wave of badly constructed metal and synapse shrinking acoustic dullness deserves to be held in high esteem until kingdom come. Sure, they’ve gradually deteriorated with each subsequent release but then how do you follow perfection? Exactly, and as a live band they’re still an excitingly muscle tight proposition. With only fifty minutes to squeeze at least two hours worth of killer material in, there are always going to be those left disappointed, but tonight we get ‘Obstacle 1’, ‘Narc’, ‘Mammoth’ and a phenomenal rendition of ‘Lights’ amongst a very fan-friendly set that sets the tone for the exhibition in excellence that follows. It’s just a shame fewer than one twentieth of the site’s overall capacity bother turning up to see it. By Dom Gourlay NME/Radio 1 Stage, 6:35pm
In which Sebastien Grainger looks utterly delighted that the Canadian duo are back on stage together again, and Jesse F. Keeler (pictured, above)? Well, he’s not looking like the chirpiest of folk right about now. Setting himself up about as far away from his partner without falling off into the wings, the sullen bassist gradually warms to a set that offers nothing new – as attendees at the group’s Spring Forum shows would expect – but still reminds us of the rarefied fusion the two possess when combined. Perhaps the most poignant thing to note from this thirty five minute maelstrom of noise is that it bears semblance to many, many a-two-piece who’ve followed in just the five years they’ve been away. Though it’s the quality of their songs rather than the coherence of character that makes them a success this evening, it’s a relief to see that a duo who’ve inspired so many that can still keep themselves at the top of the pack. By Simon Jay Catling

Main Stage, 7:20pm
What strikes about this Elbow performance isn’t the songs, really – a procession of songs largely extracted from this year’s Build A Rocket Boys! and 2008’s The Seldom Seen Kid. It’s more the fact that, like Interpol before them, there’s hardly anyone here to see it, and those that are seem decidedly subdued. While the bad weather has probably accounted for more than a few staying in their tents, the contrast between TV pictures at Glastonbury showing the Salford group strolling around a victory lap in front of almost 90,000 people to here – where at one point confused lead singer Guy Garvey has to ask “are you awake Leeds!?” – is stark. In truth this is the first time we’ve seen the band have to really work live in quite some time, and not even their failproof of ‘One Day Like This’ really manages to cut through the apathy, the whole thing falling oddly flat. By Simon Jay Catling

NME/Radio 1 Stage, 10:10pm
The typically charismatic Pete Doherty was uncharacteristically quiet as he played through a set compromising of material from across all of his musical aliases. Limited to just his acoustic, Doherty toyed with pace of several Libertines favourites including 'Time For Heroes' and 'What A Waster.' Oddly the set was peppered with the appearances of two dancing ballerinas, perhaps to detract from the clumsy guitar. Running slightly longer than anticipated he ended with a cover of Amy Winehouse's 'Tears Dry On Their Own' and long time favourite 'Fuck Forever.' By Daniel O'Dell

Main Stage, 9:30pm
I was 13 when Origin Of Symmetry came out; an impressionable time in any young chap’s life, it’s mix of metal bombast, classical piano and Matt Bellamy’s cut throat falsetto was not only a visceral listening experience in its own right, but it turned me onto so much more outside of its warped space metal. I certainly wasn’t alone in despairing as the Teignmouth trio started moving further and further away from this fire and brimstone approach, towards the caricatured version that now sells out Wembley and invites The Edge on stage. Tonight feels – for the “old timers” – a chance to remember Muse as how they were, a last party with a band we grew up with before finally releasing them to the Radio 1 listening hordes. Those hordes are here in force tonight, a sense of puzzlement greeting tracks like ‘Screenager’ and ‘Darkshines,’ whereas the God awful ‘Undisclosed Desires’ gets a massive reception. Never mind though, because for the first hour of this show, Muse put on the most energised performance seen in over five years, Dom Howard and Chris Wolstenholme seeming reinvigorated by the carnage they can unleash over Origin Of Symmetry’s eleven tracks. Even coming on to Tom Waits’ ‘What’s He Building In There?,’ a staple introduction to their shows back in 2001, this feels like a glorious reminder of the youthful exuberance that they once had, giant balloons drift over the crowd during ‘Plug In Baby,’ and tracks like ‘Citizen Erased’ are as gloriously overblown as anything from their last two albums – yet without any of the try-hard effort. By 'Megalomania' we’re positively breathless, this has been tremendous, and yet…

We’d not considered that they still have an hour to fill, and as 'Uprising' sees Dom Howard ordered back to a stoical, uninventive beat a sense of a new generation of Muse fans discovering the other side of a band (ridiculous considering ‘Origins…’ top 10 chart placing on its release,) they might have not heard before is replaced; the charged atmosphere gives away to the sing-and-clap radio brigade and the flickering embers of the set begin to fade. Thankfully they’ve still a couple of tricks up their sleeves; ‘Stockholm Syndrome’ remains a formidable set closer while ‘Knights Of Cydonia’ remains a prog-rock encore from the Gods. As the fireworks go off and the balls of flame explode from the stage front, Muse walk off, once again as we know them now. But for an hour or so there, they were simply untouchable. By Simon Jay Catling