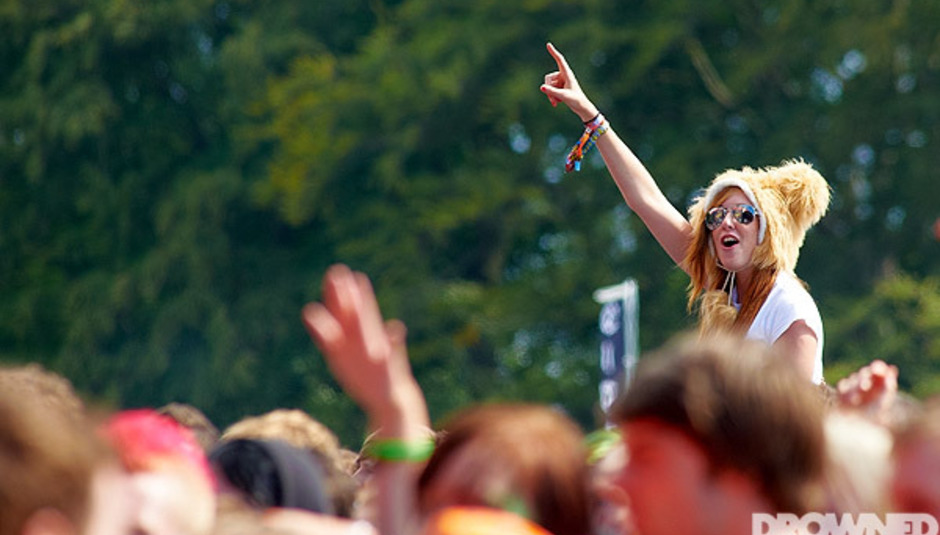 Day 2 at Leeds saw slightly sunnier climbs - only slightly mind - and, for writers Dom Gourlay and Simon Jay Catling ran rather a long way into day three. You don't want to hear of our whimsical frivolities though; joined by Daniel O'Dell here's what we saw yesterday.

NME/Radio 1 Stage, 12 noon
Be it at midnight, midday or at the earliest crack of dawn, Pulled Apart By Horses seemingly unquenchable desire to pummel and pulverise their still hungover audience holds no boundaries. Fears that placing them on a stage several feet above ground level with a chasm-like moat separating band and audience would leave them stuck in no man’s land are quickly dispelled by the time a crunching ‘Yeah Buddy’ is met with Tom Hudson diving head first – guitar and all – like an Olympic breast stroke champion into the sea of hands and bodies before him. New songs come and go, each as blisteringly excitable as the more familiar likes of ‘High Five Nose Dive Swan Dive,’ ensuring that their transition from the Festival Republic stage last year to the larger NME/Radio 1 tent passes with consummate ease. Main stage next year? Don’t bet against it… By Dom Gourlay

BBC Introducing, 12 noon
This Leeds-based six-piece fought their way onto the 2011 Leeds bill via the gamut of those most ghastly of challenges, the battle of the band contest. They must’ve made an absolute mockery of the competition there though because on this early slot at the BBC Introducing Stage they’re blowing pretty much everything else we’ve overheard on here this weekend away. Possessing collectively gruff vocals that seem to build from the pit of the stomach, roaring forth during their songs rabble rousing crescendos, this is a group who juxtapose a stiff masculinity with a heart-laid-open sort of emotional honesty. You can probably point to Wild Beasts to see where they’re getting some of their sound from, bouncing bass lines providing a rhythmic escape for any overwhelmed by their heavy sincerity. In truth however Heart-Ships are a little rougher than their geographic peers, and as new bands go, they’re among the best to have trained themselves on these susceptible ears. By Simon Jay Catling

NME/Radio 1 Stage, 1:30pm
After another day of showers, Miles Kane is being rather daring sporting white trousers considering the sea of filth that the site has become. It may be down to a lack of confidence, but a lot of artists this weekend do not look like they are fully enjoying the opportunity to play infront of such large crowds - Miles however is basking in it. As he tears through songs off his recent album of 60s tinged pop-rock, his enthusiasm is warmly reciprocated by the crowd and dancing spreads to the fringes of the tent. The set climaxes with 'Come Closer' which has several thousand people happily "woahing" along in unison to the sweat drenched scouser. By Daniel O’Dell

Dance Tent, 1:50pm
Known for taking a while to get going at the best of times, an early afternoon slot in front of a hungover crowd really isn’t playing into Mount Kimbie’s hands. Their nocturnal electronica spits and bubbles with its usual slow-burning sense of pace, but unfortunately there just isn’t time for the London duo to truly come into their own, and neither they or the audience leave the Dance Tent really feeling any better for the experience. By Simon Jay Catling

Festival Republic Stage, 3pm
For anyone new to Dry the River, watching several heavily tattooed chaps appear onstage, they may have been pleasantly surprised by the noises produced. The band have taken the folk sound currently very popular and made it into something much more appealing with a brooding quiet and loud dynamic, unconventional structures and some bold lyrical content. 'Lion's Den' is a fine example of this, beginning gently with impeccably tight harmonies but takes a Jekyll and Hyde-esque turn and explodes into a furious wall of sound. By Daniel O’Dell

The Naked And Famous

NME/Radio 1 Stage, 3:15pm
In a few years time, as music historians are documenting the latter part of the first decade or so of the noughties, it is likely that it’ll be this sort of music that they’ll come to surmise as “landfill.” By which we mean that the first MGMT album got old quick, Empire State Of The Sun really should have paid heed to that and this … well this is the sort of iTunes pick-and-play half-arsed mashing together of 80s pop, new wave and electronic influences that forms a sound featuring all the substance of a meringue. The fact they seem to have pulled the largest crowd the NME/Radio 1 Stage has seen this weekend is, frankly, a baffling. By Simon Jay Catling Festival Republic, 3:45pm
Punk rock, so much to answer for? Well, kind of if you cite the likes of Green Day, Bowling For Soup and Blink 182 as the modern day blueprint for a genre that’s not so much become a diluted pastiche of itself but literally pissed on its own rotting corpse from the inside. Thank the lord then for Cerebral Ballzy, a band so engrained in the working class thrash core of 1981 that spawned the likes of Discharge, GBH and Amebix that it takes a quick glance at their birth certificates for the realisation to sink in they’re actually from New York’s trendy Brooklyn district rather than the Burslem suburb of Stoke-on-Trent. Singer Honor Titus is a relentless pocket dynamo bursting with an as-yet medically unidentifiable version of physical tourettes. Moshpits form and grow, people fall over in a heap, new best friends helping them to their feet. Listing the songs they gallop through in little over twenty minutes would be a pointless exercise. Instead, Cerebral Ballzy prefer the more direct option of a continual barrage that takes the meaning of visceral to another level. By Dom Gourlay

Festival Republic, 5:20pm
With each performance this year The Antlers seem to be growing more and more into their new album Burst Apart. Opening with ‘Parentheses,’ the difference between the Peter Silberman who shied his way through the bleak chill of Hospice last year and the one who puts himself about the stage this evening with a quietly confident charisma speaks volumes. These are songs that bloom outwards as opposed to Hospice’s sullen introversion, ‘French Exit’ glides along with graceful opulence, while ‘No Windows’ wafts out into the tent, a billowing dream-pop fug that occasionally allows glimpses of its twinkling infrastructure. Perhaps the best is saved till last though - ‘Putting The Dog To Sleep’ feeling in every way the heart-tugging finale that it is on record. By Simon Jay Catling Main Stage, 7:40pm
Remember cringing at the site of Michael Jackson playing the role of Jesus during the 1996 Brit Awards ceremony, only for Jarvis Cocker to jump on stage and save the day? Well, at approximately 8pm this evening Jared Leto staked his claim for most ridiculous, self-obsessed man in rock. Draped in a white robe that one of Team DiS described as looking “a bit Jesus”, he then summoned a poor unsuspecting kid from the front row on stage. To jump on a trampoline. While his band look on bemused... Excruciating to the point of anger, all of a sudden the mud-sodden bar and a warm paper cup of Gaymers seemed like the only feasible option. Death to false prophets and any wannabe messiah that treads a similar path. By Dom Gourlay

Festival Republic, 8:00pm
We miss the beginning of Tom Vek’s slot and as soon as we arrive we regret that we do; the long-departed artist feels like he’s never been away, cuts from this year’s comeback Leisure Seizure taking centre stage, his oddball pop sensibilities rising above a restless bed of driving beats. Considering the Dance Tent is located away down the other side of the site, the atmosphere in the Festival Republic Stage feels considerably more “raved up,” testament to the good British public being able to chemically destroy themselves through any weather condition, and also to Vek whose set here is great reminder as to why the blogosphere erupted upon his return earlier this year. By Simon Jay Catling

Festival Republic, 10:10pm
What is it with festival organisers and their bizarre scheduling? This is the second time this month The Horrors I have seen them suffering the misdemeanour of headlining stages far too small considering their recent surge in popularity. Undoubtedly one of the biggest alternative bands in the UK at this moment - as the recent Top 5 placing for album Skying and venue upgrades for their forthcoming October tour ably demonstrate - The Horrors could easily have filled a tent twice the size; yet they find themselves downgraded to what is essentially the festival’s third stage thanks to Beady bleedin’ Eye. Not that anyone in here would care a jot. From start to finish their bass-infused take on 1980s shoegaze and 1970s krautrock connects the entire tent in a blissful manner that’s probably most comparable with the outdoor raves Fantazia and their ilk made their forte some twenty-plus years ago. Playing material from Primary Colours and Skying, there isn’t a moment where hands aren't being waved in the air, Cheshire Cat grins spreading across several thousand faces and a general feeling of camaraderie normally witnessed at a Bar Mitzvah. Even a power cut during the final third of ‘Still Life’ can’t dampen the atmosphere. In fact, it engineered one of those “festival moments” Jo Whiley likes to tell us about on BBC2 every June, the whole tent singing the song’s chorus “When you wake up, when you wake up, you will find me” as though their lives depended on it until power and band return to finish the job. Even Faris Badwan calls this “the best crowd we’ve played to in a long time”, and for fifty magical minutes, that feeling is unanimously mutual. By Dom Gourlay