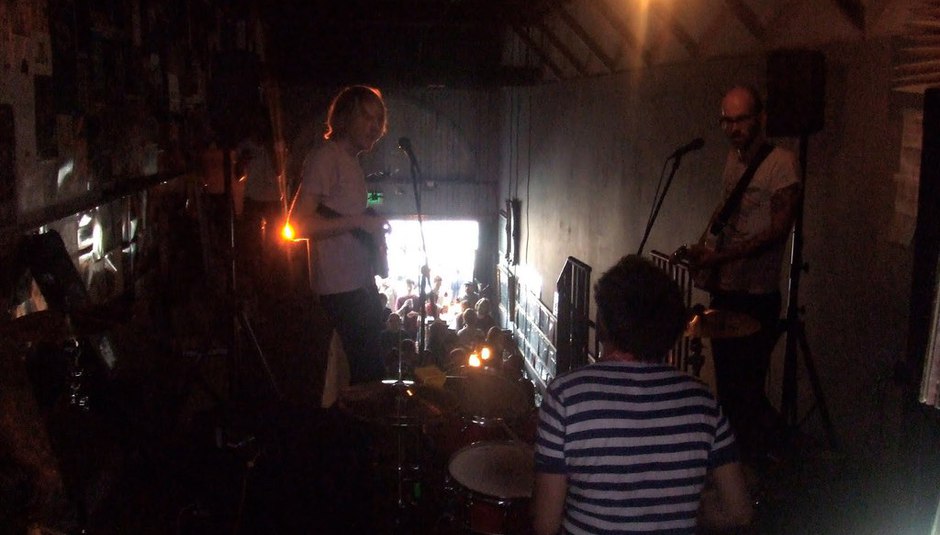 As you may have noticed, we like insights into the minds of music makers but not just that, we like to hear more about the lives and times. Tour diaries, photo-diaries and all tha' is all well and good but call us 'old skool' but we love letters and postcards from bands we love as they tour the world. In this case, we got an email from Kevin Hendrick from Male Bonding and this is what he wrote. About four hundred weeks in to our US tour. At the very end of our US tour. Our US tour, which slung us around to Canada and Mexico too. Our tour that kept us good comapny: Vivian Girls (sisters), Gun Outfit (the best band of 2010?), The Smith Westerns (sassy and rising), Dum Dum Girls (BFF), The Soft Pack (amazing men) and bunches of more incredible bands we had the luck to share shows with, like Lovvers and Abe Vigoda (remember Dallas? We lost our minds and an iPhone and a coat and tried to strip a venue of its mirrors). Aww, too much good and beautiful to write here. We really covered a lot of ground. We kept moving. All the time, moving. Transit. It makes me queasy to hear bands moan and complain about touring. I love it. Every second. Here's a word that doesn't exist in the American vocabulary: 'Winge' i.e. to winge. A British prize, that one. Our special gift to the rest of the world. Ok, so yeah, touring you just keep moving. You never stop. Ad yes I hate bands that complain and here's my only (doesn't count) complaint about touring: you don't stop enough. We pass through shockingly amazing places. We pass on through. We're climbing in to the Rockies, steering around Yellowstone Park. I just want to stop the van and run up a mountain, or jump in a cold river. Or just stop for a few minutes to breathe it all in. Who lives in those weird houses with the big Amish-style stars on the outside? I want to talk to them. I'd talk to that buffalo over there if it hadn't become a fast blur in the rear view mirror. Next stop: Somewhere-in-Montana-or-North Dakota-or Texas-or-wherever-we-are Chevron Gas Station and its travel meats. Next conversation "Where you guys from?" "London, England" "Ok, you have a nice day"
I just want to stop a little bit sometimes.
The shows rule. All of them, all in their own way. And so the tour ends in Los Angeles at The Smell. A happy ending for us as the Smell and it's consequent culture means so much to us as a band. As people. We play a fun show with Dunes , Protect Me and Back to the Future the Ride. And it's over and we're done and happy.
And in our tour bubble, so removed from everything (there's a General Election?) we were hearing volcano talk. Ash in the skies. But we didn't know.
And so. Tour is over, seven brutal weeks done. Home time. That's the other thing about touring you have yard sticks. It's an artificial world an artificial energy and along the way there are real and solid things you know to be true. The flight home is a true thing.

We're not flying home.
Stuck.
Stranded.
Of all the places in the world to be stranded Los Angeles is not a bad one. Los Angeles is heaven to hang. Los Angeles is about people. Aside to the obvious, simple givens: the sun, the BIG everythings. Your experience here is probably going to be determined by the people who keep you here. We are so lucky.
Dunes is a new band formed of members of other amazing bands (Mika Miko/Talbot Tagora/Finally Punk). Dunes is Steph, Mark and Kate. Dunes all live together with Brian who plays stand up drums in The Soft Pack. Brian is a beautiful person. Steph, Mark, Kate and Brian are the ultimate most beautiful combo of people you are ever going to meet. Good job as we're on their floor and sofa till we-don't-know-when. Photo of Dunes by male bonding

So what to do? Winge a bit. Let us winge for a few minutes. We're allowed. British perogative. It's raining too. It's raining in LA. Is it for us?
Ok, done winge-ing. Sun is up and there's hummingbirds at the window. What to do? Make a video? Yes let's make a video. For our song 'Years Not Long'. We're gonna do it with Vice Cooler (Hawnay Troof, The Raincoats, XBXRX etc.). We all just decided to do that. Upside down frowns etc. But before that we go see XBXRX at Pehrspace. Another great Los Angeles DIY space. More art gallery space than the true grit of the Smell. It's great. It turns in to a parking lot party till we turn in. Next night is a night in and is life changing. Through the smoke we watch 'The Room' directed by Tommy Wiseau. You probably know about this film. If you don't then please do. It's too amazing for words. Still reeling from the DVD we realise that it's showing at a cinema on the Sunset Strip. We're there, and we are in line with hundreds of other freaks, creeps and weirdos. Who knew? We did not. We really lost it when the man himself, Tommy Wiseau mingled (photo = got) and then gave the weirdest Q & A I've ever experienced. He shook my hand. He pounded Kate Hall's fist. He signed Robin's ticket stub. He signed Stephanie's homemade 'The Room' tshirt. It was mania and it was amazing. We're still recovering.
John slipped out. Luck of draw deals him a flight home.
We have a video to make. What do we do? We get 'Black Chris' (LA legend) to play John Arthur Webb in our macho/non macho Vice Cooler video. I don't know how to describe it so I'm gonna give you bunch of words and you can figure it out: Venice Beach, dogpiles, weightlifting, beer, sun, basketball, american football, arm wrestle, man on man make outs.
What else? Thrifting in the canyons. The best vegan breakfasts at Flores, Silverlake. Robin and I got interviewed in a laundromat for 'Dirty Laundry TV'. If you ever get to 'Tiki Ti's' bar get 'Ray's Mistake'. You won't be disappointed. We climbed the Hollywood Hills and we went 'Animal Style' at In-and-Out Burger. The only style.

We made home till we had to fly to our real home.
Los Angeles people are incredible. Our hosts amazing. So much dispersed creativity in that city. Mellow. Positive. Go get stranded.

Male Bondings' new album Nothing Hurts is out next week via Sub Pop - read our 9/10 review here. And listen to the opening track from it here:


Keep up to date with their adventures and see more pictures from LA in their blog: malebondingblog.blogspot.com. For more up-to-the-minute updates, follow them on Twitter @malebonding.