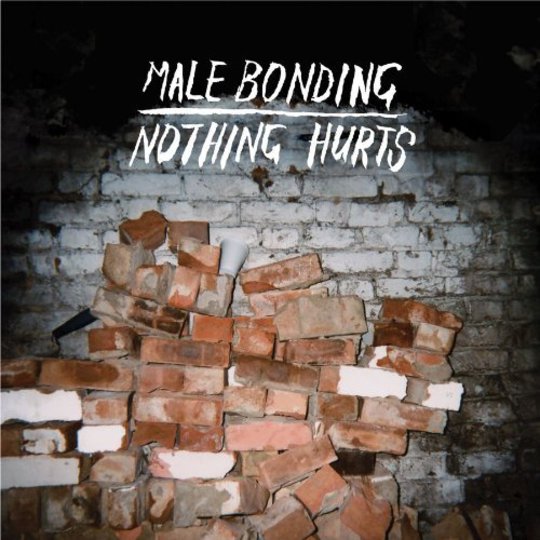 It was late on Sunday, or early on Monday. It's hazy. At Dot to Dot Festival. Last year, in Nottingham. Upstairs in the Bodega. It was one on those chaotic gigs – Abe Vigoda, churning out their tropical punk thing. The atmosphere was close, crowdsurfers kept getting thrown over heads, drinks spilling and looks of glee, while the tired frail tried to steer the airborne masses away from their surrounds. Whether it was because it was the end of the festival, or because everyone was drunk, or just a simple human reaction to those danceable riffs, who knows? Either way, Abe Vigoda kept exchanging bemused glances, as if they'd never seen the like before, down the Smell on a Saturday night.

Whatever it was, that indefinable spirit the crowd had that night is what Male Bonding channel so well. It's as much in the guitar sound (something that is very Skeleton sounding at times – eg 'Weird Feelings') as the feel – that sense of careless joy, where nothing matters much other than the present. How a guitar line can be as erosive as narcotics on the memory. How a good chorus can obliterate.

That said, the future and the past do butt in: “All this won't last forever” is repeated on 'Franklin'. Singer John Arthur Webb, for all the enthusiasm of his vocals in other places, can sound worn and haunted at times on Nothing Hurts, swathed in echoes and full of regret. It provides a grand counterpoint to the exuberance of the music – the lone kid at the side of the dancefloor.

In four minutes of this record there are two tracks that together have more melodies, more moments of joy, than most bands will manage this year. 'TUFF' is a punky sprint, a cowbell rattling between fizzing bursts of riffs and croons of vocals, while 'Nothing Remains' surfs along on backing vocal ooo's and chaotic guitar lines. According to their bio, one of the band's rules is “I like it – shall we try it a little faster?” Why waste time? Nothing Hurts is full of songs that have distilled / evaporated / filtered all the unnecessary, leaving the best and the great.

Everything hurtles here. 'Nothing Used To Hurt' provides brief respite, a churn of guitar shrapnel (a la No Age) giving space for a moment, before 240 BPM verses turn into choruses turn back round again. Thirteen tracks dispatched in under half an hour. It leaves little time for flab, and few reprieves from the noise (until the final track anyway, where the Vivian Girls feature on backing, on a slower, sadder acoustic ditty). And noise it is. Much like the aforementioned events in the Bodega, there's a simplistic thrill to proceedings. Remedial class for musicians – master guitar, bass, drums and vocals. It's all anyone needs some times. If you wanted to, you could call this shitgaze. The primitive production certainly fits in with that aesthetic. Really though, it's just three guys playing music with vim and vigour and energy. Similar bands you may be interested in: Pens, Dum Dum Girls, No Age, Times New Viking, Vivian Girls, Abe Vigoda... You already knew that though.

Out of Our Minds