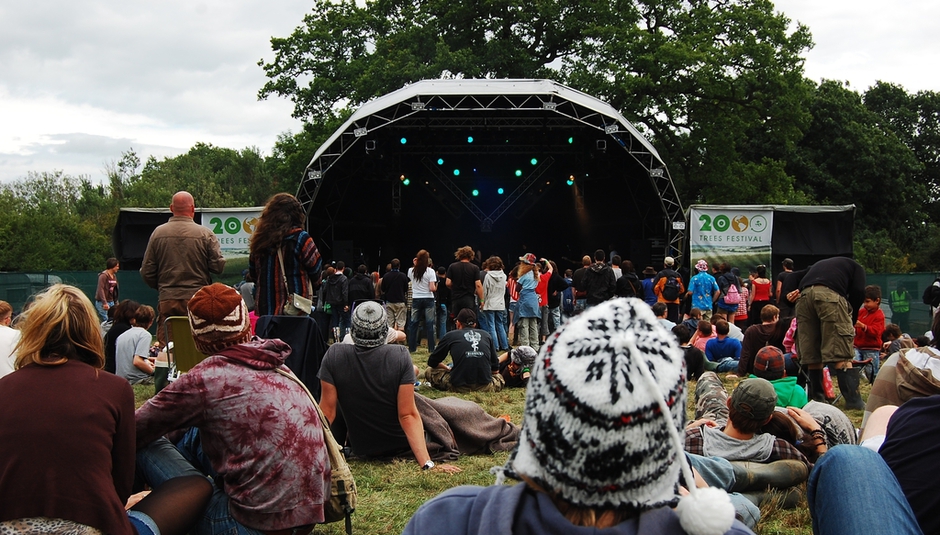 Already featuring a line-up which included some of the brightest stars in the indie-pop world (see: Allo Darlin', Boy Genius, Ballboy, Shrag etc), the first headline act has now been announced. And it's a band that could not fit the aforementioned description much better...The Pains Of Being Pure At Heart will take their fuzzed-up pop to the main stage on one of the three days. Hoo-rah!

Indietracks 2010 takes place from 23 July - 25 July at the Midland Railway Museum in Derbyshire. Weekend tickets are available at an early bird discounted price of £55 (worth every penny, honestly) and day tickets at £30. More information available from here.

From vehicles which travel on rails to those which don't - in Oxford's Truck festival, which has now announced the first 'bunch' of bands to join the previously-announced headliners in Mew. They are: Esben And The Witch, Egyptian Hip Hop, Fonda 500, Future Of The Left, Good Shoes, Lau, Little Fish, Los Campesinos!, Ms. Dynamite, Stornoway, This Town Needs Guns and DJ Zinc.

Funnily enough, this year's Truck takes place on the same weekend as the above Indietracks - July 23-25 - so the chances of seeing Gareth Campesinos! walking around the Indietracks site wearing masks of former Big Brother contestants, as last year, are severely diminished. Though he might repeat the trick for you at Truck if you ask nicely enough.

This actually looks fucking A. I mean, as if Bryan Ferry and Roxy Music wasn't quite enough fill (probably wasn't for some of you to be fair), they've now confirmed this merry bunch:

Lovebox 2010 takes place from 16-18 July in London's Victoria Park and has nothing whatsoever to do with the lead singer of CSS. More details here.

WHAT? A festival? In Ireland? Yes, it's called Electric Picnic, for some reason. If you're in Ireland (and maybe even if you're not...) this would appear to be a top-class line-up. Playing this year will be:

Which is an awful lot to take in over one weekend. A weekend which runs from 3-5 September in the exotically named Laois, Ireland. Tickets go on sale this Friday at 9AM from here. Relevant deets here.

In last week's instalment of the Festival Round-Up, someone complained (quite politely, mind) that we weren't covering 2000Trees. Well, we did previously and we are going to do so now. So there! Whoever you are!

The organisers have confirmed a few bands and acts for the festival's Early Entry Evening. They are Six Nation State, Lets Tea Party and Wotjek Godzisz who was formerly in Symposium as well as Nevermind The Buzzcocks, somewhat amusingly. The Brute Chorus will be Thursday's headliners. This early event thingy is limited to just 500 people, so is pretty exclusive. And cheap. At £10 a pop. A full ticket will set you back a bit more than that, though.

2000Trees runs from 15-17 somewhere near Cheltenham. Probably in a field.

Details and information available from here.

"Das ist der Berliner luft, luft, luft" as the song goes. Should you want to get some of that Berlin air then you can now do so in the company of these acts:

It takes place from 10-11 September at Berlin Tempelhof Airport, which is no longer in operation, if I remember correctly. If it is, then I can't think why you want to have a festival there, what with all those magnificent men in their flying machines being all laut, laut laut.

I could put in the only bit of Serbian-related music I know in here, but I won't. Because it'd be quite crass and unnecessary. As you'd probably expect, this year's Exit festival is wide-ranging in the breadth of its acts and genres they play.

Newly added to the bill are: Placebo, Missy Elliott, LCD Soundsystem, Pendulum, David Guetta, Laidback Luke, A-Track, Dirty South, Black Rose, Riva Starr, Solumun, Ost & Kjex, Wanna Be A Star. They join other notables like SebastiAn, Royksopp, Crystal Castles, We Have Band, Foreign Beggars and a tone more, all of which can be found here.

Exit takes place from 8-11 July in Novi Sad, Serbia. Tickets (at the moment) for the weekend are priced at a reasonable £85, then going up to a still-fair £99 from June.

Oh-yeah! Isn't it annoying having to copy and paste characters which don't appear naturally on your keyboard? Arguably Norway's finest festival, also arguably NOT, this new bunch of additions aren't quite the icing, but what went before was MEGA, anyway.