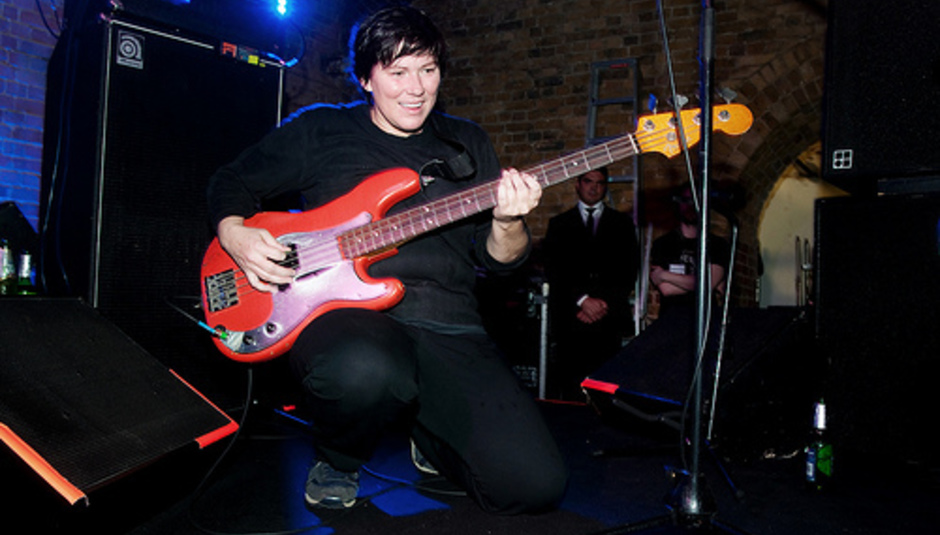 Though the horribly ungrateful wannabe hipster part of DiS’s brain was annoyed to note that a leisurely early afternoon train to Brixton and some suspiciously fortuitous scheduling would have allowed us to see Blur’s Rough Trade gig first, it was with the expected amount of glee that we last night mooched along to the Village Underground in Shoreditch in order to witness an invite-only gig by the band known as the Pixies.

Actually, there was a degree of trepidation: the Pixies reunion juggernaut seemed to have officially wound down some time ago, Frank Black/Black Francis and The Breeders returning to active service, rumours of a new record quashed once more. On Sunday they randomly played at The Isle Of White Festival, a date so incongruous that most fans would probably have got quite angry with the band if they weren’t doing it for the money.

Last night’s show was the official launch of much spoken-about boxed set Minotaur, a two foot tall monster that’s as much a showcase for the works of Vaughan Oliver - the graphic designer who created the artwork for the band’s four albums and one EP – as the music itself. The $500 Limited Edition does indeed seem to be taking seminal alt. rock as close to a lifestyle accessory as it’ll ever go, seeing as how it weighs about 15 tonnes and stands about 20ft high, and even Black is quoted on the release as saying it resembles a coffee table book than anything. (It looks AWESOME, mind).

Anyway, despite the band’s undoubted admiration for Oliver, we were steeled for some going through the motions. No sir. The band were circulating through the audience beforehand, jotting down requests on bits of paper de-corporatising the air of the gig no end, and made for what must surely be the most friendly night of interplay between Kim and Black since the late Eighties, her jokingly trying to duck ‘Gigantic’, hamming up the ”whooo” intro to ‘Where Is My Mind?’, the entire band chuckling as they failed to agree on which version of ‘Wave Of Mutilation’ they were playing. The setlist was:

Where Is My Mind? Doubtless you know/saw enough of the last reunion tour to be well aware the Pixies are still very, very good at playing Pixies songs, and a full review would be kind of gratuitous: they were frickin’ awesome.

However... what DiS wants to know is where the hell are they going with this? They were clearly rehearsed enough to take requests, which would speak of more than one ker-ching festival set and a short industry do, and Kim’n’Frank were clearly enjoying each other’s company way more than the dysfunctional duo depicted in loudQUIETloud. If they’ve gotten this good and this relaxed around each other and are still only content to play the old stuff, maybe it’s about time that they did call it a day, that Minotaur’s bulk serves as a headstone for The Pixies’ career: they have nothing left to achieve or prove except making a new record, and if they’ve come this far and aren’t going to do that, really this reunion lark will end up looking tacky, good as it is.

Or maybe, just maybe, Minotaur can serve as a demarcation stone, a summary of everything the Pixies were that frees them up to have a future, even if they will never make another Doolittle. Whatever the case, this didn’t look like a band that was over just yet.

Stay tuned for more photos from the night from the wonderful Lucy Johnston, plus hopefully commentary form Vaughan Oliver himself on Minotaur and the art of the Pixies